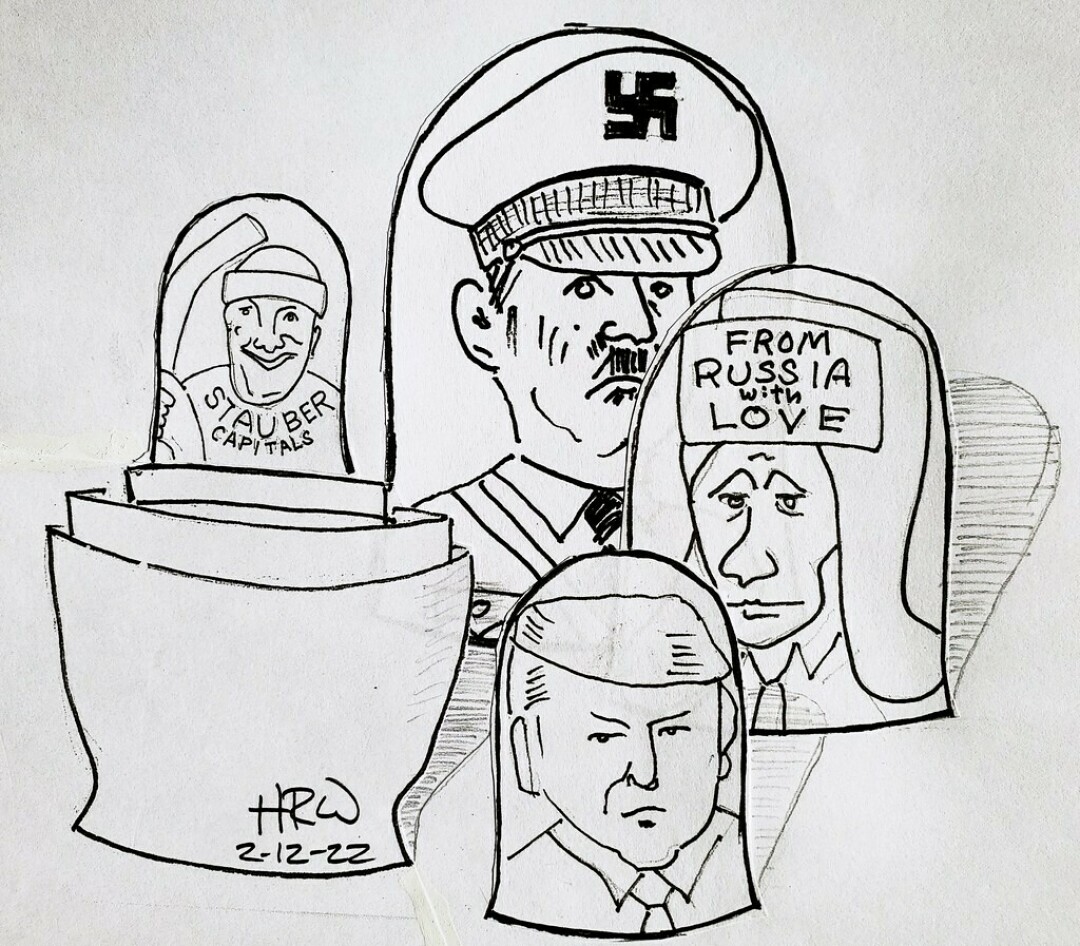 Congressman Pete Stauber wrote recently under the hashtag: #OurWayofLife, “Together, let’s defend our way of life, take back our country, and rebuild our future.”

Whose way of life Pete? The trade unionists, the socialists, the Jews? How about the voters?

Your President Trump, whose pocket lint you have been picking for five years, doesn’t like it when the voters call the shots. Your Donald Trump is an interesting animal.

When an assortment of fascists marched through Charlottesville in 2017 carrying tiki torches and chanting “Jews will not replace us,” how did our first President with Jewish grandchildren defend his little ones? He called the Jew baiters “good people.”

I’m sure Pastor Niemöler was rolling in his grave.

Unlike Trump in 2021 I accepted his victory in 2017. I didn’t move to Canada. My country had not been taken away from me. But after years of watching Pete’s kind of Republicans fiddle with elections I wonder if Pete’s way is a country that includes me.

As I write this Vladimir Putin’s army and navy surround the nation of Ukraine that Trump leaned on to help him win the 2021 election. Poor Ukranians. By next week Trump’s hero may plunge the world into the costliest war since my Dad went off to fight in 1943.

Throughout his presidency Stauber’s man Trump showed deference to a succession of the world’s most corrupt dictators and strongmen like North Korea’s Kim Jong-un, Brasil’s Bolsonaro, Philippine president Duterte, “Jina’s” Xi, but above all Trump groveled at Vladimir Putin’s feet.

These men all fit that description and Donald Trump is not far behind. I have probably missed 40 to 60 mail deliveries since Trump appointed Louis DeJoy as our nation’s 75th U.S. postmaster general.

Evidently the President wanted to make sure absentee ballots weren’t delivered to election officials in time to be counted. The man’s a genius.

As a kid I thought the glory days of such tyrants like Hitler, Mussolini, Tojo and finally Stalin were a thing of the past. Then we elected an unscrupulous narcissist incapable of telling the truth who wanted to get in on the act.

Trump world has kicked American corruption to a level not seen since the Gilded Age between the Civil War and Teddy Roosevelt 1860-1900.

Until his election I wouldn’t have guessed that Pete Stauber would willingly be an enabler to such a man. Pete’s only infamy up to his election was getting the smallest college hockey team in history the biggest prize in college hockey – a 1988 Division One championship by not getting caught cheating.

Wikipedia quotes a sport’s reporter as saying what Pete did was: “risky, arguably crafty, and inarguably illegal.”

Cheating, like drugs, starts small. First its lifting your own goal post off its pins when the ref isn’t looking, then its stealing an election. Pete’s team visited the Reagan White House which Pete said set him on the path to Congress. He must have missed it when Ron told the Ruskies to “tear down this wall!”

So, what are the ways of Pete’s kind of people?

He hasn’t said boo about the Jan. 6 crowd who tore down the blockades in front of the nation’s Capitol and beat his fellow police while boasting of their plans to lynch Vice President Pence.

They are in hiding now disguised as anti-maskers blocking North American highways to cripple Biden’s, and our nation’s, economy. They are like BLM and anti-Vietnam war protesters only they’ve been strangling the economy for a week.

That’s not my way of life. Whose is it? Hitler’s people did Kristallnacht and burned down the Reichstag giving Adolph the Chancellorship in 1933. That was Hitler’s way.

What is Pete Stauber’s way?

If Pete Stauber fit into a set of Matryoshka dolls he would be the littlest. Me too, only my set would include General Dwight David Eisenhower, Teddy Roosevelt and Lincoln.