Walk a mile in Russia’s shoes 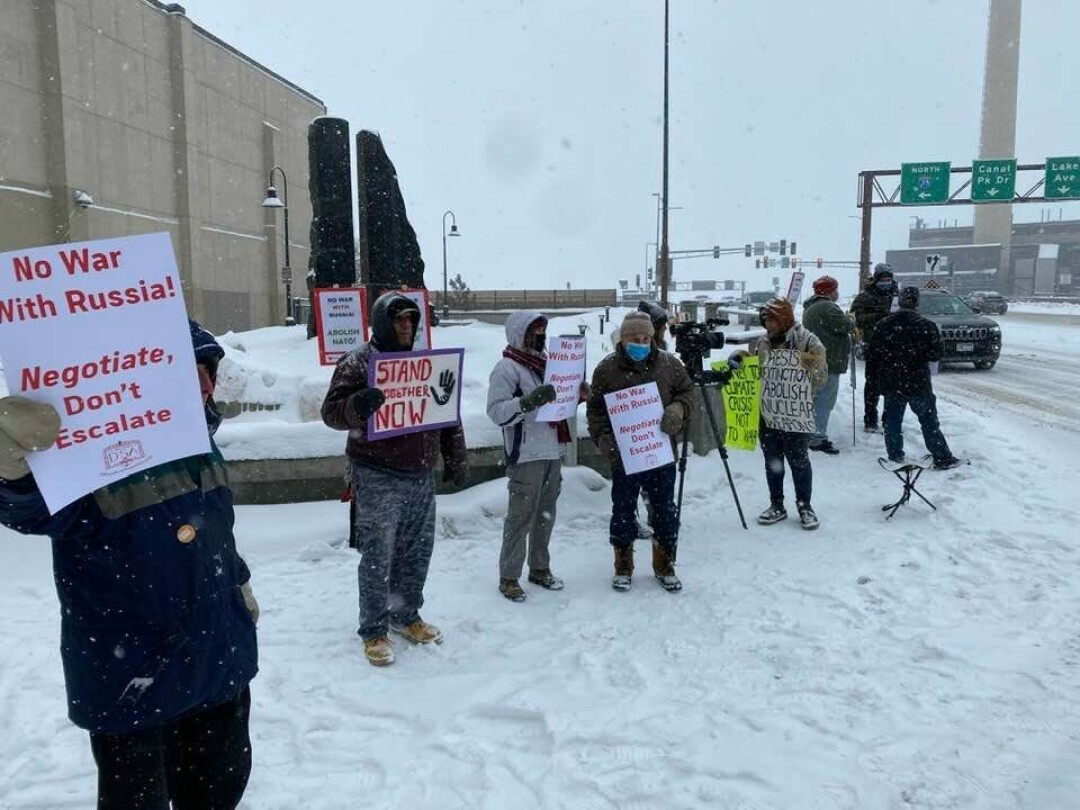 Northlanders held a No War With Russia protest in Duluth Feb. 5.

I like to read historical novels. I also like a category of historic novel called counterfactual or alternative history. This is a way of looking at history that asks “what if” questions and postulates different outcomes than actually occurred.
The mental exercise of counterfactual history can provide a broader perspective on world events.
This genre of fiction is often futuristic. In this article I ask the reader to imagine a fictional story about the United States in the near future. This story illuminates current events happening today.
Image that the United States – the world’s last remaining “superpower” – has fallen on hard times. The American empire is in decline.
As most empires in the past, the United States has militarily overextended itself. The huge expense of maintaining “full spectrum dominance” across the entire world has bankrupted the country. The national debt has exploded. The economy has crashed again. Other countries, especially China, are expanding their technological, manufacturing, trading, banking and diplomatic connections around the world.

In short, while other countries took care of business the business of the United States was war. We are now paying the price.
The costly, humiliating defeat in Afghanistan is cited as the “last straw.” But there were many other wars and many other factors that led to the country falling apart. The extreme social, religious and partisan political divisions created gridlock that prevented legislative solutions and effective governing.

The rise of far right, racist, armed militias and other hate groups added to the toxic mix. The profit-dominated news media and the widespread acceptance of social media destroyed the concept of objective facts. Lies became truth and demagogues controlled what people believed.
So the country dissolved. California left the union and became the 5th largest economy in the world. Washington and Oregon being “liberal” states joined California (although the eastern parts refused and became part the Rocky Mountain Confederation): The fundamentalist “Bible Belt” states, led by South Carolina, seceded from the union forming small, economically marginal, poor theocracies. Alaska being 2/3 permafrost melted – but who cares?

The remaining eastern and mid-western states became the new American Federation.
Texas, the focus of our story, reverted back to the former Republic of Texas. But dominated by a wealthy, corrupt oligarchy it has not done well.
Driven by claims of election fraud (and foreign interference), there have been two “elected” governments overthrown by mass demonstrations. The most recent resulted in a right-wing government supported by violence from white supremacist, neo-nazi militia groups.
The more liberal populations of Austin (which speaks English and has cultural ties with rest of the country) and San Antonio (proudly bilingual) have broken away and voted to reunite with the American Federation. In short, Texas is in the middle of a civil war.
Because of the large military bases in San Antonio and a naval base in Corpus Christi, the American Federation invaded and annexed these areas.
Contributing to the mess in Texas is foreign intervention. Russia has been using the breakup of the United States to increase its influence in the western hemisphere. It has expanded the Warsaw Pact military defense alliance (a relic of the former Cold War) to three former U.S. states and to 12 countries in Latin and South America. California, Washington, Oregon, Mexico and Cuba have deployed Russian troops and missiles and frequently hold joint war games in the Caribbean.

Russia wants Texas to join the Warsaw Pact. Russia has funded various factions in Texas under the guise of promoting “democracy.” More recently they have provided military assistance and more than $2 billion dollars in military arms and equipment to the current Texas government.
There have been efforts by the Organization of American States to mediate a settlement to the civil war in Texas. An agreement was reached several years ago but none of the parties have followed through on their commitments and the conflict continues.
The American Federation insists it will not tolerate Texas joining the Warsaw Pact or preventing San Antonio and Corpus Christi from returning to the American Federation. They have amassed 100,000 troops on the Texas border. War between the two largest nuclear powers is dangerously close to happening.

By now you have guessed my story is about the current situation in Ukraine. The story is fictional but the underlying facts and events are an accurate history of the Ukraine crisis.
You may think this story unrealistic or exaggerated, but there is a real historical event which unequivocally shows how the United States would react if this story were true.
In the 1962 Cuban Missile Crisis our response to Russian troops and nuclear missiles 90 miles from our coast was to mobilize for war. Our nuclear arsenal went on full alert. Troops for an invasion were moved to the coast. A naval blockade was imposed. We were prepared to incinerate the world if the missiles were not removed. Luckily for the world Russia blinked first.

The current crisis in Ukraine is one more example of our aggressive, militarized, hypocritical foreign policy. If the situation was reversed we would be doing exactly what Russia is doing today and probably much more aggressively.
The ongoing civil war in Ukraine will not be solved by the U.S. pumping weapons and money into the conflict. Expanding NATO to include Ukraine (not just on Russia’s doorstep but a former part of the Soviet Union) is dangerously provocative and can only intensify the tensions. No one will be more free or secure by these actions.

One can easily image a better scenario than escalating the dangerous tinderbox in Ukraine. The Biden administration could easily stop the saber rattling and the shipping of weapons to Ukraine. They could cancel plans for Ukraine to join NATO. They could actively work to implement the 2015 Minsk Accords that called for political solutions and limited autonomy for the Donetsk and Luhansk areas of Ukraine.

Better yet the Untied States could simply get out of the way and let the U.N. or some of the European countries mediate a solution.
“You can’t understand someone until you’ve walked a mile in their shoes.” If President Biden and his advisers would walk 10 paces – much less a mile – in Russia’s shoes they might be able to imagine a peaceful ending to the conflict in Ukraine. 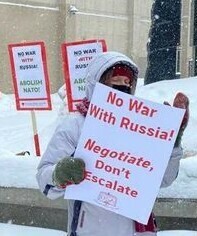