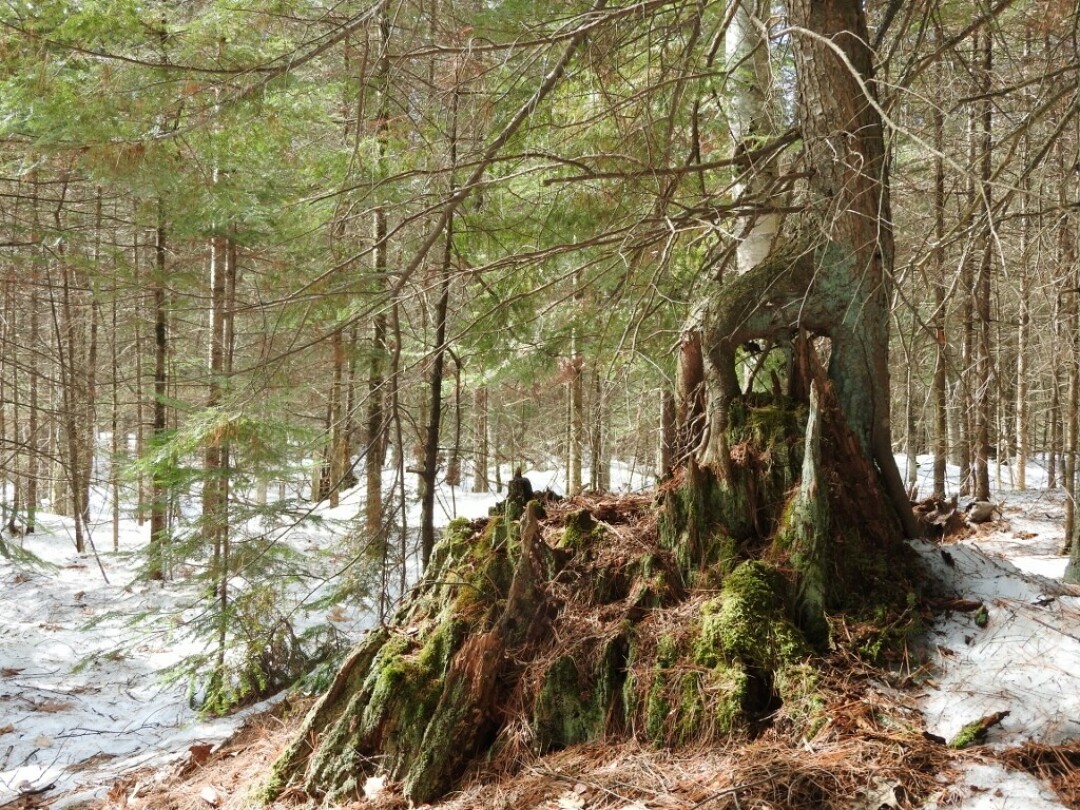 Nurse stumps are warm, damp places where seeds of hemlock, birch and more can find a slightly more hospitable place to germinate. As the stump rots away under the new tree, roots often form funny looking knees. Photos by Emily Stone.

At the trail intersection I turned left, looked up, and paused for just a moment to appreciate the dark green lace of the hemlock thicket in front of me.

Several “redwoods of the east” towered elegantly in a grove. Beneath them, broken-topped boles wore the same dark brown furrowed bark. And filling in between were young hemlocks of all ages lending a shimmer of green to the mostly black-and-white forest.

This is one of my favorite spots along the trails of the Forest Lodge Estate. Mary Griggs Burke, the Cable Natural History Museum’s founder, bequeathed her 872-acre retreat on the south shore of Lake Namakagon to the Forest Service for research and education. Northland College manages access.

I often guide hikes. The crunching of a dozen snowshoes behind reminded me that I wasn’t alone in this special spot.

Why is a grove of bushy baby hemlocks so special?

Here in northern Wisconsin, we are at the far edge of eastern hemlock range. Just a few outliers exist farther west and north, but the heart of their habitat extends up Appalachia to the northeast.

Perhaps the trees just haven’t had time to migrate back after the most recent glaciation plowed them away – only 14,000 years ago or so – or maybe the moisture runs low as the rain shadow of the Rocky Mountains creeps in across the plains.

Even in places where hemlocks are abundant, white-tailed deer often nibble the young ones to death and regeneration can be spotty.

We admired the thicket – that has somehow escaped the deer –and breathed in the magical, primordial air (is that being overly dramatic?). Then a bitter gust off the icy lake set us moving again.
Just around the corner two grayish, old paper birch trees caught my eye.

At first glance paper birch and eastern hemlock are about as different as trees can get.
There’s the bark, of course: smooth, pale, relatively thin and peeling, vs. thick, dark, corky ridges. Also their leaves, and the fact that birches lose their broad, bright green suncatchers each fall while hemlock holds on tight.

Hemlock holds onto life a lot longer in general – growing for hundreds of years – while birches live a more human-scale existence of mere decades.

Over those centuries, the acid in hemlock needles washes nutrients out of the soil, while the rapid decomposition of birch leaves results in soils enriched in Ca, Mg, K, Mn, Fe…an alphabet soup of minerals.

One of the first things I learned in botany class was that hemlocks are the most shade tolerant tree in their range, while paper birches are at the other end of the spectrum, only exceeded by aspen and pin cherry in their demand for sun. Plus, paper birch is near the southern end of its range here but extends north to the edge of the treeless tundra. 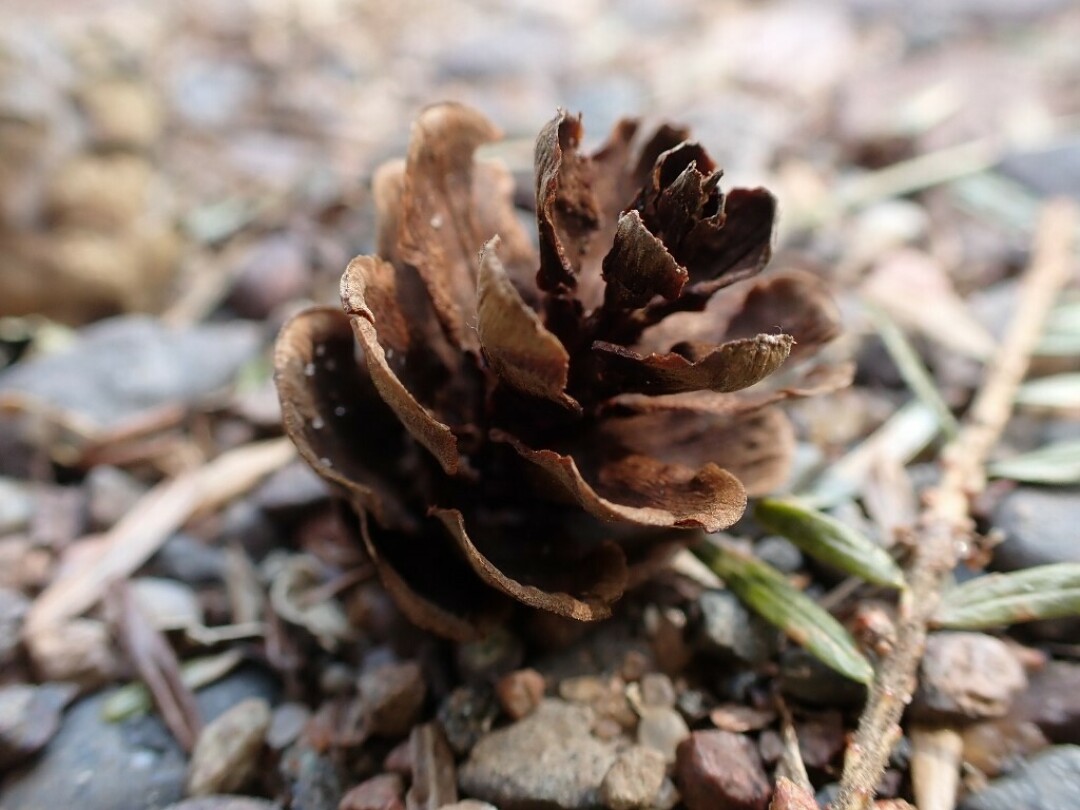 Inside this tiny eastern hemlock cone are even smaller seeds that need a little bit of luck to ever become a tree.

And yet, here the two species were, growing just a few steps apart in the Northwoods.

A few more steps down the trail, I spotted one of my favorite teaching spots.

Under heaps of snow were the spiked turrets and sloping sides of a hemlock stump, likely rotting since 1888 when this area was clearcut by the Northern Wisconsin Lumber Company. From that stump rose a slender young hemlock tree, only a few inches in diameter and maybe twice as tall as me. And, brushing away the snow, I revealed another piece in the puzzle: the grayed bark of a long-dead birch tree, it’s knee still hooked over the edge of the old stump where it had once grown, too.

Not even steps away, this odd couple had almost been hugging.

This scene tells not of the trees’ differences, but what they have in common.

Hemlocks bear their seeds in tiny cones, not unlike the cylindrical catkins of birch, which are just more fragile and ephemeral. And inside each structure are tiny seeds flanked by papery wings.

Those seeds mature in late summer, and drop throughout the winter, sometimes skittering over crusty snow in a race to get farther from the crushing shade of their parent tree.

While both species produce lots of seeds almost every year after they reach age 15, they face equally poor odds that any one seed will ever germinate, survive seedlinghood, or become a new tree.

One thing that increases the odds of successful germination in both hemlock and birch is lucky landing on the spongy surface of a rotting log or stump. Here – like on my friend who died in 1888 – the moist environment, relatively warmer temperatures above ground level, and protection from pathogenic fungi – result in a cozy nursery. Without the benefit of a nurse log or nurse stump, the trees would need bare soil, consistent moisture, and a lot more luck.

With that in mind, maybe it’s not so crazy to think that the hemlock grove we passed earlier – where they have somehow, against the odds, sprouted like crazy – does have a little magic in the air.

Emily Stone is Naturalist/Education Director at the Cable Natural History Museum. Her award-winning second book, Natural Connections: Dreaming of an Elfin Skimmer, is now available to purchase at cablemuseum.org/books and at your local independent bookstore, too. For more than 50 years, the Cable Natural History Museum has served to connect you to the Northwoods. Visit our Mysteries of the Night exhibit before it closes at the end of February. Follow us on Facebook, Instagram, YouTube, and cablemuseum.org to see what we are up to. 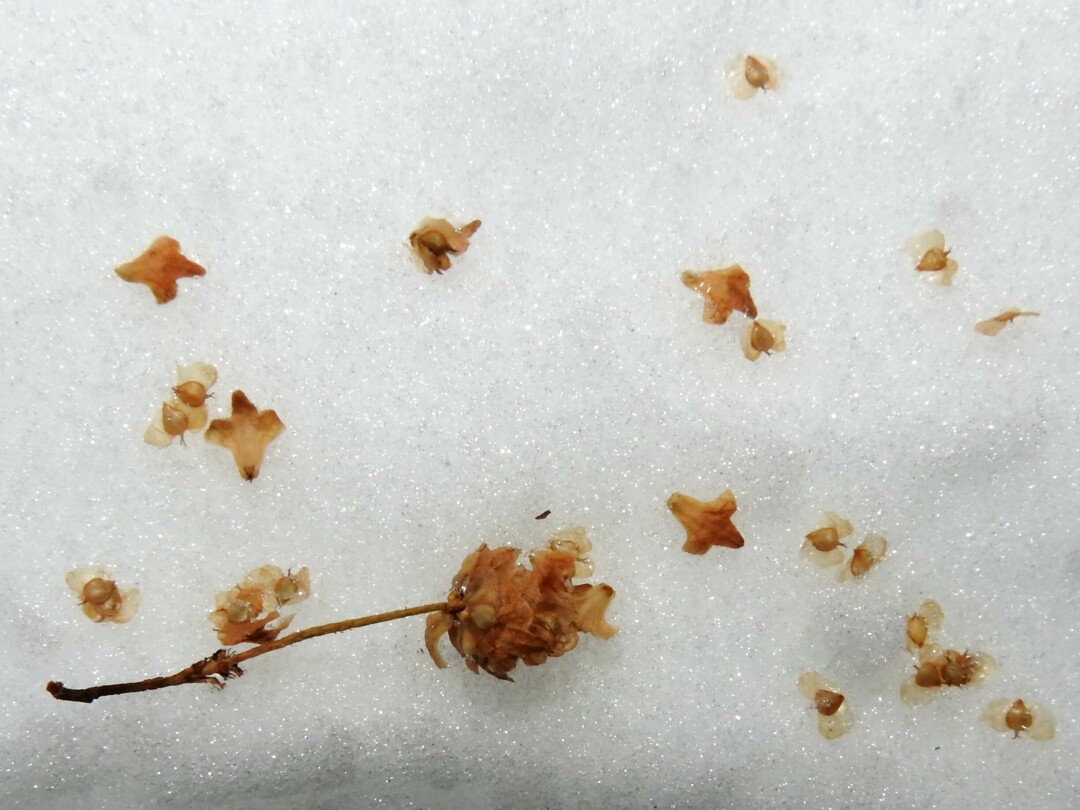 Inside the cone-shaped catkins of birch are their tiny, winged seeds. Four-pointed bracts protect the seeds until it all falls apart. Photo by Emily Stone.