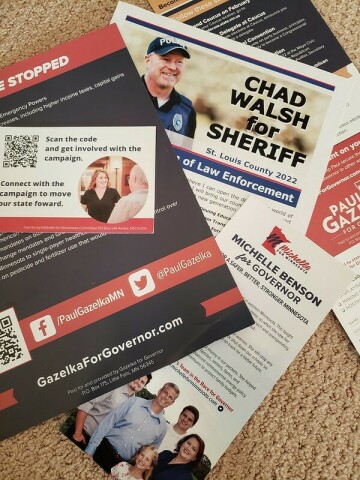 After near perfect attendance at 15 straight Minnesota Republican precinct caucuses through the end of the 20th century, I attended a couple DFL caucuses. The best of these was the year I supported Obama’s nomination for President and hundreds of his supporters joined me at the now demolished Woodland Junior High.

It was wonderful not finding myself being outvoted on gun, gay and Roe v Wade resolutions 10 to 1.
Those who have followed me in The Reader for 20 years when I was still a nominal Republican have read tidbits about my journey through the political wilderness. It's no fun going to meetings where nice people think of you as a “baby-killer.” My mother, father, brother and sister were, too. Ditto the Republicans on the Supreme Court who gave birth to Roe vs. Wade.

I could see the mostly unmasked Republicans in the cafeteria’s windows as I entered Ordean East. Right across from them two DFLers were seated to direct the few DFLers who didn’t want to zoom to their caucuses.

On my side, in a tiny crowd of about 50, I saw a couple of the old Republicans I used to caucus with. If they recognized me, we didn’t acknowledge each other. I was, however, recognized by the Minneapolis Star Tribune’s reporter Jana Hollingsworth. She formerly covered the Duluth School Board I served on for the Duluth News Tribune. Her first question was whether I was in the right convention. I assured her I was in the right room.

Then she asked me which of the Republicans I would be supporting for Governor. “Walz,” I told her. She did a double take. Prodded again, I told Jana I always voted for people I agreed with. I didn’t mention my proud vote for Democrat George McGovern in my first election as a Republican.

When Jana looked at me skeptically I reminded her that Lincoln had a Democratic Vice President on his ticket when he ran for reelection.

Jana asked if I was planning on running for office. I told her elusively that I had a lot of experience doing just that. I pointedly looked at all the unmasked Republicans and told Jana I hoped I was not the only person present who was outraged by the attempted overthrow of our government on Jan. 6. I added, “I might be the odd man out.”

Only three of us attended eastern Duluth’s once healthy Republican 9th precinct. It reminded me of my first post-Watergate caucus in Duluth in 1976.

It was held in the YMCA covering western Duluth’s Republican desert. I was thrilled to see 13 people in our room. Then I discovered that we represented 10 precincts. Republicans lived in Duluth’s East. At least they used to.

The measly three Republicans in a former Republican bastion suggested a grim election coming for Republicans.

Our caucus procedure hadn’t changed. Our official “convener” was the son of an admirable old Republican. He was from a different precinct and seemed not to worry that he might miss being nominated to attend the next level of conventions.

None of our attendees jumped at the request to do any volunteer work for the party. We were told that in a Trump year, 53 people flooded the caucus. It was a great number but they all left minutes after arriving and voting in the Presidential straw ballot. Trump people weren’t “into” the party.

Perhaps Abe Lincoln’s tradition of stopping states from seceding put Trumpers off. At least the Obama supporters stuck around in 2006.

Before we began, we were asked to confirm that we stood with Republican principles. As an “originalist” Lincoln Republican I felt my credentials were beyond question.

As for today’s Republican principles – there aren’t any. In 2020 the National Republican Party didn’t pass any platform at all. Until Trump, every major political party has drawn up a platform so the nation could know what they stood for.

Without one, the only thing Republicans stand for is “Trump,” whatever that means.

Platforms do change over time. When I attended my first Minnesota’s GOP Convention. the platform was pro-choice on abortion. I still agree with it.

As for the Republican party’s Pro-Life position, after almost a million Covid deaths, I’m not impressed.

Until a vaccine is available for infants I’m inclined to keep wearing masks to protect them from my passing on a death-dealing virus. It was the unmasked pro-lifers on caucus night that were the biggest threat to the unvaccinated. Not me.

Our business done, I got home in a record 50 minutes. Before I left, I asked the two fellows at the DFL booth how their attendance had been. I told them, based on our numbers, that the Democrats should feel good about their prospects in the next election.