Will book burners burn the planet? 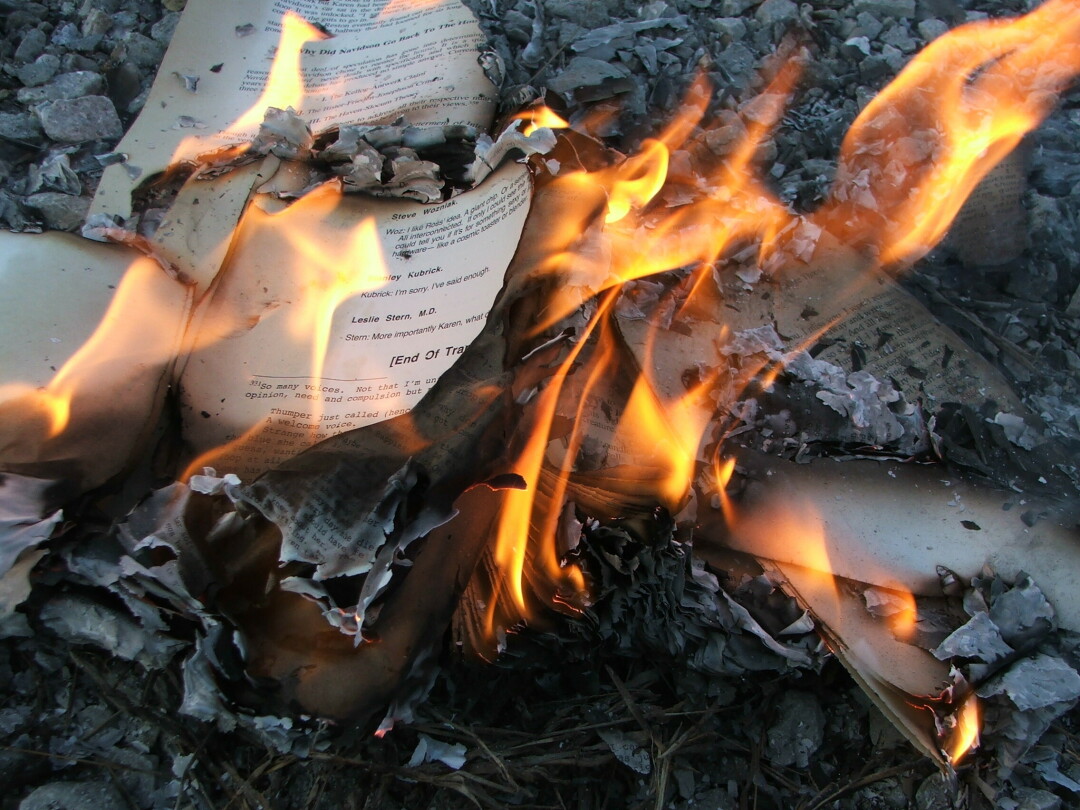 A final battle between education and religion

After thousands of years, knowledge has trumped ignorance. Elmer and Lima have finally overcome the idea that they were both “intrinsically disordered” from birth and shouldn’t be allowed to raise children. The two have great instincts and have passed all the tests preparing them for parenthood.

They both took good care of the dummy baby they carried around. Never dropped it. They conducted themselves well at several interviews by inquisitive officials at the adoption agency. They proved they had enough support to raise a baby adequately.

They met Pete and Chastain, who had gone through the same tests to adopt their baby at another agency. They learned some interview techniques from them.

So Elmer and Lima, same sex Humboldt penguins, brought their baby home to their condo at the Rosamond Gifford Zoo in Syracuse, New York, after taking turns incubating the egg taken from a neglectful set of different-sex parents.

Our Secretary of Transportation Pete Buttigieg and his husband Chastain live in Washington with their child adopted about a year ago after their same-sex marriage in South Bend, Indiana, where Pete was mayor. He ran for the presidency in the 2020 campaign.

Several years ago the Norwegians decided to examine how many top animal species had homosexual members. The research was discontinued after discovering every species in the top 1,500 had homosexuals.

Most of the seven greatest religions have accepted the Vatican erroneous line that homosexuals are “intrinsically disordered” and are committing sins of the flesh if they have sex. We could have up to 700 million homosexuals in the world.

Practically all surveys say that 5 to 10% of the world’s human population is homosexual. Although the Vatican had a coterie of gay priests for decades, the conservatives of the Vatican refuse to recognize that genetic fact.

Christian fundamentalists and conservative Catholics have been used by Republicans for years for another culture war to establish political power. It took the Vatican 400 years to apologize to Galileo. I would guess it would take another 400 years for the old ignorant men of the Vatican to apologize to the world LBGTQ+ community.

Education is finally beating religion on this human issue.

What is the Trumplican Party against?

Joe Biden wanted to know what Republicans are for. Joe just doesn’t seem to understand with his Senate brain that they want only one thing: POWER.

They have no incentive to govern. It’s too much like work. They only want to RULE.

I see the Minnesota Republican Party has only three policies to discuss for this session of the legislature: crime, public safety and education.

Here’s a short list of what policies for the common good they are against:

Nina Turner, a Black state senator from Cleveland, is my second “most favorite” politician. She often appears on national TV shows to defend Democratic policies, attack Trumplicans with gusto, introduce my most favorite politician Bernie Sanders, and tells the most gawdawful truth about what is happening in America.

If she were a martial arts fighter, she’d kick men in the balls immediately. She is now running for the U.S. House – and the House needs her. She doesn’t mince words: “People deserve a good life. And there are some components to that: having health care, having clean air, clean water and clean food. We’re talking about the bare minimum things that people not only in the United States deserve, not only in the greater Cleveland district deserve, but that people all over the world deserve. At some point, when the die is cast, you have to take it to the streets.”

In other words, a national strike by all workers until you get what you need. Is there a better political platform anywhere?

There are ignorant, stupid, uninformed people at elite universities

Some of the rich and super-rich send their sons and daughters to the Wharton School at the University of Pennsylvania so they can learn how to handle the millions the parents have acquired. It was once called a school of finance.

It costs a lot more than $100,000 a year at the undergraduate level. That tuition tends to keep the riff-raff out. Wharton students generally have no idea what life in the trenches of the American poor and middle class is all about.

In a recent poll taken by an assistant professor, Wharton students exhibited what little they know of the rest of society. Nineteen percent of the students come from the top one percent. Only three percent come from the bottom 20%. A quarter of the students thought the average American made at least six figures annually. One suggested it was $800,000! The real figure is $53,838.

Also, a majority of congresspersons are millionaires. They have no idea why ordinary households can’t buy homes, cars, why students have so much college debt, and why medical bills cause bankruptcies.

Fred Trump, Sr. wanted son Donald to go to Wharton to learn finance after attending Fordham for two years. He personally escorted Donald to Wharton and likely parted with money to get him in.

Professor William Kelley said Trump “was the dumbest goddamned student he ever had at Wharton.”

At the time not-so-bright Donald recognized his flaws and had hired a smart student to take his SAT entrance tests. In her book Too Much And Never Enough, How My Family Created The World’s Most Dangerous Man, his niece Mary Trump, who earned a PHD in clinical psychology, describes him as a sociopath: “His pathologies are so complex and his behaviors so often inexplicable that coming up with an accurate and comprehensive diagnosis would require a full battery of psychological and neuropsychological tests that he will never sit for.”

Will billionaires save the country when they don’t even know what’s enough?

Billionaire Leon Cooperman started the hedge fund Omega 20 years ago when he was 58 years old. Now he is worth billions.

He is one of about 760 American billionaires whose wealth has grown 70% since COVID-19 started – and since millions of workers have lost their jobs, cars and homes.

Those billionaires equal the assets held by the bottom 60% of households.

Leon spends most of his day, sometimes from 7 am to Noon in his office checking on his stock market gains. He watches several computer screens centered on Wall Street. He calls his trader in New Jersey every two hours to see how his stock investments are doing. Sometimes he gains as much as $7 million in two hours.

Born low middle class in Brooklyn, he and his wife now live in a $5 million home with a huge infinity pool he built in Florida five years ago. He has never swum in it.

He lives in Florida for exactly 183 days a year so he doesn’t have to pay New York taxes. He seems to be proud that his wife’s walk-in closet is as large as the Brooklyn apartment they used to live in.

This Leon quote from an article by Eli Saslow titled “The Moral Calculations of a Billionaire: “I don’t want to say it’s all play money at this point, but what else could I spend it on?”

Leon has been earning more than what his family could spend since 1975. He thinks making money is like a Monopoly game he can win. His money tends to grow beyond his own comprehension.

Leon constantly goes through e-mails and letters requesting money for politicians, projects, to cover personal tragedies, medical bills – and thousands of other requests.

He tends to act like a normal guy. He says he is not a Bill Gates who buys private islands, or a Ken Griffen who bought a New York penthouse for $238 million (the most expensive, so far), or a billionaire Steven Schwarzman who spent $10 million on his last birthday, or buy a stuffed 14-foot shark for $8 million like billionaire Stephen Cohen, or a Mark Zuckerberg of Facebook who spends $23 million on personal security each year, or a David Geffen who often spends $1 billion a year on art, or a Larry Ellison of Oracle who bought a Soviet fighter jet, or a Steve Wynn who paid $215 million for a yacht with helipad, or a private train like John Paul DeJoria, or a 600-foot flying airship like Sergey Brin, or rockets and spaceships to the moon and Mars like Elon Musk and Jeff Bezos. (A superyacht averages 7,000 tons of carbon dioxide each year.)

Leon peddles a 25-year-old Schwinn around the neighborhood and drives a Hyundai to pick up groceries and run errands.

What about politics, capitalism, socialism and working for the  common good?

Leon is the son of a plumber’s apprentice who dropped out of high school; his wife the daughter of a Romanian pillowcase salesman. They met at Hunter College when tuition was $24 a semester. He likes to joke he has a PhD in Poor, Hungry and Driven.

He and his wife have given away hundreds of millions of dollars to hospitals, colleges and universities, student scholarships, Jewish family funds, nursing schools, food banks and other charities.

Leon says: “I could buy a Picasso for a hundred million, but it doesn’t turn me on, so then what?”

He says he is an independent and voted for Biden. He loves capitalism and hates any aspect of socialism. He claims he pays a 34% tax rate.

But, as he sits for hours at his computer screen, watching his fortune grow by the minute, Leon doesn’t seem to realize or know an American child born in the 1940s had a 90% chance of surpassing what parents made at his age, escaping hunger, depravation, and poverty.

In 2022 a poor child born in the 21st century has only a 43% chance of earning as much as his parents, among the worst rates in all developing countries. The American Dream is more like a nightmare. Leon asks: “What’s enough? What’s the answer?” As he considers “what is enough,” he has made $2.6 million in the last five hours. That is equal to the average net worth of 23,000 American families. As nearly half of those American families are living paycheck to paycheck, the answer to income inequality is not that difficult. Perhaps Leon could find the answer by shutting off his computer and visit “paycheck” families in Florida and New York.