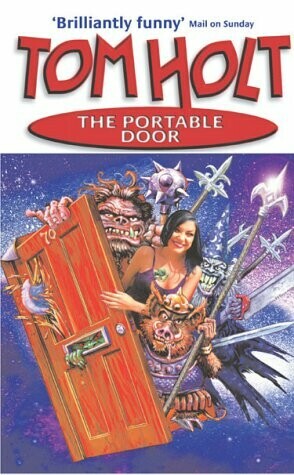 This is a set of seven books, beginning with The Portable Door, all connected to The JWWells Company in one way or another. The books may be read separately, but the plots are complicated, and there are many recurring characters.

The first book introduces most of those characters, and I will try to do that without spoiling too many of the surprises. The books are well worth reading, and are very funny in spots.

This quote, from Gilbert and Sullivan’s The Sorcerer, is the inspiration for the series:
My name is John Wellington Wells;
I’m a dealer in magic and spells,
In blesses and curses
And ever-filled purses,
In prophesies, witches and knells,
If you want a proud foe to make tracks,
If you’d melt a rich uncle in wax,
You’ve but to look in
On the resident djinn—
Number Seventy, St Mary Axe…

Book #1 The Portable Door: In which we meet Paul Carpenter and Sophie Pettingel, an unlikely duo who have been hired as Junior Clerks at JWWells Company. JWWells has chosen to introduce them to the company business by the photographic method – put them in a situation and see what develops.

Paul is a young man who is very concerned about doing the right thing. He also isn’t very bright, and he never reads anything unless he is forced to. This includes some very important things, like his employment contract. He also has a tendency to fall in love, which he does with Sophie, who appears to loathe him from the beginning.

Sophie is a thin girl with some weird habits. She also didn’t read the employment contract, but she does read all the instruction manuals.

Their first nasty surprise is that goblins own the building at 70 St. Mary Axe.

The JWWElls letterhead lists the partners: JWWells is the founder and is still on the books. They know he isn’t dead, but he hasn’t been seen for 130 years. He is a Master of Arcane Arts.

Humphrey Wells, the Senior Partner, is an Associate of Thaumaturgical Practitioners, Paul and Sophie go on a job with him, and find that he is a profoundly evil man.

Professor Van Spee is an old man with white hair around his ears and a white goatee. He is a professor of witchcraft and works with spacetime.

The Contessa Judith di Castel’Bianco is Queen of the Fey, which is a kind of fairy. She is in charge of the Entertainment Division.

Cas Suslowicz is an Elemental Engineer, so he is in charge of the construction of magical buildings, like castles in the air. He is also a giant. A SHORT giant, Mr. Tanner insists.

Rick Wurmtoter, is a Knight of the Holy Grail and a Dragonslayer. As the resident hero, he is responsible for pest control.

Mr. Tanner has BG after his name, which stands for Boss Goblin. He is in charge of the Minerals Division. His mum, Rosie, is a shape shifter who mans the reception desk as a beautiful woman. She takes a shine to Paul, and is always trying to seduce him.

Paul finds a JWW Portable Door in his desk drawer. It takes him wherever he wants to go. Paul and Sophie are introduced to the JWW Valentine Express, a love philtre. Anyone who drinks some falls asleep for 20 minutes, and when they wake up, they fall permanently in love with the first person they see. Almost as dangerous as the Portable Door.

Kurt Lundqvist, a recurring character in Holt’s books, makes an appearance as an enchanted mouse, having stepped in a Consequence Trap as a former hero.

Book #2 In Your Dreams: Paul has been promoted to Clerk, and so he gets a company car. She is a Volkswagen Polo named Monica, who used to be a German sorceress caught spying for a competitor of JWWells.

JW is not evil like his nephew, but he is concerned about the bottom line. The Bank of the Dead gives him a good price point, so they are his banker. It is based on an old Chinese custom. To make a deposit, you put a deposit slip on your cash, and burn it.

Paul trains as a hero with Benny Shumway, the Dwarf who is the cashier and fills in at pest control as a retired hero.

The Contessa puts Sophie to sleep, but not in a good way.

Book #3 Earth, Air, Fire and Custard: There are four elements: Earth, Air, Fire and Water. The Professor invents the fifth element, custard, which helps in the development of Custardspace, which is at right angles to normal space. Paul and Sophie keep getting trapped in it.

Paul keeps dying, and Mr Dao, the Bank Manager at Bank of the Dead, is getting tired of seeing him.

Paul and Sophie are given a large severance package and move to New Zealand.

Book #4 You Don’t Have to be Evil to Work Here, But it Helps: A mysterious company has bought out JWWells and are driving Dennis Tanner nuts with requests for data. Some partners are gone, but Benny Shumway is still handling the books. Cas Suslowicz is still around, but JW has disappeared again. Kurt Lundqvist is in charge of the San Francisco office.

Connie Schwartz-Alberich from Mineral Rights and Cassie Clay are doing the heavy lifting. The new management has ugly JWW baseball caps for everyone to wear as part of the Team. Connie refuses and is fired. Everyone hates the Company Song.

Colin Hollinghead Sr.’s factory gets a new workforce. They have cloven hooves, and work for nothing. Colin Jr. is afraid his father has sold his soul to get them, but he shouldn’t worry about that. Cassie Clay typed up the contract, so she knows whose soul is on the line. There is also a tree growing through Colin’s living room.

Book # 5 The Better Mousetrap: Frank Carpenter is Paul and Sophie’s son, and he is an accomplished magician. Insurance companies lose billions of dollars paying for preventable accidents. Frank uses the portable door to go back in time to prevent those accidents, and in the process makes pot loads of money. He saves Emily from where she has fallen into Carrington’s Better Mousetrap. Oddly enough, Carrington’s are her employers, and they filed the claim.Tosser Carrington, inventor of the Mousetrap and Dennis Tanner’s old partner is dead, but his daughter Amelia breeds a dragon from slime, and briefly takes over at JWWells.

Frank pays a visit to Dennis Tanner at Tanner & Co, Chartered Magician. His shape shifting mother is still the beautiful receptionist. On Dennis’s timeline, only 3 years have passed, but Frank is 29 years old.
Frank falls in love with Emily, the ex-dragonslayer, who teaches cribbage to a dragon and beats him out of a bauxite mine. She gives it to Rosie Tanner for services rendered.

Book #6 May Contain Traces of Magic: The JWW NM66s are literally flying off the shelf. Of course, it IS the mating season. DW6, the powdered water, is still the best seller, but nobody knows what the customers use it for. Salesman Chris Popham’s SATNAV is helpful in more than driving instructions, even if you have the JWW Book of all Human Knowledge. He has a quota to meet on the Portable parking space invented by Professor Van Spee. When it is unfolded, it expands into a parking space big enough for a minibus, even over double yellow lines.

Book #7 Life, Liberty, and the Pursuit of Sausages: In which pigs are turned into humans and humans are turned into chickens, and places and things appear and disappear. Rick Wurmtoter is certainly dead, and Professor Van Spee may still be alive.

The Paul Carpenter Library of Magic Books burns to the ground.