A dishonest story about a cherry tree 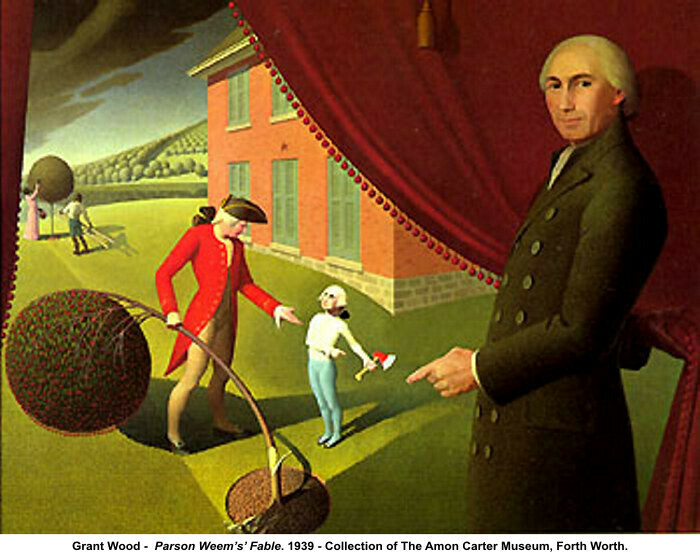 At least until my era of Dr. Seuss every American child heard the story of six-year old Georgie Washington using the axe his father gave him to chop down a cherry tree. When confronted by his father the future general, nation founder and president said “I cannot tell a lie” and confessed his sin.

The author of this fiction, Parson Weems, had his eye on good moral instruction for children and making a little money selling his homespun tale. Although writing history wasn’t part of the plan his tale became part of our national myth.

Today’s southern prize, the Republican party, prefers national myth over uncomfortable history. That’s ironic because the moral of the Cherry Tree tale is the importance of truth.

The all-important southern priority of protecting slavery was embedded into the Constitution when that otherwise sacred document was sullied by counting livestock as humans. Slaves were three-fifths human to be precise. Slaves thus boosted southern state’s power in the House of Representatives as well as giving the South presidential voting punch.

As an additional benefit sex with their livestock enriched slave owners when they sold their children for profit.

When the South’s slave population fell short of keeping up with the North’s population growth the South turned to a new idea – “Nullification.” Southern states declared that when the Congress passed laws that offended them southern state legislatures could simply ignore them.

When the South’s own Andrew Jackson scoffed at this claim the South turned their attention to the control of the United States Senate.

They lusted to add the hellish slave island Cuba to America without thought of the Spanish language (take note Puerto Rico). They wanted Texas carved into five states, giving them 10 not simply two more U.S. Senators. Then they attacked the Missouri Compromise of 1820, which made new western states north of the Mason-Dixon line free.

Finally, as now, they loaded the Supreme Court with their partisans to insure court decisions went their way under Chief Justice Taney. That 10-member court (with one more justice on it than today’s Robert’s court – hint, hint) did not disappoint. Taney’s court ruled in Dred Scot vs. Sandford that no northern state could prevent slave owners from bringing slaves into the North.

This effectively nullified the Missouri Compromise. This decision helped elect Abraham Lincoln, which led South Carolina to secede and fire on Ft. Sumter.

Today’s Southern Democrats have pulled of the greatest wolf-in-sheep’s clothing caper ever by taking over the party of the hated Lincoln. With that control they have created a new Taney Court.

Now the party that snuffed out state’s rights with the Civil War is racing state by state to take advantage of 6-3 majority on the Supreme Court. Twenty-nine states are poised to make abortion illegal; 19 are trying to cripple black voting. Many more are trying to make teaching honest history illegal in public schools while monitoring teachers with video cameras to make sure they are politically correct.

In Texas it’s personal. Its legislature has been working for decades to undo the legacy of their infamous Lone Star traitor, Lyndon Johnson. As President he shocked his southern allies by getting civil rights and voting rights bills passed despite the South’s invention of the filibuster.

What Republican efforts are trying to preserve is illustrated by the Googleable 12-minute This American Life story, “Past Imperfect” by Azie Dungey. Ms. Dungey, an African American, describes her job working at Mount Vernon National Park, playing the part of a slave owned by our first President. One day an elderly white visitor asked her what she was doing. When Ms. Dungey explained to the women how slaves like her kept the plantation working the visitor became irate and spat out, George Washington didn’t own slaves!

This is just what the January Sixth crowd wants – Americans divorced from their own history. And by the way – there was no holocaust; the Turks didn’t massacre the Armenians and the Japanese didn’t commit the Rape of Nanking.

African slaves were lucky. We made them Christians.

So let us reconsider the real George Washington.

Washington was born into a society where slavery was uncontroversial and even Biblically justified.

The young Washington set rigorously high standards for himself. He drew up a famous list of honorable attributes he intended to live by. Every free man who worked with Washington throughout his life judged him to be just such a man.

He set the standard that all American presidents followed until Franklin Roosevelt by limiting himself to two elective terms of office. More importantly, after the Revolution when the struggling Congress failed to pay the army, Washington dissuaded his furious junior officers from overthrowing the legislature. (Do you hear that Mr. Trump?)

The most compelling proof of Washington’s decency was his setting his slaves free in his will. Thomas Jefferson, the young idealist who proclaimed that under God all men are created equal, kept his slaves. Furthermore, Jefferson impregnated his wife’s half-sister, who also happened to be his wife’s slave.

Washington knew posterity would be watching and thus felt honor-bound to hold steadfast to America’s promise in the words of our Declaration of Independence.

At best, today’s Republicans are Jeffersonians. At best.