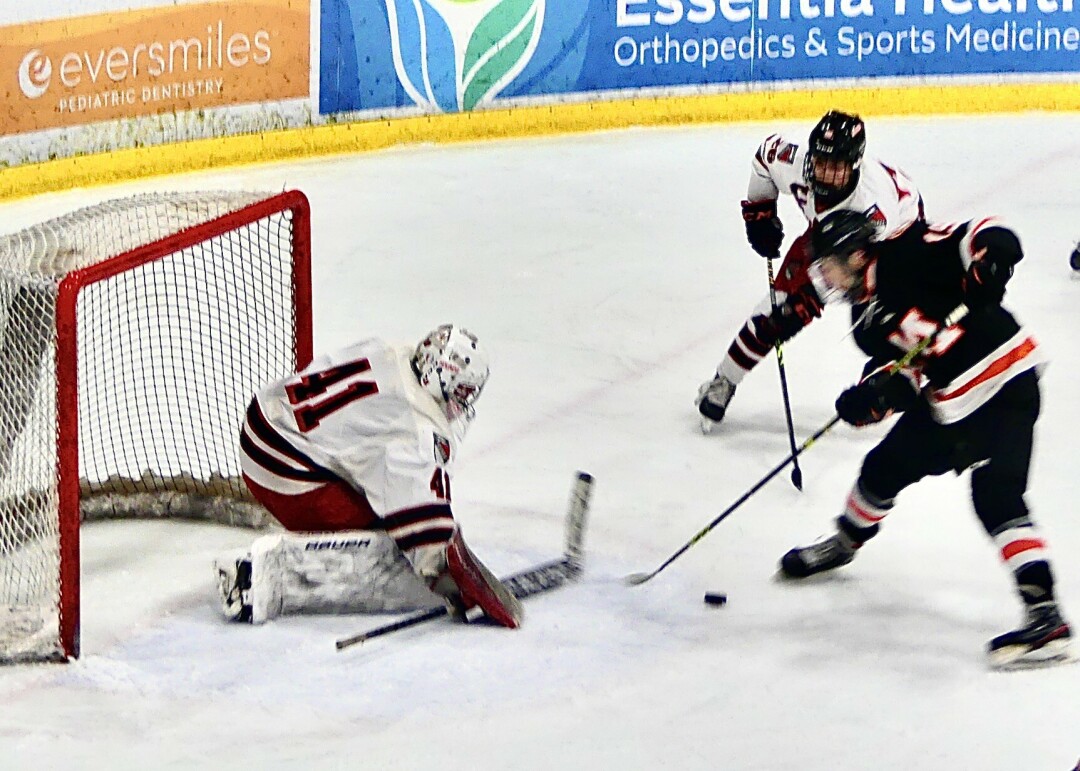 East goalie Zander Ziemske blocked the rebound try of Moorhead’s Harper Bentz amid his 44 saves, forcing Moorhead to work overtime to escape with a 3-2 victory. (Photo by John Gilbert)

Hockey Day in Minnesota was a rousing success down at Mankato last Saturday, although it was a curiously indecisive day for hockey fans Up North as both the UMD men and women absorbed painful losses for splits of their respective league series.

Of course, both the Bulldog men and women were playing on the road and both won on Friday to set up the chance for significant steps upward.

The NFL playoffs, incidentally, featured four of most dramatic, last-play finishes imaginable, setting up this weekend’s conference championship games, with Cincinnati at Kansas City in a 2 pm AFC final, followed by the San Francisco 49ers at the Los Angeles Rams at 5:30 to decide the NFC entry.

After all four of those UMD teams were on the road last weekend, all four are at home this weekend, playing in direct conflict with each other with the women’s basketball and hockey teams in the afternoon, followed by the men’s teams in both sports.

While UMD was swapping a 5-1 victory for a 5-1 loss in Omaha last weekend, Western Michigan was beating North Dakota 4-1 and 2-0 for a startling sweep that knocked the Fighting Hawks out of first place. Denver swept Colorado College 5-0 and 4-0 to climb into first place at 9-3, just ahead of Western Michigan and North Dakota, which are tied for second at 8-4. UMD is fourth, at 6-4-2, and St. Cloud State is fifth but has played fewer games, although last weekend’s 11-1 and 8-0 sweep of Miami shows their potential.

Duluth will be the scene of Hockey Weekend Minnesota this weekend, mainly because UMD will engage Western Michigan in a pair of 7 pm games at AMSOIL Arena that could ultimately help determine the NCHC championship. The other highlight series has St. Cloud State at North Dakota.

After facing Western Michigan this weekend, the Bulldogs go to Denver for a series, then come home to take on North Dakota, and for good measure they are inserting a pair of Tuesday makeup games at St. Cloud State. How’s that for a schedule?

The WCHA has a mad scramble of its own. Going into last weekend, Wisconsin, Ohio State and Minnesota were all tied with 40 points, UMD was fourth with 30, and MSU-Mankato was fifth with 20 points.

The UMD women stole a 1-0 victory at Ohio State last Friday, scoring with 32 seconds left, and then watching the Buckeyes shoot one into the UMD goal at the horn. Further review, as they say, showed the clock had not reached 0:00 when the OSU player shot the puck, but it had reached 0:00 before the puck crossed the goal line – a millisecond that knocked Ohio State out of its WCHA lead.

Meanwhile, Minnesota was winning 2-1 at Wisconsin, leaving the Gophers in first place, overnight.
On Saturday, Ohio State whipped UMD 3-1 for a split, but in the other big series, the Gophers beat

And it is Mankato that will face UMD at 3 pm Friday and Saturday at AMSOIL Arena, having split two games early in the season with the Bulldogs.

On the high school scene, Duluth East has been written off by pretty much everybody, but the Greyhounds have shown signs of more than resilience. The Greyhounds and new coach Steve Pitoscia opened the season with eight losses in a row – unprecedented in the program’s history. But since then, they have gone 3-3-1.

One of the big reasons is junior goaltender Zander Ziemski, who has weathered some heavy shot assaults and kept the Hounds in several games.

Last Saturday, Moorhead jumped all over East. The Spuds had beaten Grand Rapids 5-4 on Friday, with Gavin Lindberg scoring twice in the game, and completing his hat trick with the overtime winner, but while they shot the puck as if they owned it, despite heavily outshooting East, Moorhead led only 2-0 at the second intermission, with a shot edge of 33-13.

While Ziemski held the fort, and Henry Murray scored for the Hounds at 9:41 of the third, and while the Thunderhawks may have slipped into containment, it didn’t work, as Noah Teng scored in a scramble at the crease with Ziemski pulled and 2:23 left.

Suddenly 2-2, the teams battled through 3:40 of sudden-death overtime before Moorhead found the winner – scored by Gavin Lindbergh, the same junior winger who had beaten Grand Rapids the night before in OT.

East came right back on Monday night and, with Ziemski again shining, the Hounds beat Cloquet-Esko-Carlton 4-1 at Heritage.

And in the NFL – Before last Sunday’s Buffalo at Kansas City AFC semifinal, several of my friends from around the country all happened to post items on Facebook that raved about how great it was that all three games played for the weekend all went down to the final seconds, when Cincinnati beat Tennessee – the top AFC seed – 19-16 as rookie Evan McPherson calmly kicked a 52-yard field goal with 0:04 remaining. The clock hit 0:00 as the ball split the uprights.

Then in the sub-freezing evening at Green Bay, it was the Packers who froze up, allowing a blocked punt to turn into a San Francisco touchdown by Talanoa Hufanga with 4:50 remaining in the fourth quarter, lifting the 49ers to a 10-10 tie. After Aaron Rodgers couldn’t generate even a first down, Jimmy Garoppolo – who had never played a game with the temperature below 40 degrees – came up with  a stirring drive that finished when Robbie Gould connected on a 45-yard field goal with 0:04 left, and as the ball split the uprights, the clock hit 0:00.

On Sunday, the Los Angeles Rams sent Matthew Stafford out to duel Tom Brady, and Stafford was brilliant, leading the Rams to a 20-3 halftime lead, which stretched to 27-3 in the third quarter. Brady got untracked, and performed his patented magic, leading the Buccaneers back with 24 straight points, gaining a 27-27 tie that had the Tampa fans in a frenzy, and Stafford with visions of deja vu from all the misfortune he had absorbed at Detroit. But the long-awaited turnabout for Brady came when he left 46 seconds on the clock.

Stafford, with surgical precision, brought the Rams through a dramatic drive, sparked by 20- and 44-yard bullets to Cooper Kupp to reach the Tampa Bay 30. Kupp couldn’t have been a surprise target, because Stafford had earlier hit him for a 70-yard touchdown to make it 17-3, Rams.

Stafford had time to make sure all was aligned, then went to the bench to watch Matt Gay drill a 30-yard field goal with the day’s standard 0:04 showing. The kick was just long enough to use up those final 4 seconds, and last year’s Super Bowl champion Buccaneers were through.

That left a game that went beyond all the thrills of the weekend’s earlier three games, with both Buffalo and Kansas City trading haymakers. Josh Allen of the Bills was the equal of Pat Mahomes of the Chiefs all night, and both were so good their very good defenses couldn’t contain the other side’s quarterback.

The final two minutes told the whole story. The teams combined for 25 points and three lead changes in the final 2:00 of regulation. That was the point when Josh Allen connected with Gabriel Davis for a 27-yard touchdown pass, which, with a successful 2-point conversion pass to Stefon Diggs, tied the game.

Mahomes, always looking icily calm, came right back to hit Tyreek Hill for a 64-yard touchdown pass with 1:13 left, giving Kansas City a 33-29 lead. Too much time, once again, and Allen ran and passed the Bills into position, and climaxed the drive by hitting Davis for the fourth time with a touchdown pass, for a 36-33 Bills lead, and only 17 seconds left.

Amazingly, that, too, was too much time and Mahomes passed and ran the Chiefs to midfield, where Harrison Butker made a clutch 49-yard field goal as the final 0:03 ticked away. Overtime.

And here was the only flaw in the NFL scheme. Rules say that the coin-flip winner chooses, and when Allen called tails, it came up heads. Mahomes chose to receive, and as the Bills sagged back in extra cautious defense, Mahomes picked them apart. If a team scores a field goal on its first possession, the other team gets a chance with the ball, which is fair; if the team going first marches all the way for a touchdown, it wins — not good, not after all this. So when Mahomes found Travis Kelce for an 8-yard touchdown pass at the right sideline in the end zone, the game ended with Kansas city winning 42-36.

But now we’re down to the conference finals. Last week, I picked the Rams to beat Tampa Bay, and Cincinnati to beat Tennessee, while I also picked Green Bay to beat the 49ers and Buffalo to beat Kansas City.

So, 2-2 after a 3-1 Wild Card weekend. The Rams go home to face the 49ers for the NFC berth in the Super Bowl, and I’m picking the Rams. Kansas City stays home and will be a huge favorite over Cincinnati, but I’m picking the Bengals to win.