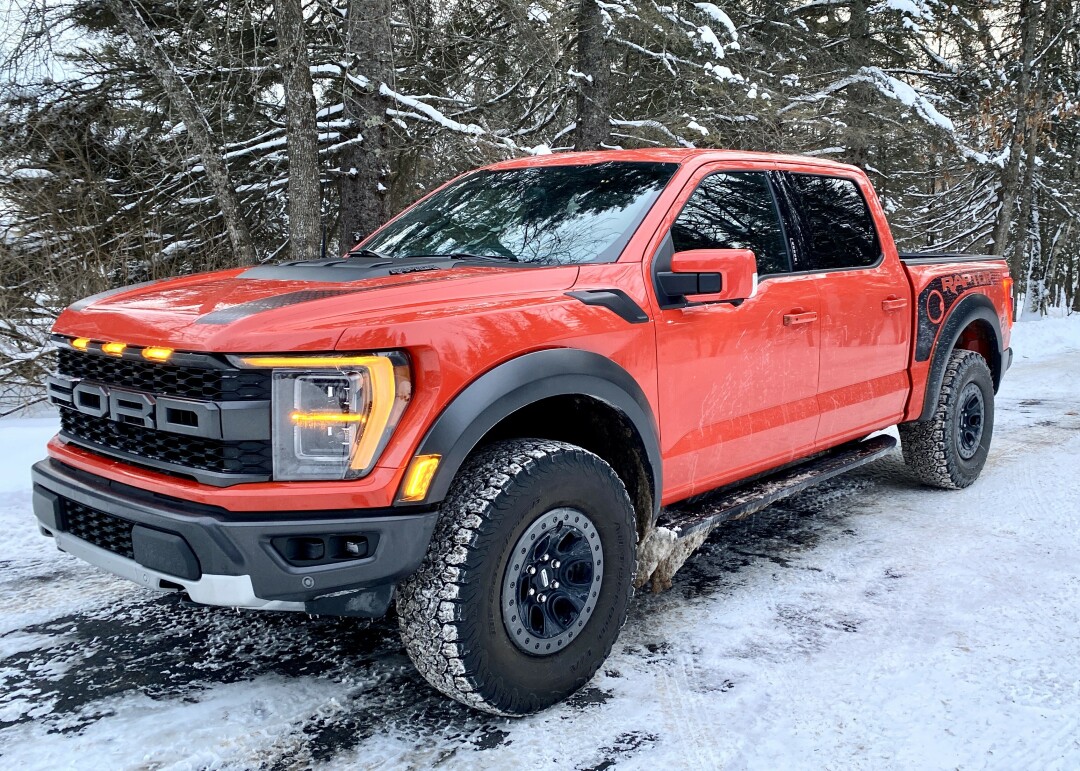 Ford’s Raptor gains capability with the 2021 version. Raptor is the perfect vehicle to take on Duluth blizzards. Photo by John Gilbert.

If you restrained me on a psychologist’s couch, I would probably admit to personal preferences of cars to trucks, and of blue color – any blue – rather than red or yellow – any red or yellow.

But there’s nothing that says I can’t change, or acquire new and different opinions. That most recently hit me right between the eyes when I climbed into a Code Orange Ford Raptor pickup.

It was an easy step up, out of 10 inches of fluffy white snow onto the fixed cast-aluminum running board, and then inside the very stark and very wide, interior of Ford’s hottest performance pickup.

Looking ahead out of my 100-yard driveway the and the ridge of snow left by the county plow guy, I pushed the right button and the 3.5-liter twin-turbocharged V6 roared to meaningful-sounding life.

Instantly, the image came to mind of the Raptor saying, “This? This is nothing!” as it snarled to life in the 10-below temperature. I gave it a minute while I checked out all the controls.

Then I pulled the shift lever into “D” and away we went, breaking our own new trail through the snow and whumping through the plow’s pile to get onto our rural highway.

It’s hard to believe the Raptor began life as a Ford F-150 before getting the Raptor treatment of a widened platform and all sorts of beefed-up, oversized suspension, exhaust, engine, transmission and other alterations to make it better suited to conquer the worst off-road conditions.

In Duluth, the definition of bad conditions needn’t be just off-roading fun, because it can also mean treacherous driving to and on roadways because of large snowfalls that seem to be particularly common this winter of 2021-22.

That’s why the revelation hit me. Yes, I like cars in most instances rather than the huge array of trucks and SUVs, but when you think about it, when five months of your year might face wintry threats, having a truck makes a lot more sense than for city-dwellers, who just “want” a truck.

And if you’re getting a truck, you might want the standard killer trucks for all purposes. And if that means you choose the Ford Raptor, then why not also get it in Code Orange, a bright, flashy paint scheme that is peppered with black decal styling items that indicate to all the world that your super truck is, indeed, a Raptor.

With specific running lights on the top edge of the big grille, with the huge letters “F-O-R-D” covering the full width, there’s no chance anybody will mistake what’s coming at them. Also, if somebody crashed into the Code Orange Raptor, they’d have to be trying to. There could be no accidental failure to see this beast approaching.

So many “locals” have big pickups that are justified by a tendency to tow a boat or snowmobile trailer up to the cabin, nobody questions the decision.

Among all the adjustments possible is a mode switch to set at Normal, Sport, Baja and Quiet.
If you suffer from an overdose of macho, going from sport to Baja focuses everything – including the exhaust – to declare your intentions, and if you have no macho tendencies, I guess could select normal, but I’m not sure that anybody worth the $78,545 sticker price would click it into Quiet.

It is interesting that Ford chose to build a new platform and arm the newest version of the Raptor with enormous off-road tires and a specially-designed Fox Shock absorber system to help showcase the new five-link coil rear suspension and long rear coil springs to all help getting the bolstered power delivery from an estimated 450 horsepower and 510 foot-pounds of torque to the ground, whether it be street or rocky terrain.

Part of the improvements at every part of the Raptor has to be the challenge from the Ram TRX, a new rival to Raptor’s domain. But what is most impressive about the Raptor’s obvious off-road capabilities are that they don’t turn the Raptor into a heavy-duty pogo-stick on rough streets.

We found the seats very comfortable and supportive, but driving over weather-battered streets and construction zones never caused any harshness or discomfort, and we would have to say the new Raptor is over-built for normal trips to Target or the grocery store.

Comfort, meanwhile, is everywhere for five occupants in the Super Crew 4x4 – the only version of the F-150 that can become a Raptor, and such features as a potent audio and a large information screen on the dash lead to the logical inclusion of all the connectivity and media features, as well as controls for the requisite camera views for parking and maneuvering aid.

For those who do work from their trucks, the Raptor has Ford’s trick console, with a flip-over lid that turns into a desk, and reveals a deep, cavernous bin for hanging files to organize your next construction job.

With all that, the Raptor is maneuverable and easy to handle, even in congestion where the wider body might seem a problem.

Rumors persist that Ford is already planning for increased challenges, starting with building a Raptor version of the Ranger, and next supplying the new Maverick compact truck with a Raptor model, as well as the new Bronco, which has a half-dozen than 10 different models, so why not a Bronco Raptor?

But the F-150 Raptor may be about to add a V8 just in case Ram or anybody else tries to outdo the current Raptor’s power.

Me? The 3.5-liter twin turbo V6 is more than adequate, and it works well with the 10-speed automatic, and all those trick suspension pieces that help lift the beast higher than its ground clearance can handle. That would be a lot, because it currently has 14 inches of front travel and 15 inches in the rear.

That’s plenty for conquering the biggest off-road challenge you might be able to locate.
And for sure, it makes a foot-deep snowfall or a two-foot snowplow ridge no challenge at all.