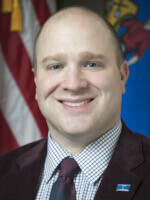 “It is our obligation as the state Legislature under our oath to the Constitution of the United States and oath to the state constitution to ensure equality before the law.” Wisconsin Rep. Shae Sortwell (R-Two Rivers)

Did I read this right? Is a Republican saying he believes in equality for everyone?

Has the GOP turned over a new leaf and decided to return the principles of party of Lincoln?

No, they have not. Rep. Sortwell was merely wrapping his proposal to weaken Wisconsin gun laws in the guise of constitutional principle. His statement is just more of the usual inaccurate, misleading spin Republicans use to sell their harmful, destructive agenda to an easily manipulated public.
“When fascism comes to America, it will be wrapped in the flag and carrying a cross.”

He was actually pandering to the gun nuts and arms industry by proposing legislation to lower the minimum age to legally carry a concealed weapon from 21 to 18. He was arguing that having a different age standard for carrying a concealed weapon than for voting or serving in the military was discriminatory.

Equality is now being hyped as an excuse to pack heat. We don’t need more Kyle Rittenhouse wannabes carrying concealed weapons. Perhaps the age of majority should be consistently applied. But given the Republicans’ long record of opposing equality in every other aspect of life, this is blatant hypocrisy.

Going back to the 1950s, Republicans have opposed every effort to create a more egalitarian society. Opposition to laws ending racial discrimination were only one example. Most Republicans also opposed equality for women, people with disabilities, and people with different sexual orientations. They opposed equal employment opportunity, equal pay laws, unions, and fair labor standards.

Republican cuts and opposition to social programs and taxes have produced massive economic disparities as the super rich got richer. So their concern for equality among gun owners is simply disingenuous.

Today, as I write this, every Republican in the U.S. Senate is refusing to support the John Lewis Voting Rights Act and the Freedom to Vote Act to protect people’s right to vote.

The Freedom to Vote Act creates nationwide, minimum standards for redistricting, election security, campaign finance and access to voting for every citizen. It would prohibit state laws allowing partisan officials or legislatures to throw out election results they did not like.

The John Lewis Voting Rights Advancement Act overrides the Supreme Court decision that gutted the voting rights act of 1964. It ensures access to the polls regardless of race, color or membership in language minority groups. In other words it ensures basic equality under the law.

In Wisconsin, Republicans are busy undermining fair elections with gerrymandering, various voter suppression schemes and unfounded “investigations” into nonexistent voter fraud. Anyone who thinks Republicans, as a party, care about equality under the law are ignorant of the documented facts of American history (which Republicans don’t want to be talked about in schools).

Requiring felons to complete probation or extended supervision after prison can add 10 years or more to their disenfranchisement. About 50,000 Wisconsinites live, work and pay taxes after serving their prison sentences but still cannot vote. An estimated 3.9 million U.S. citizens are disenfranchised, including one million who have fully completed their sentences.

Convicted felons are the only mentally competent adults not officially allowed to vote. This applies in 46 states and the District of Columbia to persons in prison. In addition the right to vote is further denied in 32 states to those on parole and in 29 states those on probation.

Fourteen states bar them for life (source: Human Right Watch). No other democratic country denies the right to vote to so many people for criminal convictions. Once again we are #1 in the world!

These shameful laws do no good for society but they do remove many minorities (and poor whites) from the voting rolls. These state laws are a legacy of Jim Crow.

Today it is well documented that minorities are disproportionately convicted, incarcerated and given harsher sentences than whites. Wisconsin incarcerates black men at the highest rate of any state in the nation.

Clearly these laws are going to impact minorities more heavily than whites, which explains why they still exist.

In 2018 Wisconsin Democrats introduced legislation to end felony disenfranchisement but it went nowhere in the Republican-controlled legislature.

In 2021 Republicans, including Rep. Shae Sortwell, introduced a bill to create more obstacles for ex-offenders voting and reintegrating into society. The proposal would force them to pay all fines, court costs, fees and restitution and complete any court-ordered community service before they could legally vote.

For practical purposes this amounts to a Jim Crow-era poll tax. Given that many felons have a difficult time finding employment, or employment with sufficient income to pay off fines, this obviously is a major barrier to voting. In many cases it may be a lifetime sentence to disenfranchisement.

Under Wisconsin law it is illegal to discriminate in employment based on criminal records unless the offense substantially relates to the job in question. But this law is routinely violated and enforcement is virtually nonexistent.

As we all know, enforcement of the law is very selective in America. There is no Republican outcry about the injustice and inequality of this situation.

Neither do Republicans speak out against the resurgence of racial, ethnic and religious hatred in our country. In fact they demonize the citizens who do speak out against police brutality and unjustified killings of people of color. Their response has been laws to criminalize peaceful protest. Rather than working to end mass shootings in schools, synagogues, and churches they offer only empty “thoughts and prayers” and more support for the gun nuts.

So when Rep. Sortwell pontificates about “equality under the law” the blatant hypocrisy is obvious. Wisconsin should be thankful that Gov. Evers has the veto power to prevent people like Rep. Sortwell from enacting their stupid, harmful, unjust legislative proposals.