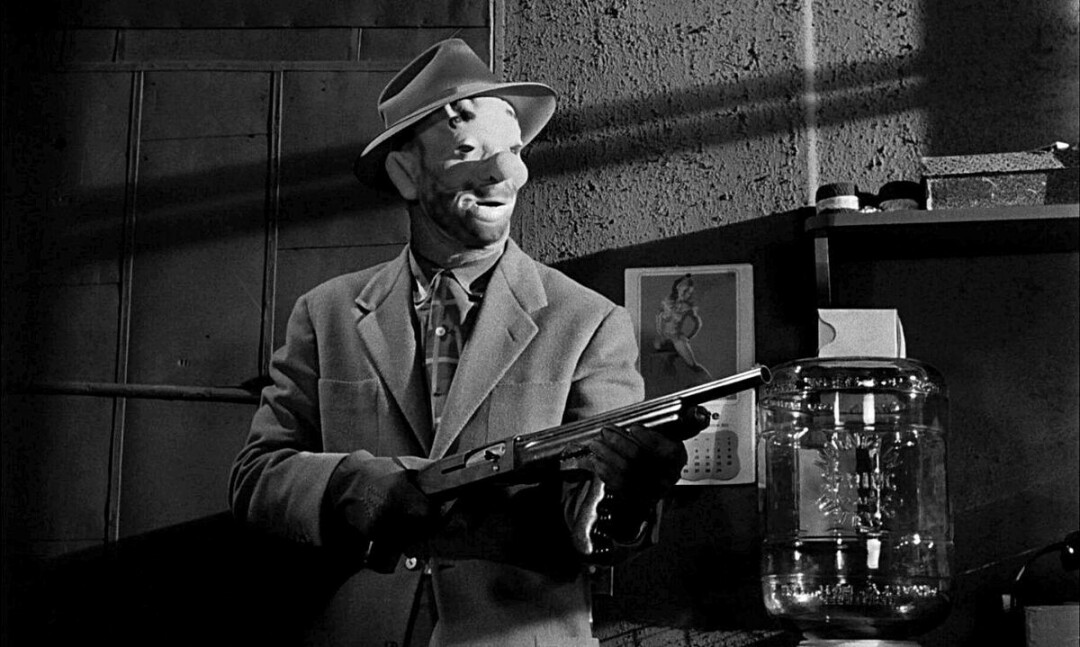 I originally started this piece on Stanley Kubrick’s 1956 The Killing this way:

And then I thought, maybe they first think of Dr. Strangelove, or How I learned to Stop Worrying and Love the Bomb.

Stan was The Man! But the one Kubrick film that I return to and reap something new from with each viewing is his 1956 The Killing. There are so many reasons to do so.

Second, the characters are deep. Twenty-eight-year-old Kubrick is excellent at telling us their stories through how they look, how they dress, how they live, how they react to situations. He shows us all of that to the point where they seem like very real people.

The Killing is presented documentary style, with a passionless voiceover sometimes telling us what is going on (provided by Art Gilmore, a veteran radio announcer).

For example: “It was exactly 4:23 when they dragged Maurice out.”

The movie opens with driving martial music, then switches to jazz for about the first third – the exposition part of the story. And then as the big heist begins to unfold, martial music returns. The music was composed and conducted by Kubrick’s childhood friend Gerald Fried, a Julliard-trained oboist.

Another big reason to enjoy this film – it may be Sterling Hayden’s best role.

Hayden, I think, was not comfortable as an actor. Sometimes he comes across wooden, detached, all bluster and no core. But here, you see the fire in his eyes. He is the character, Johnny Clay, on to a sure thing, if only he can align the right guys for the job. The crew turns out to be not so right, but that is the essence of film noir – nothing ever goes right. 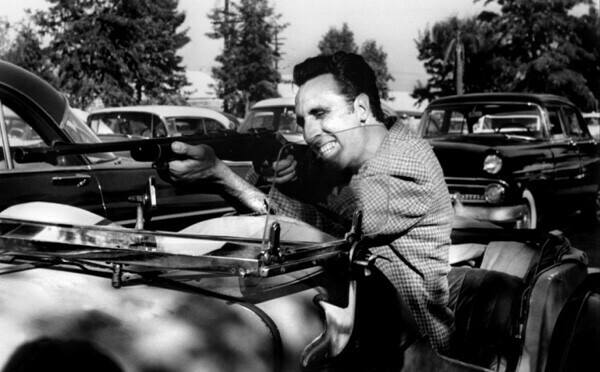 Timothy Carey had a penchant for twitches and showing his teeth that only accentuated his weirdness.

Another big reason to love this is the weirdo known as Timothy Carey, appearing here as Nikki Arcane, the horse assassin.

Carey is one of the true oddballs of American film, and I think Kubrick loved him for a while – he gave him the role of Private Maurice Ferol (what a name!) in his next film, Paths of Glory (1957). But he also had to fire him from the movie after he acted up to bring more attention to his character and then staged his own kidnapping to generate publicity. The movie was finished with a double standing in for Carey.

Carey was also widely known in the industry as a serial farter. In an interview late in his life, he was asked if he had any regrets and said he wished he would have been more open about his farting.

His role as Nikki Arcane is definitely one of his weirdest up until the Tim Carey written, produced and directed World’s Greatest Sinner in 1962 (with music by a young Frank Zappa), although his few brief scenes in Andre de Toth’s 1954 noir Crime Wave (also featuring Sterling Hayden as a brutally relentless but dumb cop) may be the creepiest scenes ever put to film. Again, he talks through his big, gritted teeth. You get the feeling as he has his few moments on screen that the other more traditional actors are thinking, “Who the hell is this weirdo?”

Carey doesn’t have a lot of screen time in The Killing, but what he does have is beautifully excruciating to watch as he fidgets, blinks, licks his lips and, in a very Carey fashion, shows his big wolfish teeth.

Carey’s character talks through clenched teeth. He’s been hired to shoot a horse during a race to cause a disturbance so Hayden’s crew can rob the racetrack proceeds. He does not look like an actor in a movie. He looks like a real assassin of horses or whatever else he is paid to kill.

There’s a great scene with Hayden fast-talking the heist scenario to Nikki, who stands there cuddling a puppy, licking his lips and rubbing his eyes. You can see he is seriously disturbed.

And one more reason to appreciate this film noir from Kubrick is that he got noir novelist Jim Thompson to write the script from Lionel White’s 1955 novel Clean Break. This would be Kubrick’s own clean break – his last film finished in the United States.

We wonder how this pair came to be, until Sherry explains that at some point George had promised her a life of wealth and ease, but instead they live in shabby rooms and Sherry steps out on him with the younger and more virile Val Cannon (Vince Edwards).

Wanting to impress his wife, George tells Sherry they are about to become wealthy through the racetrack heist. Sherry shares this information with Val, who has other plans for the loot George and his pals are about to steal. A bloodbath ensues (Tarantino said he was inspired by The Killing for his own movie about a heist gone wrong, Reservoir Dogs).

Without giving any more away, I will just say that Hayden’s character is the only survivor. As he and his girlfriend Fay (Colleen Gray) are about to catch a plane to Boston with a giant suitcase stuffed with cash, the suitcase busts open, bills fly everywhere and Sterling Hayden does his best piece of acting with the final line, a reaction to Fay, who says as they watch the bills tornadoing around the airport tarmac, “Darling, you’ve got to run.”

His response as two paincloths cops approach is that of a completely broken man: “Ah, what’s the difference?”

The Killing is available on Amazon Prime.