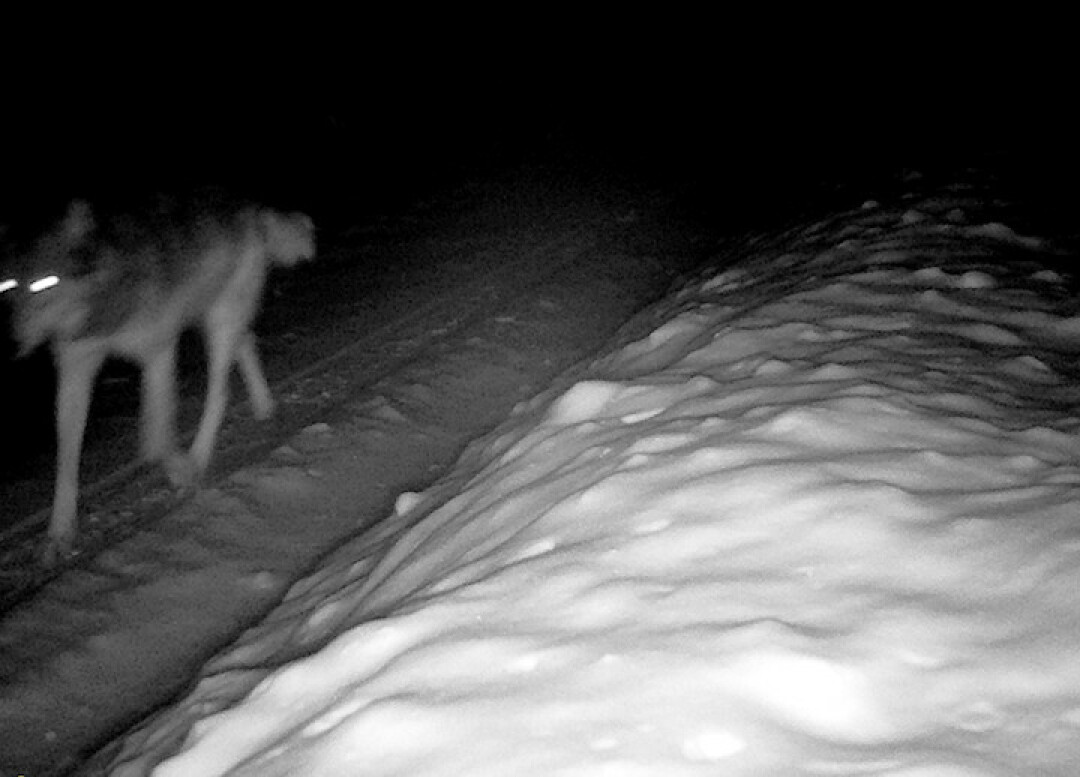 My trail camera captured this wolf as it walked out of my driveway after taking a nap in the woods. Photos by Emily Stone.

It’s not those feelings of comfort and familiarity I’m looking forward to, though. I’m eager to see which of my many wild neighbors have walked down my driveway!

An inch or two of snow on top of the last pass of the plow truck provided excellent tracking last weekend, and big tracks quilting the median had me bouncing in the driver’s seat.

After parking, I walked back to investigate. There, within a few dozen feet of the house, I spotted the first tracks. Four toes. Claws. Roughly the size of the palm of my hand.

Could it be? This would be a first for my yard…

The animal tracks disappeared under my wheel tracks, and then remerged – still within sight of the house. Four toes. Claws. Roughly four inches long.

I was forming a guess in my mind – a hopeful identification of my new neighbor. Do you have a guess yet?

Northern Wisconsin has hundreds of wolves. The DNR’s maps of wolf packs show a dense mosaic of territories. Neighbors to the east have had wolves on their trail cams.

I’ve seen tracks just two miles south of my house in the Chequamegon-Nicolet National Forest, and on all of the ski trails I frequent. But, ever since I moved in 11 years ago, the general wisdom was that the high density of homes, resorts and activity around Lake Namakagon was too busy for wolves.

Of course, in nature, saying “always” or “never” is a tricky business.

As I followed these tracks back out of my driveway, they wandered in and out of the wheel tracks and back and forth across the median. By the time they led me directly in front of my trail camera, my head was buzzing with excitement. 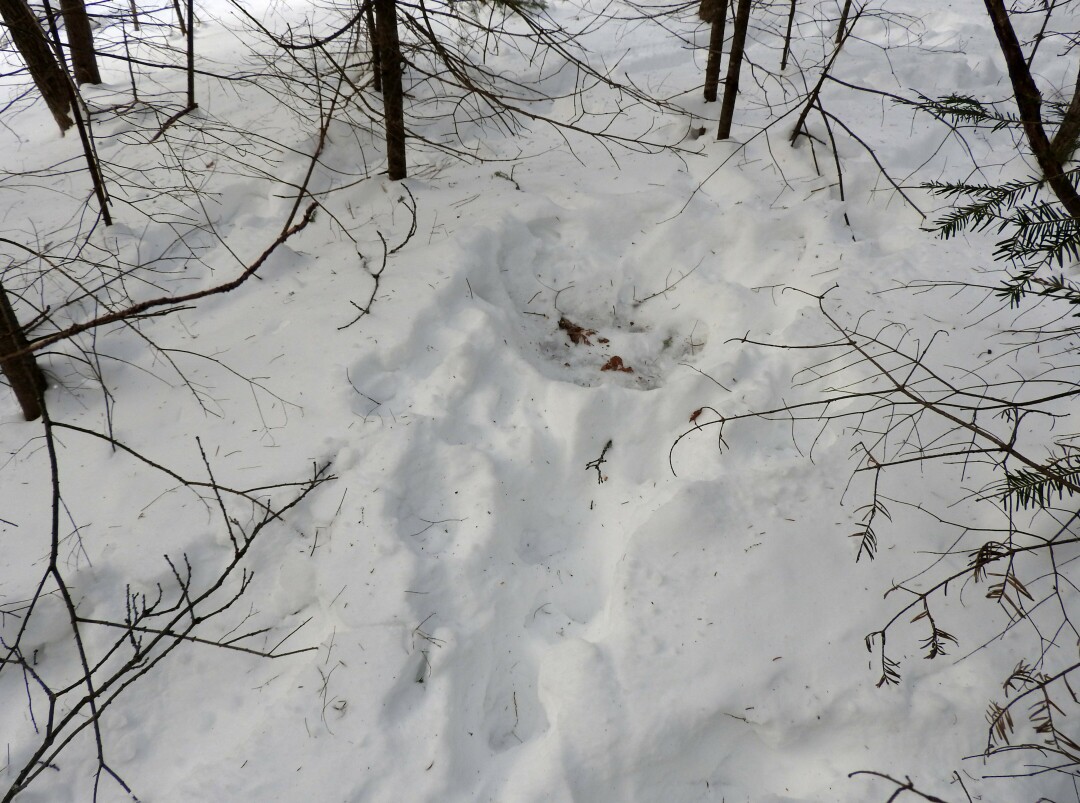 I was thrilled to find two icy wolf beds at the end of their tracks. Wolves simply curl up on top of the snow. They only spend time in a den when having pups.

Of course I grabbed the memory card. Shadowy figures appeared in the dark photos, looonng legs trotting and tail relaxed.

This semester I’ve been teaching 3rd graders how to identify a wolf and a coyote, and there was no question in my mind who this canine was!

At the end of my driveway I found the snowbank sprayed with yellow urine at about the height of my knee. Wildlife biologists and trackers call this an “RLU,” short for raised leg urination. This is a form of scent marking – the sign of a wolf claiming his territory.

Female wolves also scent mark, but are more likely to squat when they pee, and the mark appears lower down. There wasn’t a paired RLU here, though – no evidence of a female joining in.

What does that mean for the relationship status of these wolves?

Next, I went back to the place, just out of sight of the house, where the wolves had wallowed through the snowbank and into the forest. Strapping on snowshoes, I followed.

Over logs, under balsam thickets, and past a frozen wetland we traveled. Numerous trees had been sprayed with yellow. Wandering, dispersing wolves tend not to scent mark. If they are just exploring or passing through, there’s no reason to waste energy claiming space for their own or risking discovery by another wolf who is willing to defend their territory.

This many RLUs most likely means these wolves are planning to live here and want to deter any rivals from intruding. I might be seeing evidence of these new neighbors again!

Where did they come from, I wondered? Wolves have been known to travel more than 500 miles to find a new territory, but the density of wolf packs nearby suggest that a recently matured wolf may have simply budded off from his natal territory, found a quiet corner of the forest nearby, and befriended another loner for company, or in the hopes of being able to breed.

Finally, only a tenth of a mile from my house, under a balsam thicket, were two icy bowls in the snow.

The warm body of a wolf had rested in each, compressing and melting the snow. From the trail cam, I knew the wolves had passed through on a night when the temperature plunged. They might have sought this protected area, on the south side of a hill and under conifers, to take a five-hour nap in the bitter cold.

Tracks led into the beds and then back out, retracing their steps all the way back to my driveway. Where they went from there is anyone’s guess. I couldn’t pick up the trail again after they hit the road.
I’ll be watching for them, though. I’m hopeful that my woods are part of their territory now, and (like me) wolves seem to enjoy coming home. 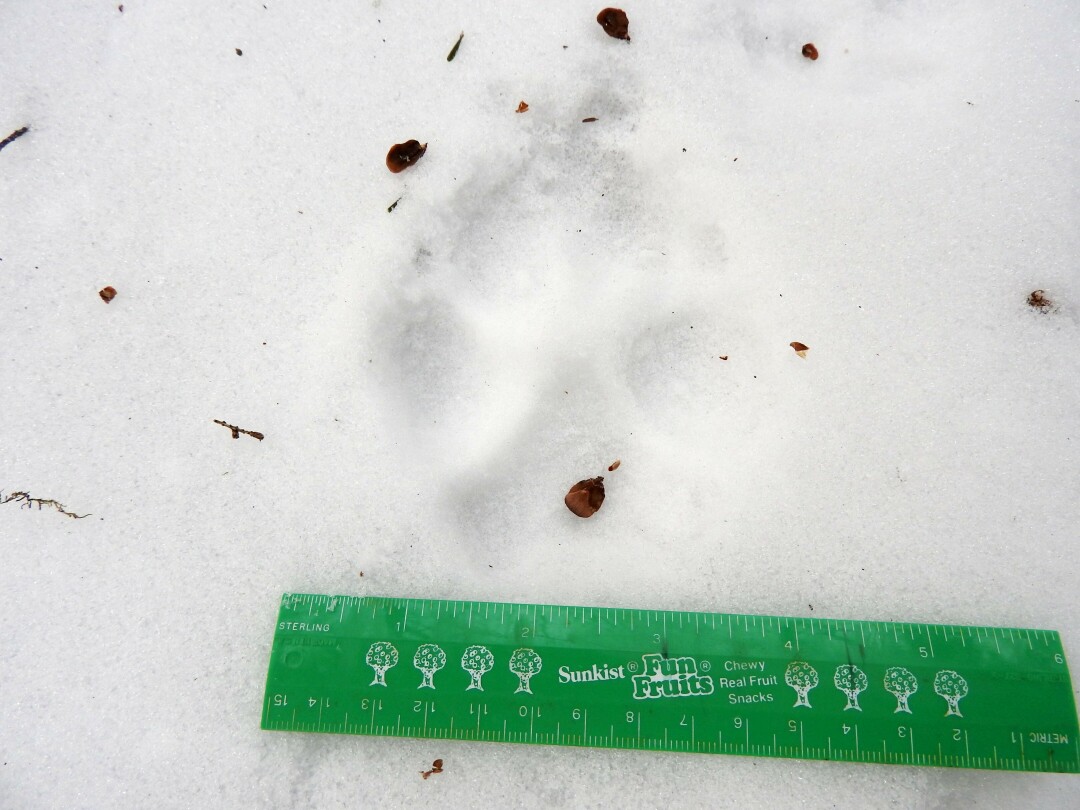 Wolf tracks are roughly 4 inches long and wide. Coyote tracks would be closer to 2.5 inches.

Emily Stone is the Naturalist/Education Director at the Cable Natural History Museum. Her award-winning second book, Natural Connections: Dreaming of an Elfin Skimmer, is available to purchase at cablemuseum.org/books and at your local independent bookstore, too. For more than 50 years, the Cable Natural History Museum has served to connect you to the Northwoods. Follow us on Facebook, Instagram, YouTube, and cablemuseum.org to see what we are up to.