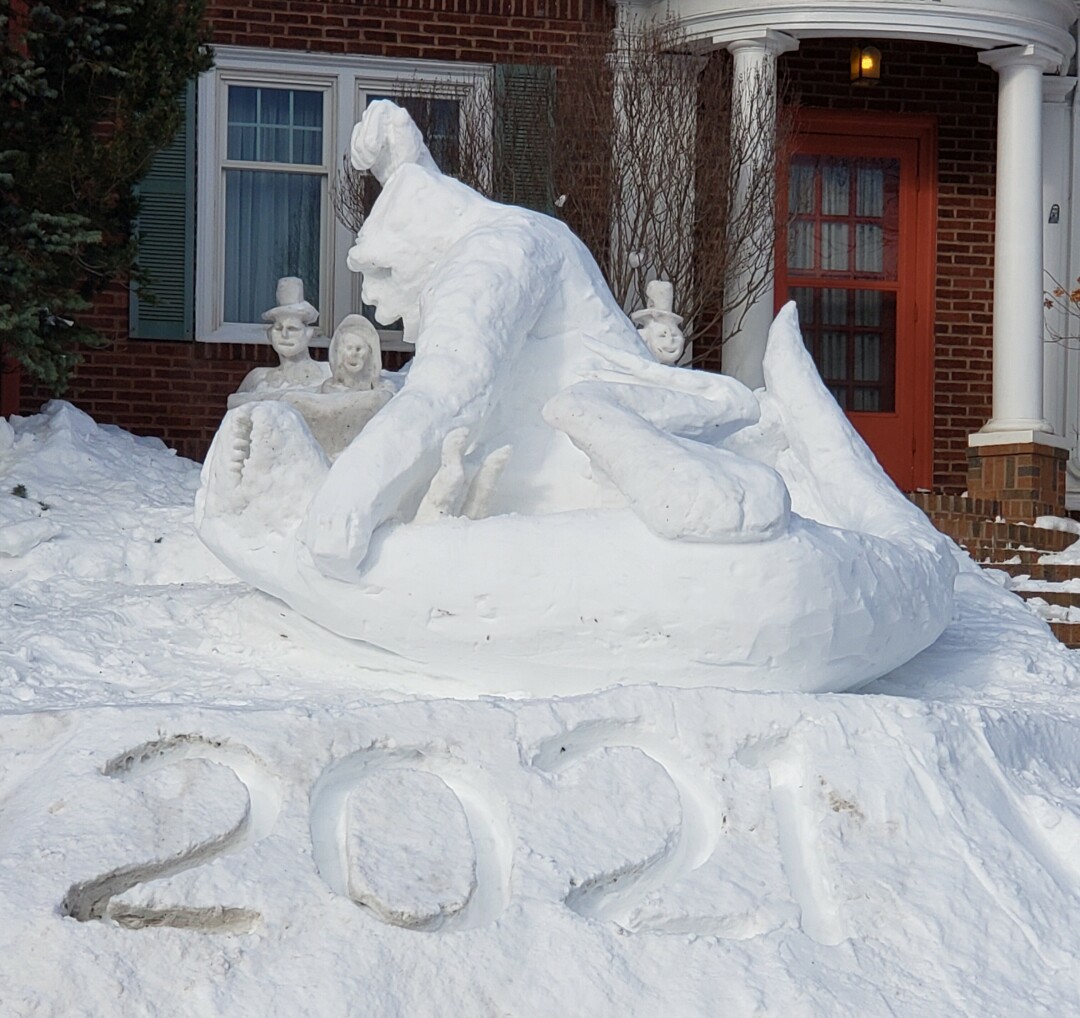 Last night as the delivery guy handed me my mashed potato pizza he looked over his shoulder at King Kong, who was about to pound a raised fist into a T Rex lying flat on its back. He told me I had outdone myself this year.

Snow sculpting has been my business for 35 years, not that there’s much money in it.

This winter season I’ve been busy. Before Christmas I fought rain and excessive heat to put a quintet of Dickensian Christmas carolers in my yard. As my singers turned ghoulish in the sun I decided my yard needed something to keep their spirits up. That something would also appeal to the teenage boy in me and I’ll confess; I kinda like the attention.

Five years ago my son sent me a link to a Reddit thread for Minnesota. Someone had posted a picture of my Jabba the Hutt and Reddit was inundated with ex-Duluthians grateful to see a reminder of their time in Duluth and grateful to read something other than news about a divided America.

I smiled to find a half-dozen pizza delivery drivers describing my wife and me as good tippers. Snow sculpting has put our house on the map.

I saw the possibilities for getting attention when my daughter first requested a snow dinosaur. 21st Avenue was averaging 21,000 drivers a day in 1987.

I had lost a couple elections already but I was sure I had another one in me. I wasn’t thinking about defeats. What I did not anticipate was that snow might prove to be as useful a form of communication as political cartooning.

One of my losses for the school board resulted in King Kong climbing old Central High and raising a fist in defiance. That was me the loser, but after I got elected I realized I needed more than snow to explain my votes on the school board.

Thus was born snowbizz.com. My logo included the King waving from old Central’s clock tower. I put pictures of my latest snow sculptures on the internet, but I also explained the goings-on of the school board.

I ended up losing a lot of elections but I never neglected my sculpting. I like my spectators especially the ones whose faces are pressed against school bus windows.

This year’s King Kong is the third gorilla to grace my yard but dinosaurs are more regular visitors, starting with my daughter’s request. I was embarrassed by that one. I called that tyrannosaurus “an iguana with a bad overbite.”

This year’s punching bag is my ninth dinosaur not counting Barney and Godzilla who made a joint appearance one year.

As enterprises go, snow sculpting is often more of a funny business. When my son was little he sat on my snow as I pushed piles of it from our backyard to the front. After I dumped it he’d hop back on the empty scoop for the ride back.

One night Duluth’s Lorenzo Music stopped by our house while I labored. His was the voice of Garfield the Cat. I’d first heard him hawking Schell’s beer in radio commercials when I was a student teacher in New Ulm. Smart ass Garfield the Cat was my son’s favorite cartoon.

I asked Lorenzo to call our home as Garfield and ask for Robb. My son was suspicious of the call so I introduced him to his favorite voiceover artist, who was hiding in another room.

Like Hitchcock or Stan Lee I have never been above putting myself in my art or benefiting from it. Most of my fans quickly forget most of my sculptures except for their favorites.

So, a few years ago I turned photos of my best sculptures into trading cards with their stats and my campaign platform. I handed them out door to door and offered the full set of 50 for campaign donations.

My sculptures have one other beneficial effect for me, an opinionated politician. It’s hard to stay angry with a snow sculptor.

Despite my occasionally incendiary columns I still get a lot of thumbs ups, honks and rolled-down windows for picture taking as I work. I’m well paid.

Readers of this space know I have more than a touch of the apocalyptic in my world view. This year’s sculpture honors Willis O’Brien’s 1933 blockbuster King Kong. That was the year Adolph Hitler became the Chancellor of Germany. Somehow King Kong was an apt metaphor for forces beyond our control even when it was us out of control.

That reminds me of yet another Kong. This one starred in Stanley Kubrick’s 1964 farce Dr. Strangelove. Its closing scenes have the future Darth Vader, James Earl Jones, navigating his Stratofortress to the heart of the Ruskies. But the last seconds belong to Slim Pickens. The cowboy pilot kicks open the bomb bay door, saddles up and rides to doomsday, yeehawing and waving his 10-gallon hat. His character’s name is Major Kong.