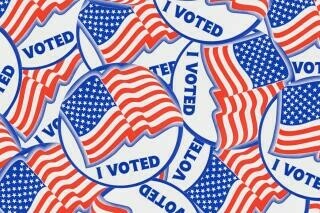 “Those who vote decide nothing. Those who count the votes decide everything.” - Joseph Stalin

“If you tell a lie big enough and keep repeating it, people will eventually come to believe it.” Joseph Goebbels, Third Reich Minister of Propaganda from 1933 to 1945.

It is abundantly clear that the Republican agenda, in Wisconsin and across the nation, is to rig future elections to gain complete political control. They are actively working to essentially establish one-party rule. They are actively working to weaken representative democracy by making elections meaningless political theater where opposition parties have no chance of winning enough races to actually gain control or be able to block the Republican agenda.

One-party rule is a characteristic of fascist governments. It is clear that Republicans are increasingly fascist in their political ideology. Their beliefs fit the definitions and characteristics of fascism. Their actions resemble the actions of fascist dictators of the past.

This is not to say that Republicans are all Nazis. But they definitely are not simply your grandfather’s conservative party.

This is not partisan rhetoric. The evidence that current Republicans are actively trying to undermine fair elections is abundant. Their actions speak louder than their words.

Republicans claim they are only trying to protect the integrity of elections by investigating “irregularities” that undermine public confidence in the electoral process. But it is Republicans, with their refusal to accept the election results, that are creating all the public doubts.

In Wisconsin and across the country, Republicans have sought to sabotage the electoral process by sowing doubt about the legitimacy of Joe Biden’s victory.

They are making unfounded claims about widespread voter fraud, and writing legislation that would make it harder for many people to vote. They are continuing to push the “big lie” despite there being no evidence of fraud.

Numerous recounts, investigations, and lawsuits have failed to find any fraud or to overturn any state election results.

Two investigations of the 2020 election in Wisconsin are especially significant. Both corroborate that the election results were accurate. One was conducted by the nonpartisan Legislative Audit Bureau and the second by the conservative advocacy organization Wisconsin Institute for Law and Liberty (WILL).

When a far right wing group like WILL concludes there was “no evidence of widespread voter fraud” the Republican demagoguery should end. But Republicans persist with the lies in the hope that “people will eventually come to believe it.”

Since the election there has been an avalanche of Republican-sponsored legislation intended to make it harder to vote and rig future elections in their favor. Most egregiously this includes efforts to allow partisan control of elections and even the ability for partisan officials to throw out valid election results.

Most alarming is this trend includes legislation to allow partisan office holders to interfere with election processes or even reject election results entirely.

Another disturbing trend is the proliferation of partisan-motivated reviews of election results.

Wisconsin is one of six “swing” states where this has been happening. Despite there being no evidence of any significant election fraud or an inaccurate vote count, Republican legislative leaders have pushed multiple efforts to discredit the results. Specifically:

All of these “investigations” have found nothing but did sustain the “big lie” and continue to undermine confidence in the election process. Clearly the intent was to justify more legislation to rig future elections.

In Wisconsin multiple bills have been introduced to implement this agenda. In February 2021, Wisconsin Republicans introduced 11 bills to make it harder to vote, use absentee ballots, restrict helping elderly and disabled people to vote, and to restrict the use of secure ballot drop boxes.

There is no evidence of fraud in any of these practices but suppressing the number of people voting is their goal. Six of these bills pass and are vetoed by Gov. Evers.

In November 2021, Rep. Timothy Ramthun introduced a resolution to “decertify” Wisconsin’s electoral votes legally cast on Jan. 6, 2021. In December he introduced a bill that would permit partisan elected officials to nullify an election result and require a new election within 30 days. He also introduced separate legislation to dissolve the Wisconsin Elections Commission and transfer the Commission’s duties to the Secretary of State.

This would place the administration of elections under a partisan elected official. The bill includes the authority to certify, or not certify, elections.

Republicans created the bipartisan Wisconsin Elections Commission in 2015 after they dismantled the non-partisan Government Accountability Board (because the GAB was investigating former Gov. Scott Walker’s campaign law violations). Again this shows a clear pattern of promoting partisan control of elections.

On top of these undemocratic proposals there is gerrymandering. Wisconsin Republicans beginning in 2011 locked in their control of the state legislature by manipulating district boundaries. They made the maps even worse in 2021. The highly partisan Wisconsin Supreme Court has ruled in favor maintaining these gerrymandered legislative districts.

Fraudulent elections are a charact-eristic of fascist governments and one of the ways dictators achieve and maintain political control. Who controls election procedures and who counts the votes makes all the difference.

The was no election fraud in 2020. But Republicans are busy laying the groundwork and building legal infrastructure to make fraud possible in the future.