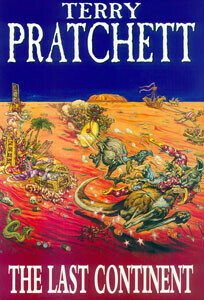 Any Austrophiles interested in obtaining a copy of this Pratchett novel?

There are two books called The Science of Discworld which are actually more about the science of our world, interspersed with an Unseen University story in which the wizards attempt to build a Roundworld universe.

Discworld is a relatively flat disk of a world which rides on the backs of four giant elephants, who in turn are standing on the back of a huge space turtle known as the Great A’Tuin, swimming through space, destination unknown.

Being flat, the great Rim Ocean forms a gigantic waterfall as it cascades down to the turtles back. Pratchett never explains how the water gets back up.

There is one large, unnamed continent on which the stories in most of the books take place. It is connected by an isthmus to the Counterweight Continent, which contains the Agatean Empire. The sentient pear trees grow there, which are the source for the wood which is used to build the traveling luggage.

Discworld’s sun is small, and circles the disc. Unlike our world, there are no directions except for Rimward or Hubward.

In the center of the disc are the Ramtops, a huge snow-covered mountain range, which contain Cori Celesti – the domain of the gods.

There are a lot of gods on Discworld, the rule being that the strength of the god is related to the number of followers. The strong gods like to sit around a table and gamble. A god whose followers are dying out might be reduced to begging for scraps.

On the extreme Rimward side is the Klatchian Seriphate, which is largely the Nef Desert. Klatch is mainly a destination, except in Jingo.

In that book, a lost island rises from the ocean, and Klatch becomes a rival of the largest city, Ankh-Morpork in claiming the territory.

Most of the books are centered around Ankh-Morpork. It is ruled by a benevolent dictator named Lord Ventinari.  We get a little view of his background story in Night Watch, which also is the first story involving Sam Vimes as a rookie patrolman serving under a charismatic leader.

It is possible to read the books on Sam Vimes in order, as he progresses from patrolman to Commander of the Watch, but it isn’t necessary. He is always the professional policeman, and some of those books read more like mysteries than fantasies.

At the end, he is also Duke of Ankh, since he is married to Lady Sybil Ramkin, the Duchess of Ankh. She is an environmentalist trying to save swamp dragons from extinction.

The city of Ankh-Morpork is the largest city on the disc. It is built along the river Ankh, which is so polluted that, if a boat motor dies, the passengers may be asked to get out and push.

It is also the home of Unseen University, where the wizards avoid working. The University Librarian was turned into an orangutan by a spell that went wrong, but he likes being in that form, as it makes it easier to reach the books on the higher shelves.

The City Watch is interesting as it gets diversified. They start with Dwarves, most of whom are interested in singing, drinking and fighting, not necessarily in that order. At the start, they do not admit to sex, as the female Dwarves have bushy beards and carry axes and so are hard to tell from the males.

One person who was raised as a dwarf is (eventually) Captain Carrot. He is 6’6” and as broad as he is tall, so he demands respect. He is also extremely honest, and a dedicated policeman.

Detritus, the troll, becomes the patrolman who is excellent at breaking down doors (and heads.) Sgt. Angua is a beautiful werewolf who is vegetarian in her human form, and only takes an occasional chicken as a canine. She always pays the owner for that.

By the end, the Watch has a vampire (reformed), a zombie and an Igor. I loved the Igors. It is not an individual, but an entire race of beings, all named Igor.

Igor speaks with a Boris Karloff lisp, and looks on the morgue as a source of spare parts. He is good with a needle and thread, and can operate on himself if need be. He has a dog named Thcrapth who has evidently been sewed up when needed, and also has two tails in case he loses one.

The first Pratchett book I read was Eric, which had Rincewind, the incompetent wizard and his traveling luggage.  A book I read later explained how he got the luggage, so by this measure, they were out of sequence. I enjoyed both books, anyway, and I thought I would enjoy any book which featured Rincewind.

The Last Continent has Rincewind and his luggage, and is as well written as any Pratchett book, but it is essentially describing Australia through Australian folklore and aboriginal dream stories. Not being familiar with that background, I got lost trying to wade through it.

Also, in a book-buying frenzy, I ended up with two copies of the book. I will give a copy to the first Australiophile that asks for it.

The other Pratchett book I was not fond of was The Wee, Free Men, which is about the little blue pixies. What turned me off this book was the heavy brogue he has the pixies speaking. Not being familiar with it, It was a little heavy going having to translate it into English. Not crazy about the story, either.

Uberwald is mentioned in several books. Somewhere it is implied that it is ruled by vampires, but when Sam Vimes is sent there on a diplomatic mission, he is forced to deal with Sgt. Angua’s family, and has to kill her vicious werewolf brother.

The other locale which is mentioned a lot is Lancre, Lancre is the home of the witches.

I read two of those books, which I did not find particularly interesting. The best book which featured the witches of Lancre was Masquerade.

I promised to look into the Tiffany Aching (the apprentice witch) story, which turned out to be similar to the other witch stories – that is, not very interesting, plus it also contained the pixies.

I enjoyed the books about surprisingly competent career criminals that Lord Ventinari puts in charge of the post office in Going Postal and the bank in Making Money.

DEATH rides a huge white horse named Binky. He cannot feel human emotions, but he likes to try. He at one point takes on an apprentice (Monk) and an adopted human daughter, He has one book to himself (Reaper Man), although he makes appearances in several books. He always SPEAKS IN CAPITAL LETTERS.