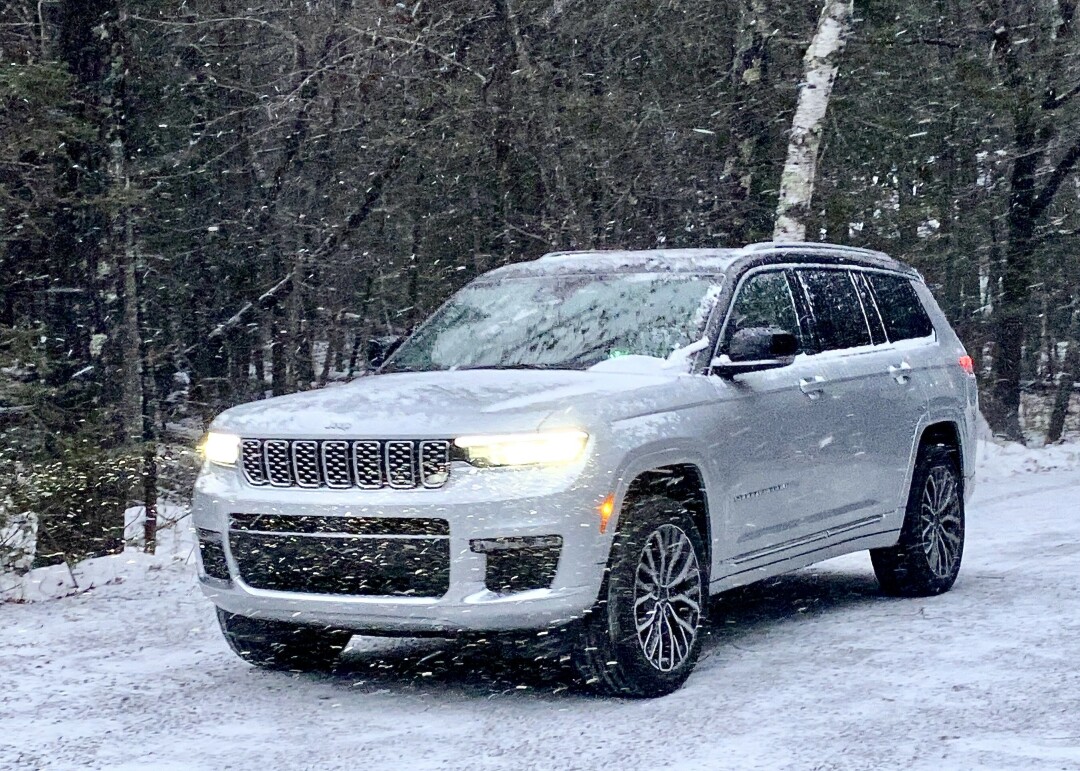 The new Grand Cherokee L was right at home in Duluth snowfall. Photos by John Gilbert.

Ever since Jeep decided to come out with the Cherokee and then Grand Cherokee, it’s been the most universally appreciated member of the Jeep family. The Wrangler is gray fun, the old Wagoneer was a whale, and then the niche-challenging others like the Patriot, Compass, Renegade and various others came along, but the Grand Cherokee was consistently there.

For 2022, the Grand Cherokee enters its fifth generation, and the new model has made a significant step upward.

Along with its normal model, the Grand Cherokee will get an “L” which stands for “Long.” As in, long enough to house a third-row seat.

Jeep has decided to add the Grand Wagoneer back into the 2022 mix as an expensive, high-end model with an interior that sets new standards for basic people haulers. But during this current 2021 model year, the Grand Cherokee made a significant upgrade which will carry it into 2022 in style.

Both share the same new grille, which modifies the familiar dominant seven vertical bars by filling them in with little metal bars to make it look slicker and blends better with the redone exterior sheet metal.

The real difference between the base 4-door and the L is not in the drivetrain, because both use the Pentastar 3.6-liter V6 with 295 horsepower and 260 foot-pounds of torque, running through an 8-speed automatic transmission. You also can choose the 5.7-liter V8, or the fire-breathing 6.2-liter Hemi with more than 700 horsepower.

During the week while we had the Grand Cherokee L, I did respond a couple of times to the urge of hard acceleration. Both my wife, Joan, and my older son, Jack, remarked about how the muscular sound of that big V8 is exhilarating, and I had to agree that it sounds like a Trans-Am racer from the 1970s.

Then I discovered that the quick, rich-sounding engine was indeed the 3.6 Pentastar V6, which is aging, but has dual overhead camshafts, four valves per cylinder, and variable valve-timing.

The 295 horsepower peak at 6,400 RPMs and the 260 foot-pounds of torque reach their peak at 4,000 revs. And the power is impressive enough that I would suggest anyone interested should try out the V6 before ordering the V8, because unless you’re pulling a house trailer, you might find the power is easily adequate.

Perhaps the only disappointment was that I only got about 16 or 17 miles per gallon around town, and never managed to get it up more than 20 mpg in my combined but mostly city driving. These days, with the onrushing array of hybrids and electric vehicles, sub-20-mpg may not cut it.

At a glance, you may not notice much difference between the outward appearance, but look closely and you will see that the L is extended aft of the rear doors. Not unbalanced, just extended, enough to house that quite useful third row seat.

It felt big, too, in city and shopping center parking, and the extra agility of the normal Grand Cherokee could be another good reason, besides the price, to choose it over the elongated L, which rose from a base price of $59,660 to an as-tested sticker of $67,090.

The L that I got to test was the loaded “Summit Reserve” version, with every luxury amenity Jeep could pack into it. The standard leather seats are Palermo leather, which are listed among options, too, as though it’s an upgrade. Seat surfaces have tiny pinholes to allow efficient cooling and heating.

Since I was test-driving it in Duluth, I used the heated seats a lot and never did click on the cooling function. Both have three levels.

The dashboard is trimmed in open-pore wood, and it is very classy. The front bucket seats not only are comfortable, heated and cooled, but offer an adjustable back massager that really works to add to the luxury.

Second-row buckets also are also heated and ventilated, and they fold down to allow easier access to the third row, which is a fold-down bench seat.

The audio system also is upgraded in the Summit Reserve, from very good up to stupendous., It is a McIntosh system, with 19 speakers instead of “only” 9, and a 950-watt amplifier.

If you step out of the vehicle and leave the door open, you are still impressed with the throbbing sounds escaping from the system.

As it turned out, the normal-sized Grand Cherokee was also silver, and with the same drivetrain it felt more agile and more easy to handle in traffic and parking. In fact, I really preferred the less-luxurious but classy dark leather in the Grand Cherokee.

Both vehicles have console switches to alter driving modes, with QuadraTrac four-wheel drive and Selec-Terrain, and air suspension assuring you that in any setting, you will glide comfortably over railroad tracks and whatever surprises your neighborhood streets will offer.

The full array of safety measures also aid the driver in staying in your lane, and properly warning you of objects ahead or behind when you’re parking.

I like the overhead view on the backup camera, which helps in all parking situations, and the night vision feature spots pedestrian and animals in the dark before you might notice them.

The Grand Cherokee always has been a solid, sturdy SUV, not too big but big enough. The new one might be considered too big by some, but then you can fall back to the normal Grand Cherokee and still get the versatility you want.