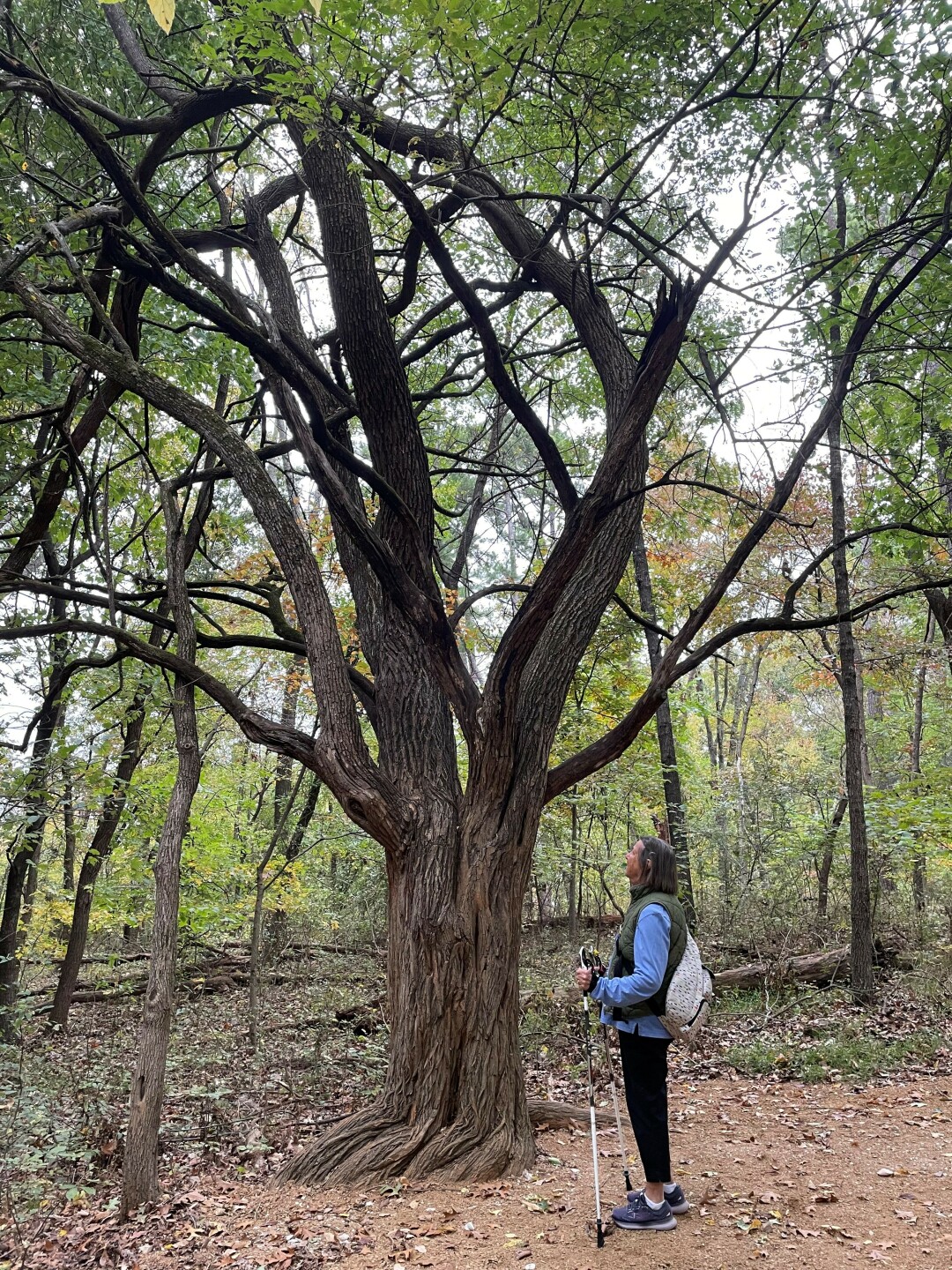 The author admires a tree during her visit to Bentonville, Ark., last October. Photo by N. Deegan.

The trees above were lush, with leaves in more shapes, sizes and greens than we find in a Wisconsin woods in October.

Rocky ditches and muddy gullies carried trickles of water, a reminder of how this ridged, deep-valleyed hill country was formed.

Raptors were using updrafts, soaring in the blue, but a bank of dark clouds was spreading across one section of sky. My rain jacket was at home.

I had been touched to be invited along on a daughter’s family vacation. After several years of self-sufficiency, I was pleased to take a back seat for the trip through five states.

My son-in-law brought two mountain bikes, to be used for different kinds of riding, apparently. This was a recreational mecca, after all.

We continued walking into the Razorback Regional Greenway and emerged onto a flat sidewalk centered with a yellow line. I stayed far to the right, hoping my failing ears would perceive the approaching whirr of tires and the “on your left” warnings.

Paths into the forest beckoned, but not for those without wheels and helmets.

Motion filled the woods. Riders leapt over hills, swerved around bermed corners, plunged down rock ramps and rollercoastered through bumps.

There was much to watch as we walked, but I stopped short when an orange-spotted spider appeared just in front of me, hanging by a long, long thread. Thick ivory legs, a round ball of a body, and those pretty orange circles helped me identify Araneus gemmoides, a cat-faced or jewel spider. This species occurs throughout the Western U.S., including the Midwest, but I’d never bumped into one before.

Funny, but I found myself identifying with that brave, dangling thing.

My longtime motto comes from Eleanor Roosevelt: “you must do the thing you think you cannot do.”

I agree to adventures and accept challenges. That’s how I ended up on this tangle of trails in Bentonville, Arkansas.

At home, I care for a cabin and much that surrounds it, haul logs, tend a wood stove and drive short and longer distances. I kayak, swim, hike, skate and ski alone.

The spider wove the thread that held her. I’ve woven one, too. Now we both cling to our independence.

When Jim became ill, our plans and dreams were cancelled. After his death, it seemed I’d been given another chance.

But I had learned that any type of misstep can change everything. I’m fragile and vulnerable, like that eight-legged dangler.

Abruptly, a passerby severed the long thread. The spider fell gently to the ground and scurried away. Her journey had been altered.

I expect the threads connecting me to cabin life will one day be severed. Will that happen when it is no longer safe for me to drive? Will the aches and pains of an aging body prevent me from completing required tasks? Will an accident interrupt this life permanently?

I know, for now, that I can trust myself, but I must trust others as well. My children are watchful, always aware of my capabilities. They will help me continue to live in my happy place for as long as possible.
When the thread of independence finally breaks, they will help me to move gently on to the next phase of my journey.

JoAnn Malek is a long-time Museum member and a recent participant in the Natural Connections Writing Workshop. JoAnn has graciously fine-tuned an essay that she drafted during that class. It touches on realities we all must face at some point – for ourselves and our loved ones--and I’m excited to share it with you this week. – Emily Stone