Why is Michelle Obama in my basement? 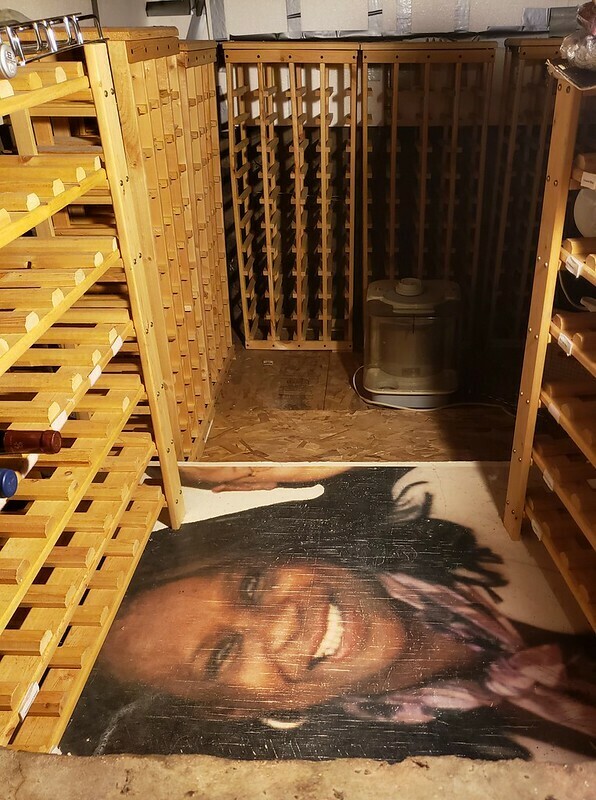 “Why is Michelle Obama in your basement?” That’s what my grandson asked me after he crawled back out of the dark, dingy space under our sunroom.

At the end of the millennium, when my wife and I became empty nesters, I turned this space into my wine cave. Although he didn’t remember it, when he was very little I would occasionally send him and his older brother in to fetch bottles for me.

For 72 years before we purchased the house the space was left unfinished. It still is filled with a dusty clay too dry for earthworms or anything else. The “floor” slopes steeply downward from the street side to the alley side four feet lower. Its only entrance is through a square hole left in the wall of our laundry room.

Getting in with my flashlight wasn’t easy. It required a step ladder. At my first peek all I saw was some debris that seemed to have been tossed in carelessly, perhaps by the masons who laid our home’s foundation.

My daughter (now mother of my grandson) has a vivid imagination. She always wondered what lay behind the makeshift wood blockade that sealed the unseen emptiness behind it.

For her 13th birthday party she begged us to let her friends crawl in to explore. I wrinkled my nose in disgust at the thought, but the party guests went in armed with flashlights. They came out with red clay dust under their nostrils. Their prize was a flattened cardboard box used for mailing California oranges.

Their eyes widened when they read to whom it had been mailed – Mrs. Charles Welty. That was our name!

In all the years we’d lived in Duluth only one other Welty had ever been listed in the phone directory and Michelle Welty, whoever she was, only lived in town for a couple years. Only the supernatural could explain this amazing coincidence. And now we learned, we were only our house’s second Weltys

When my kids graduated from Duluth East I found a use for this dusty dungeon. I began a competition with my brother about wine.

He had developed a love for wine after moving next to California’s Napa Valley. We both began to explore the sophisticated world of the oenophile.

I suggested cutting a doorway from the laundry room into the space under the sun room. My prudent wife said “no,” so I improvised.

I leveled the top of the slope and covered its clay with a 4 x 8 foot plank of plywood. It gave me a level surface for wine racks. Lots of wine racks.

I had painted a John McCain sign on this plywood for his Presidential run in 2000 and put it in my front yard. In 2003 my friend and former school board colleague Mary Cameron wanted a second go at it. She had lost her re-election bid two years earlier and I was her gung-ho campaign manager.

We ordered three lovely billboards of Mary surrounded by children. When an extra sign was printed I took its center section and put Mary’s smiling face over the McCain sign.

Mary took his place in my front yard. She went on to regain her seat, one she had lost two years earlier in part because of a nasty whisper campaign.

To top off her re-election to the school board, Mary was chosen to be the board’s new chair. I wrote a Reader column called simply, “Mary,” in January 2004. It was a post-campaign rebuttal to the whisper campaign. It can still be found on my old website. Just Google snowbizz.com, Diogenes, Mary.

Mary’s sign was the perfect size to place on my newly leveled wine cave. I enjoyed the thought of keeping Mary captive there. The two of us had enjoyed tippling reds after school board meetings.

make it easy to get into my elevated entrance I built a solid wooden ladder. I made a small hinged door for the entrance. It was made out of another sign I’d once put in my yard to complain about a huge pot hole in the street.

I always expected that Mary would come over some day so I could tease her about my cool floor. But the Red Plan intruded and we found ourselves on opposite sides. We’ve made up but she has never been over to see her smiling face.

But my grandson saw it. And its true. Pretty Mary Cameron who, because she was black, never had a single date in her three years at Duluth’s Central High School, does look a little like Michelle Obama.

Especially when she flashes her million-dollar-smile.

So, no I don’t have Michelle Obama in my basement. It’s my friend, Mary Cameron.