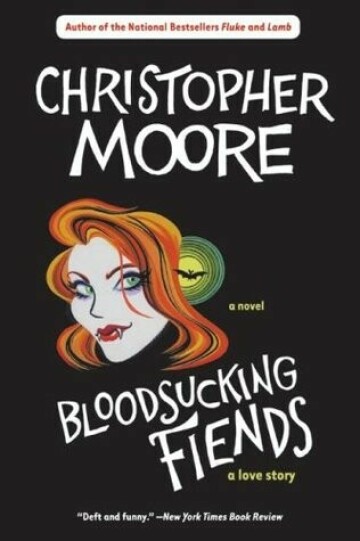 Christopher Moore wrote a few decent comic fantasies, but it is clear from his body of work that he prefers tragedies to comedies. In my opinion, he goes too far to achieve that in his vampire trilogy. In “Bloodsucking Fiends,” the girl is bitten by a vampire. He doesn’t drain her of blood, so as the standard vampire story goes, she wakes up an immortal vampire. In the second book, “Bite Me,” she bites her boyfriend and he wakes up a vampire. The third book, “You Suck,” he changes the rules by making his vampirism temporary and fatal.

This does accomplish Moore’s intention of splitting up the star-crossed lovers in a tragic ending, but it is less than satisfying as an ending. She is a vampire now, so the same rules should apply at the ending of the series as applies at the beginning. Maybe this should not bother me, but it does. In my mind, this is a logical inconsistency. An author can change the rules as he sees fit, but the rules should be the same throughout. Surely he could have found a way to split them up without that device.

Terry Pratchett’s vampires are able to resist dying from sunlight at the beginning of a book, and that doesn’t change—EVER. I rest my case.

Moore’s Shakespeare inspired works start with “Fool,” in which the lascivious jester first baby sits Cordelia, the youngest daughter of King Lear, then he has sex with her, and finally marries her. The humor in all three books is basically adolescent bathroom humor, so not particularly humorous to a grown-up.

The second book, “The Serpent of Venice,” is inspired by “Othello,” and the third book, “Shakespeare for Squirrels” takes a Shakespeare comedy, “A Midsummer’s Night Dream,” and makes a tragedy of it. An author’s prerogative, I guess.

“Coyote Blue” was an interesting book; “Lamb” was not particularly enjoyable to me, and “Fluke” was an absolute logical mess. “Noir” was set in 1947 San Francisco, and wasn’t a tragedy in that the lovers stayed together. Government agents were on the whole dense, and mindless killing machines. Too many coincidences in the plot lines and there is an alien who survived the crash at Roswell. They send him off cross country with a machine of his own design, which he can use to kill any living thing.

I am still trying to read “Sacre Bleu,” which is based on the lives of 19th Century painters. I am finding it a slog.

Spider Robinson, I am told, is well-known as a science fiction writer, winning Hugo and Nebula awards. He appeared on the scene after my science fiction reading days in the 70s and 80s, but I expect to try those books at some point.

He has written a whole series of books with Callahan in the title, and I have only read a short story collection and “Callahan’s Key.” These books, concerning telepathy, teleportation, and time travel, are clearly in the fantasy field. If you think puns are funny, then the comic fantasy label applies, if not, then groan loudly, because the puns come fast and furiously.

The book is also a tour of the East coast from Long Island to Key West, Florida, describing some of the tourist sites along the way, including a shuttle launch.

He is rhapsodic about Key West in the 1990s. There is much to love about Key West, but I know I would not fall in love with the heat, humidity, and cockroaches, not to mention the mosquitoes which are present in every season. I knew a couple who moved there about that time. Nothing has been heard from them since, so they are either having fun or they have drowned.

Robert Asprin is another author of comic fantasies who loves puns, but he only employs them in the titles of two series of books, the MYTH series and the PHULE series. I have read only one of the PHULE books, called “Phule me Twice;” I am debating whether I want to read another or not. Phule is a fabulously wealthy man who oddly enough is also a popular captain in the Space Legion. Popular with his men, that is—he is thoroughly despised by his superior, General Blitzkreig. Asprin obviously had some experience with military leaders—not all good.

There are six books in the series, all employing Phule’s name in a pun, such as Phule’s Paradise and Phule’s Errand. The books are supposedly written by Phule’s butler, who accompanies him in his escapades. I am hesitating to buy another book, thinking that they are probably just variations on the theme.

I bought the first book of the MYTH series—“Another Fine MYTH—“ back in my science fiction reading days circa 1980, so I had it on my shelves. It is a pun referencing a line often used by Oliver Hardy in old Laurel and Hardy films. This book introduces Aahz, a demon magician, and his apprentice, Skeeve. Aahz knows all the spells, but a spell put on him makes it impossible for him to practice magic, leaving it up to Skeeve to cast the spells he has learned, which isn’t much.

The second book I picked up was “MYTH-ion Improbable which picks up the story later. Skeeve knows a few more spells, but now Aahz is not a demon in the traditional sense—he is now a member of a race called Prevects (commonly misidentified as Perverts) and demon is a name used to describe any being who is a dimension traveller. This term makes absolutely no sense to me, and is an irritation, like a rock in your shoe.

Later books in the series are co-written by Jodi Lynn Nye, and, since Asprin died in 2008, the last two books—MYTH-Quoted and MYTH-Fits— were written entirely by her. His biography says he died of a massive heart attack while reading a Terry Pratchett book, but it doesn’t say which one.
I will probably read one or two more of the MYTH series, as they become available. I am assuming that Skeeve gets progressively better at his job.