What a way to start a New Year! 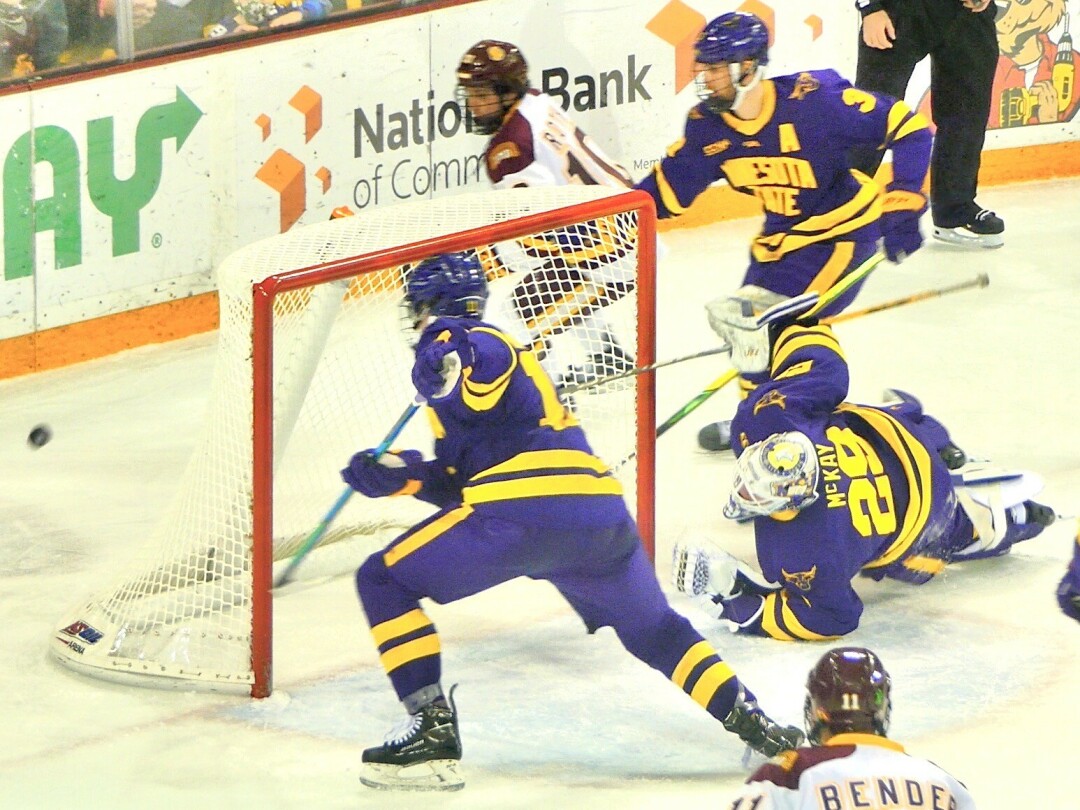 Minnesota State Mankato goaltender Dryden McKay needed only rare big saves to blank the Bulldogs 3-0, but he turned acrobat to deflect this UMD shot over the net. Photos by John Gilbert.

Northern Minnesota fans had good reason to anticipate an outstanding hockey game when the UMD Bulldogs played their first game at home in a month, against Minnesota State Mankato, which has risen to become a major rival for the Bulldogs ever since being left behind by UMD and the rest of the teams that fled the WCHA to start their own elite league, the NCHC.

MSU Mankato has risen to dominate what was left of the WCHA, and they now have followed a similar elitist path to start a new league, which they are calling the CCHA.

The Mavericks, which got a taste of reaching the NCAA Frozen Four last season, are hungry for more, and facing UMD was a major focal point.

It was a split series, with the teams playing in Mankato last Thursday, and the Mavericks prevailed when Cade Borchardt scored at 2:38 of sudden-death overtime for a 2-1 verdict.

The teams then had a day off Friday before finishing the series Saturday night at AMSOIL Arena. The loss wasn’t deadly for UMD, because after all, MSU Mankato was ranked No. 1 in the country.

I figured since UMD had been off for a month, that game would get the juices flowing again, and revenge would be a springboard into the second half of the season, if the Bulldogs could regain their form.

But the Mavericks have a goaltender named Dryden McKay who came back for the extra year allowed by the Covid-19 shutdowns of last season. But McKay and the Mavericks affirmed their No. 1 positions, as team and goalie, by frustrating the Bulldogs 3-0 in Saturday night’s game.

It was an interesting chess match between UMD coach Scott Sandelin and Mankato’s coach Mike Hastings, but McKay didn’t even have to play that well to win the game.

UMD was outshot 9-3 in the first period, and playing their first game at home in a month, they got outshot 8-6 in the second, as well.

The Mavericks got goals from Jake Livingston, I presume, and Borchardt to take a 2-0 lead. Not only that, they pushed the Bulldogs around and took the game over physically.

In the third period, Ryan Sandelin – Scott’s son – scored into an empty net for the 3-0 finish.

“I thought the first period was one of our worst periods of the season,” Scott Sandelin said. “They’re a good team, and we didn’t play our best. We never got going, and a lot of that was because of how they played. They remind me of some of our teams from previous years – they don’t let you play the way you’d like.”

The UMD press box crew, passing the buck to say some “selected members of the media” voted McKay as the player of the game.

Actually, I’m not sure who was selected, but I do know that McKay could have gotten that shutout sitting in a rocking chair. It was difficult to recall any of his 23 saves as being stellar, because his teammates prevented the Bulldogs from generating anything resembling a scoring threat. 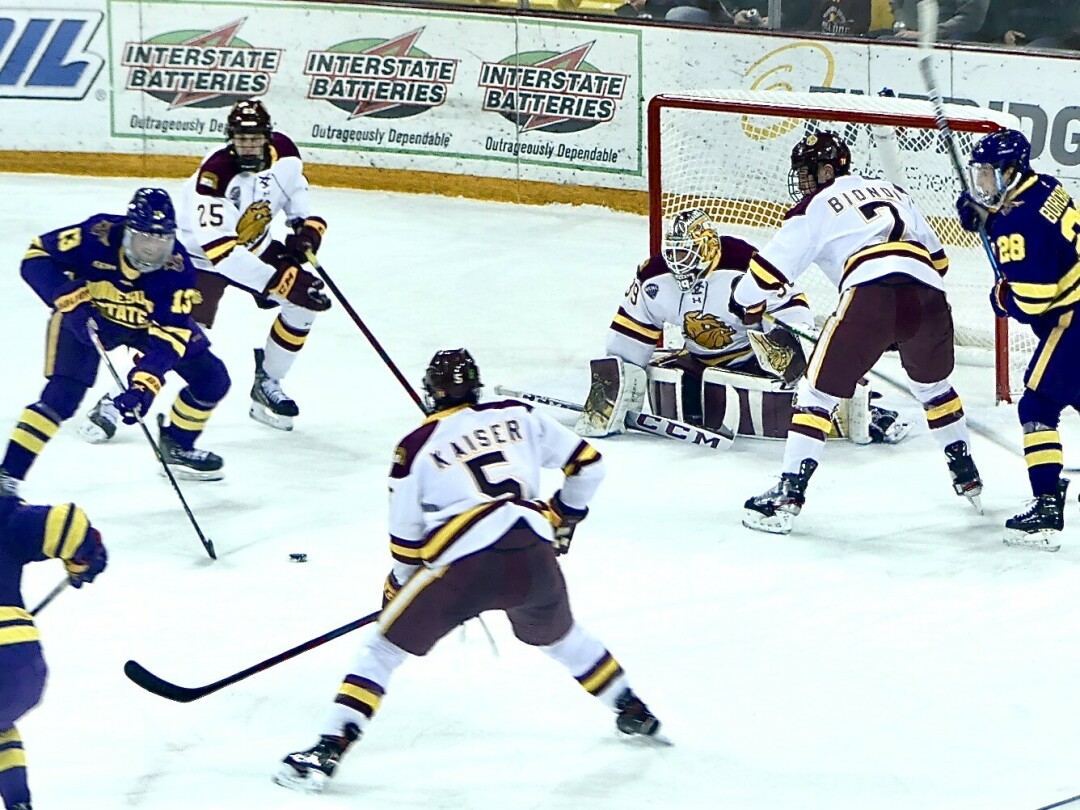 UMD goalie Ryan Fanti was poised for Brendan Furry’s try with a rebound as No. 1 MSU Mankato swept the Bulldogs to open the second half of the season.

Ryan Fanti, in UMD’s nets, had to work much harder against  many tougher scoring threats, to make his 23 saves.

During the season, my original concern for UMD was the lack of scoring. The Bulldogs have played most of the season getting balanced scoring and winning games with great team efforts, plus the goaltending of Ryan Fanti, but then also have had three big games – losses to Michigan 5-1, Denver 5-0, and the 3-0 loss to Mankato, all at AMSOIL Arena – where the lack of scoring caused them to be outscored 13-1.

The Bulldogs and their coaches will get it back together, and it had better be quick, because the Bulldogs head for a series at St. Cloud State this weekend, and right now, it looks like Mankato and St. Cloud are in a battle for instate supremacy. MSU Mankato is 18-4 while UMD slid to 11-8-1 overall.

Also on Saturday night, the minnesota Wild were hosts of the Winter Classic in the NHL, facing the St. Louis Blues at Target Field. The NHL had also been off for 10 days because of the same Covid scare that caused the NHL to pull out of the Beijing Winter Olympics.

For the Wild, all the anticipation and build-up had a hidden meaning, because the Wild had taken a four-game losing streak into the long break, and it was time to get out of it.

Unfortunately, the Wild emulated the Bulldogs for the first two periods, and fell behind 6-2, before Kirill Kaprizov led the charge in the third period.

But the loss dropped the Wild to 19-10-2 and into third place in the Central Division, while the Blues claimed the division lead at 19-9-5.

But if the Wild contributed to the sour sports weekend in Minnesota, the Vikings drew up the recipe.
Now, I am not a vaccination fanatic, but when I learned that in order to make certain flights, or go on possible auto introduction trips, or attend certain major sports events and sit in various press boxes, I would need to get vaccinated, I promptly did exactly that.

Maybe the Vikings should have said nobody could play – or get their salary – without getting vaccinated, but they didn’t. So Cousins played the rugged independent character and refused.

When the Vikings hopes to reach the playoffs grew slimmer to nearly zero, their next-to-last game at Green Bay against their biggest rival was the whole season wrapped into one frigid Sunday night.

It was then when Mother Nature struck, hitting Cousins with a positive reading for Covid-19. He was ruled out of the game, and the Vikings folded like an old accordion, 37-10.

That leaves the Vikings to finish the season against the Chicago Bears, who also are eliminated from playoff contention, in the finale this weekend.

And guess what? The Bears are on their only positive roll of the season, which could spell disaster for the Vikings.

Thank heaven for the high schools. Hermantown continues to rank No. 1, and the Hawks faced a surging Denfeld outfit Tuesday night at Hermantown.

The Hawks have continued to soar without Zam Plante, who should be just about ready to return with his dislocated shoulder properly relocated. They defeated a tough Delano team 6-2 last Friday at

Hermantown and are circled by every opponent who has them scheduled from here on out.

The entire Hermantown coaching staff was at the UMD game Saturday night, because they’ve got former players making major impacts on both teams. Hopefully, Hermantown coach Pat Andrews didn’t take too many notes from the Bulldogs.