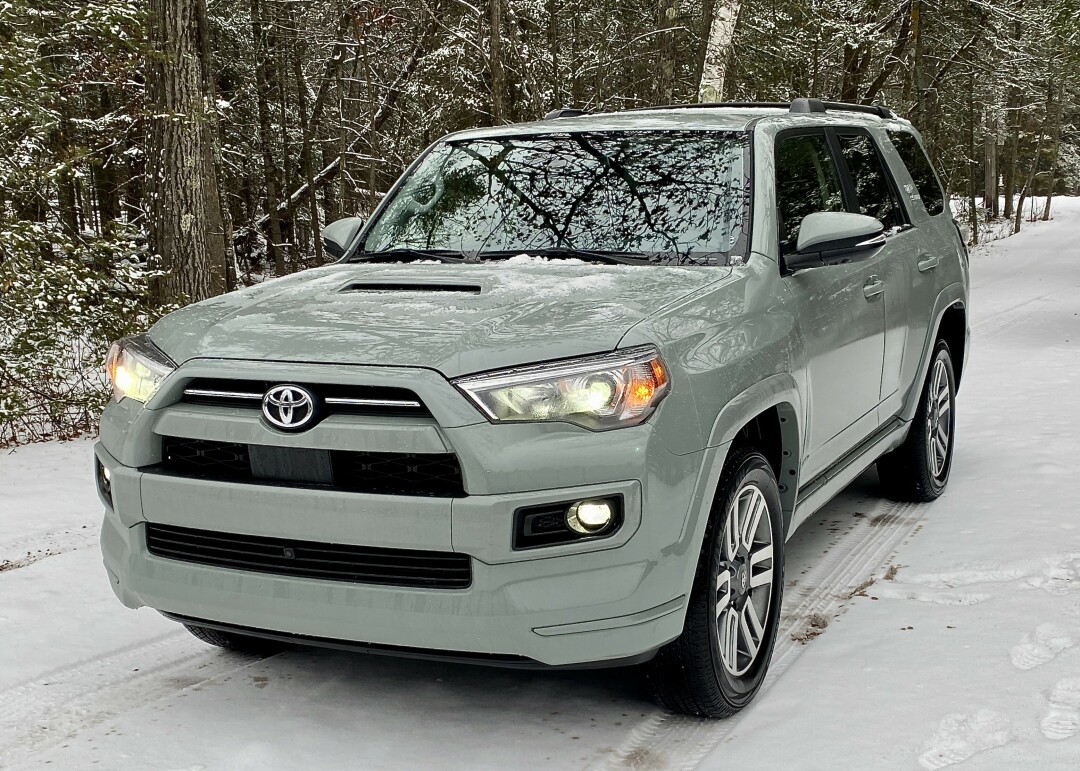 New 4Runner TRD Sport has all the capabilities of the 40-year-old Toyota SUV brand. Photo by John Gilbert.

For nearly 40 years, Toyota has been building a midsize SUV known to the world as the 4Runner.
Great name, because while it may not have been the off-road-capable forerunner that the Jeep was, its name alone means it is verifiably “the” 4Runner.

And while virtually every manufacturer of SUVs wants to take a shot at the Jeep’s incredible off-road heritage, even those that do a reasonable job in light off-roading fall far short of those Wranglers and other members of the Jeep family.

But the 4Runner is different, and the 2022 version of the 4Runner – part of the fifth generation – lets its performance and reputation carry it beyond where mere public relations might go.

If you talk to a Toyota dealer, you might get its salesmen to agree with you that there isn’t a great deal of new stuff on the 4Runner. But ask him which vehicle is in the greatest demand among all things Toyota, and he might say the 4Runner.

And in the same breath, if he knows his business, he might tell you the 4Runner will climb mountains and challenge any terrain the Jeep Wrangler will take on, and not finish second.

We can’t verify that, but the new 4Runner is impressively equipped for rugged duty and it is designed to stand the test of time, and it is not just another body-on-frame truck.

The other fact in 4Runner’s favor is that while the new models may seem expensive, they hold their value so well that demand for two or three year old 4Runners is off the scale.

A Toyota salesman I know said buyers seeking recent-year used 4Runners is right up there with the Tacoma midsize pickups on which it is based, and the full-size Tundra pickups.

The new 4Runner now can offer seating for seven, and it comes in more than a half-dozen varieties. The model I test drove was the “TRD Sport,” a newcomer to the family.

That’s six, and adding the TRD Sport borrows from some of its siblings in expanding the brand to provide pretty much the specific vehicle anyone might want.

The TRD Off-Road is the most rugged, probably, and it has seriously upgraded suspension and suspension, with the Premium version getting the cross-pattern adjustable suspension, which adjusts the suspension in a cross pattern – left front-right rear or right front-left rear – to offer better cornering and off-road stability.

The TRD Off-Road Premium has that, and that alone gives the new TRD Sport something beyond the scoops and specialty logos and badges and special seat surfaces to justify its price tag of the tester’s $48,199.

Painted “Magnetic Gray,” the TRD Sport has a base price of $44,620, and adding in such things as th kinetic dynamic suspension system, running boards and the moonroof jacks the price.

As seems to be the case in virtually all new vehicles these days, less is said about the powertrain, which used to be the main focal point of promotion.

In the 4Runner, you get Toyota’s 4.0-liter V6, which delivers 270 horsepower, and 278 foot-pounds of torque, which is certainly enough to climb your neighborhood avenue, if not cliff. And it also will tow a maximum of 5,000 pounds.

Transmission is a 5-speed automatic, operable with paddles for manual control, and with a part-time 4-wheel-drive system and Toyota’s ActivTRAC, it seems as though five gears are enough, since you can double them by shifting back and forth from 2-wheel to 4-wheel drive, and choose high or low ranges.

We found that we pretty well matched the EPA fuel economy figures of 16 city and 19 highway miles per gallon, which is OK for a rugged vehicle that has such consumer-aided assets, although a lot of competitors will get from 25 miles per gallon and upward toward 30.

Maybe it’s just a matter of time until Toyota bolts one of its hybrid systems into it.

If Toyota has been subtle about toughening the 4Runner for all off-road capabilities, now it is just as subtle about sophisticating the whole package to work more smoothly and be more civilized on normal roads. Those are the assets the refinements make on the TRD Sport, and the comfort inside is evidence that it works.

The seats are covered with SofTex, which is some sort of bullet-proof material that is pleasing to the touch and obviously rugged.

It was just a matter of luck that in the week I had the 4Runner TRD Sport, my Duluth-area was hit by a pretty healthy snowstorm, which meant I could fiddle around with the settings and churn through the plow-left snow-piles with ease.

If you are a serious off-roader, this TRD Sport would work well, and if you’re not into off-roading, you can actually enjoy spending your winter months taking on blizzards and foul-weather conditions.

It is also fascinating to observe the new Jeep Grand Cherokee go from being off-road tough to on-road sophisticated, but even there, the Toyota 4Runner TRD Sport gives that brand an equal competitive stance either on or off the road.