How about a little Christmas noir? 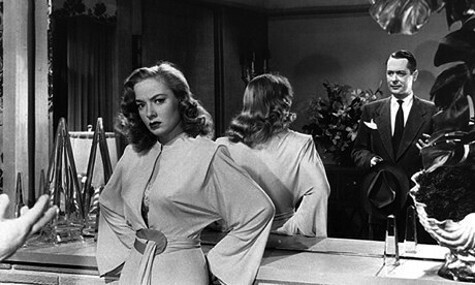 Director and star Robert Montgomery is only seen in reflection for most of Lady in the Lake. Here he is seen with quest star Audrey Totter.

“My name is Marlowe. Phillip Marlowe. Occupation: private detective. Somebody says, ‘Follow that guy,’ so I follow him. Somebody says, ‘Find that female,’ so I find her. And what do I get out of it? $10 a day and expenses. And if you think that buys a lot of fancy groceries these days, you’re crazy.”

I say this is modeled after Chandler’s 1943 novel of the same name because it leaves out the drugs aspect of the story and messes with the details.

And I say it’s an oddity because it’s a film noir that takes place during the Christmas season and is executed with the novel conceit that we, the audience, see the movie from Montgomery’s perspective. Advertising played on that aspect, saying “YOU and ROBERT MONTGOMERY solve the mystery!”

Montgomery – father of Elizabeth Montgomery, Samantha in Bewitched – had played scores of roles as a contract player for MGM since 1929, including two Academy Award nominations for Night Must Fall (1937) and Here Comes Mr. Jordan (1941).

Lady in the Lake would be his last film for the studio.

In Montgomery, MGM had a leading man perfect as the handsome ladies man, a role he played opposite fellow MGM stars such as Norma Shearer, Greta Garbo and Joan Crawford (six films together). Chafing at repeatedly being cast as the same character, in 1937 Montgomery lobbied hard to play the homicidal maniac in Night Must Fall. Studio head Louis B. Mayer predicted Montgomery would be a failure in the role, but it earned him his first Best Actor Oscar nomination.

A decade later Montgomery was about to end his career with the studio where he began by making an experimental picture.

Besides the intro and a couple other moments when Montgomery, in character, confronts the camera to explain the narrative, and a few times when he looks in a mirror, the movie is shot as if we were in Philip Marlowe’s shoes.

While it sounds like a great idea, it doesn’t really work. What we are really seeing is what Marlowe would see if he had the tunnel vision of a camera and absolutely no peripheral vision.

For example, when we face someone to talk to them, yes, they are in front of us, but they are not exclusively dominating our vision because our peripheral vision takes in many things around them. But not in this movie.

Metro-Goldwyn-Mayer bought the film rights to Chandler’s best-selling mystery novel for $35,000, but had to remove the complex drug motive for the murders.

Because the script contains a dirty cop, Lt. Degarmot (Lloyd Nolan) the script played up the humanity of his boss, Capt. Kane (Tom Tully).

It was originally purchased as a starring vehicle for MGM star Lana Turner, but in April 1946 MGM announced it was ending contract player Audrey Totter’s loan-out to Universal to appear in The Killers with Burt Lancaster in order for her to take the lead female role in Lady in the Lake. It was her first star billing.

It is known as the first motion picture to use in its entirety the subjective camera technique, in which all the events in the film are seen from the viewpoint of the protagonist.

The film is divided into three segments, and between each segment and at the film’s opening and closing, Robert Montgomery, as Marlowe, faces the camera and addresses the audience directly.

But before we meet Marlowe, the film begins with the sound of “Jingle Bells,” and the credits are printed on Christmas cards. 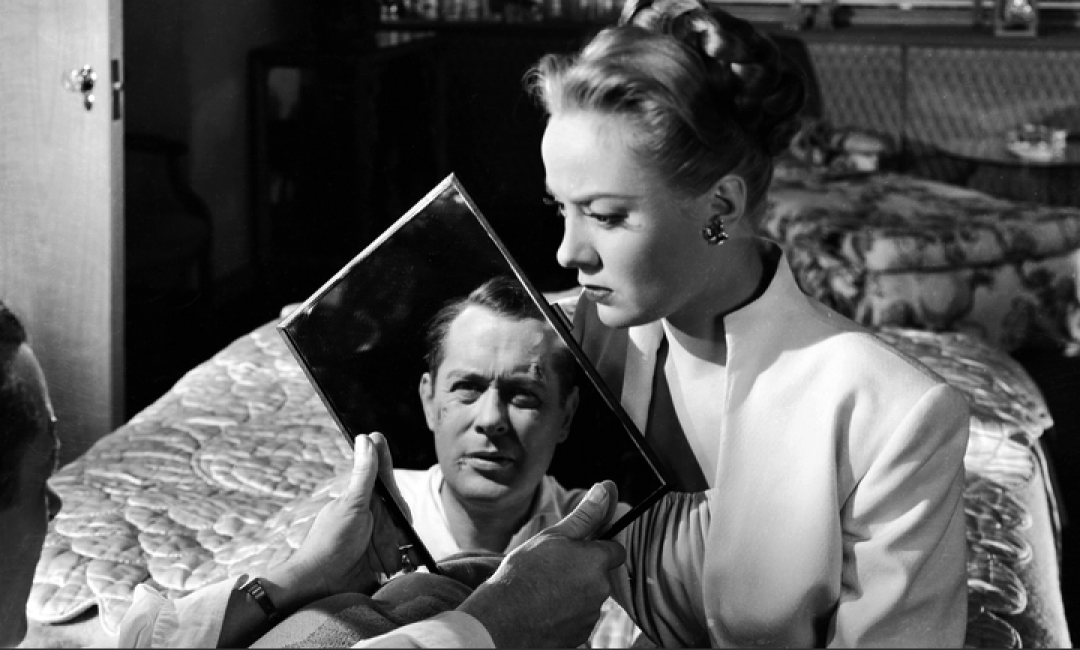 Marlowe – and the audience – gets a look at his beaten up face when he checks himself out in a mirror.

Some contemporary reviewers and moviegoers found the subjective technique too distracting. I didn’t find it distracting, just different.

The story begins with Marlowe explaining that he decided it was safe to write about murder than investigate it. He’d sent off a short story called “If I Should Die Before I Live” to a publishing house that he says are “specialists in gore.”

He hears back from A. Fromsett (Audrey Totter), who invites him to her office to talk about the story.

Once there, when she offers him $200 for the story when other writers are getting a penny a word, Marlowe realizes she wants him for his PI skills, not his writing. It’s three days before Christmas, and she wants him to find her boss’s missing wife Crystal.

Marlowe has all the snappy lines. As A. Fromsett is extoling the virtues of his short story to her boss by saying it’s “so full of life and vigor and heart and…What would you say it’s ful of Mr. Marlowe?”
“Short sentences,” he answers.

Because of the subjective camera, thereare little effects that presage the 3-D movement coming in the next decade, with people shoving things directly at Marlowe and the viewer.

For example, when Marlowe goes to visit Crystal supposed boyfriend, Chris Lavery, a southern gent dressed like a cabana boy, Lavery eventually punches a ringed fist right into our vision – and Marlowe’s kisser.

Lady in the Lake was an unusual story for Chandler because he took Marlowe out of his natural environment in LA and put him in Bay City (Santa Barbara) and a mountain lake town.

The jam Marlowe gets into with the Bay City cops is reminiscent of the run-in Lebowski has with the Malibu cops in The Big Lebowski. You can fell the connection.

Ultimately, it’s a fun film, and you’ll be happy to know, “Marlowe never sleeps until all’s well with the world.” 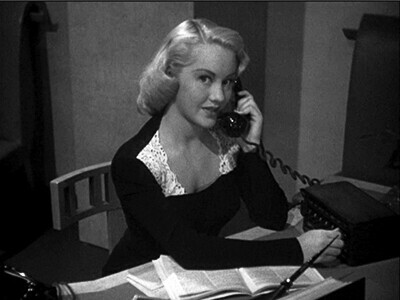 A bit of trivia here: Actress Lila Leeds has a small role in The Lady in the Lake as the publishing house receptionist that Marlowe can’t keep his eyes off of. A year after this film came out, Leeds was arrested with Robert Mitchum for smoking marijuana. She did 60 days in jail, but unlike Mitchum her career did not recover. Her final film made in 1949 is She Shoulda Said No, about a woman who falls to the evils of marijuana.