Nobody won the game somebody had to win 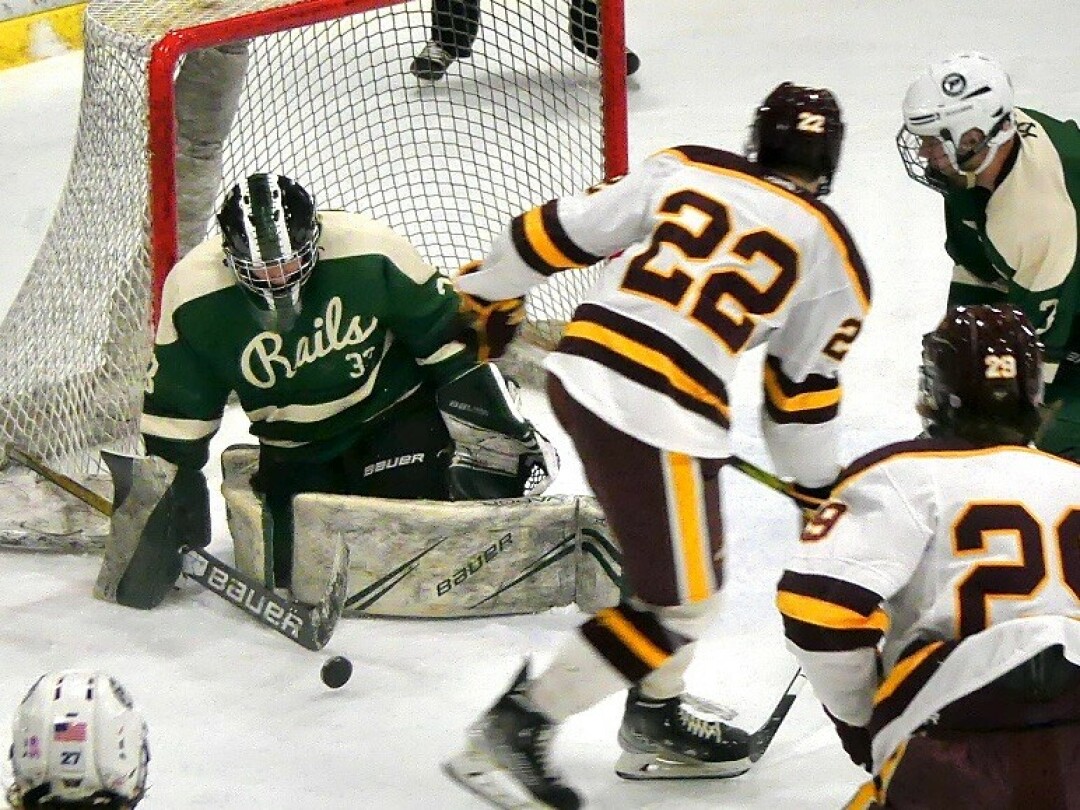 Proctor goaltender A.J. Reyelts made 48 saves against Denfeld Saturday as the Hunters won 6-2 at Heritage Center. Photo by John Gilbert.

After all the intrigue and controversy in Duluth hockey this year, the normal huge showdown between Duluth East and Cloquet-Esko-Carlton is not normal at all, nor is it huge. But I  was intrigued by that very thought as I headed off on my journey to the West End to Essentia Heritage Center last Tuesday to see East, which was an unprecedented 0-7, take on Cloquet, which was something like 3-5. This would be a game someone had to win!

So I headed out early, because in past years the East-Cloquet rivalry has attracted overflow crowds. I parked easily, and walked inside and found – nobody.

Turns out the nasty cold and the repeated and overdone warnings about this huge blizzard that was supposed to drop a foot of snow on the Duluth area had caused school closings in the area, and there is a school board rule that if school is not held during the day, all extra-curricular activities are also postponed. So there was no game.

That means it finally happened. In a game where somebody had to win, nobody won.

A friend sent me a nice online piece on Dec. 18 written in Zenith City News, which declared that Dec. 18 was the day the legendary Wally Gilbert was born in 1900.

The friend asked if he was a relative of mine, and I responded to thank him and tell him Wally Gilbert was my father, and while it was a nice feature story about his career in pro baseball, football and basketball, the strange fact is that he was born in Oscoda, Mich., on Dec. 19 – not 18 – of 1900.

I have no idea how you correct such an odd mistake, but my dad’s picture hangs in the lower entry way of AMSOIL Arena, where those inducted to the Duluth area Hall of Fame are located. He’s wearing a uniform from when he played third base for the Brooklyn Dodgers, and there is a bird on the cap. Turns out, the Dodgers were known then as the Brooklyn Robins, because of their manager, Wilbur Robinson, and they changed their name right about then, as my dad hustled home after the season to play pro football for the Duluth Eskimos.

With both the UMD men and wom-en taking a few weeks off for holiday break in their respective hockey conferences, high school hockey has the spotlight – despite my being unable to find some of the games.

I did find another one, with Proctor planning Denfeld at Heritage on Saturday afternoon.

The Hunters have one of their strongest teams, and should do very well this season. Proctor lacks the depth to compete at that level with Denfeld, which earlier beat Cloquet-Esko-Carlton 6-2.

It was destined to be a fairly easy Denfeld victory, by 6-2, but it didn’t start out that way. The Hunters have some skilled forwards, and they came at Proctor from the opening faceoff, but a sophomore goaltender named A.J. Reyelts kept getting in the way of those shots.

Five minutes into the first period, Proctor got a rare attack going and swarmed to the crease, and Wyatt Mineheine, another sophomore, poked the puck in for a 1-0 Rails lead.

The Hunters intensified their attack, but Reyelts was brilliant in goal, and it stayed 1-0 until three minutes remained in the opening period. Then Whittaker Heart scored from the right circle and it was 1-1.

The Hunters poured on the attack then, although they don’t appear to have enough depth to play more than two lines, using fragments of those two to make a third, but the goal was proper inspiration, and Cooper McClure scored 50 seconds later to make it 2-1 Denfeld, but hardly justification for an 18-4 edge in shots.

McClure got his second of the game in the second period, and Simon Davidson made it 4-1 early in the third period, as Denfeld’s barrage of shots showed 44-12.

McClure completed his hat trick at 8:13 of the third for a 5-1 cushion, and Mineheine countered at 13:22, as the Rails finally got the shot count up to 20.

Davidson scored his second goal under unusual circumstances, with 1:11 remaining. Denfeld was two men short by penalties in the closing minutes, and Proctor coach Jeff Laspi pulled Reyelts for a 6-on-4 power play, but Davidson hit the open net.

The final shot count was 54-23 for Denfeld, but A.J. Reyelts will cause future Proctor opponents to fine-tune their shooting.

In a huge conquest, Hermantown, with star Zam Plante sidelined with a dislocated shoulder, went down to the Twin Cities and whipped Mahtomedi 3-0 as sophomore goaltender dane Callaway blanked the Zephyrs. Hermantown outshot Mahtomedi 43-16 to remain undefeated. 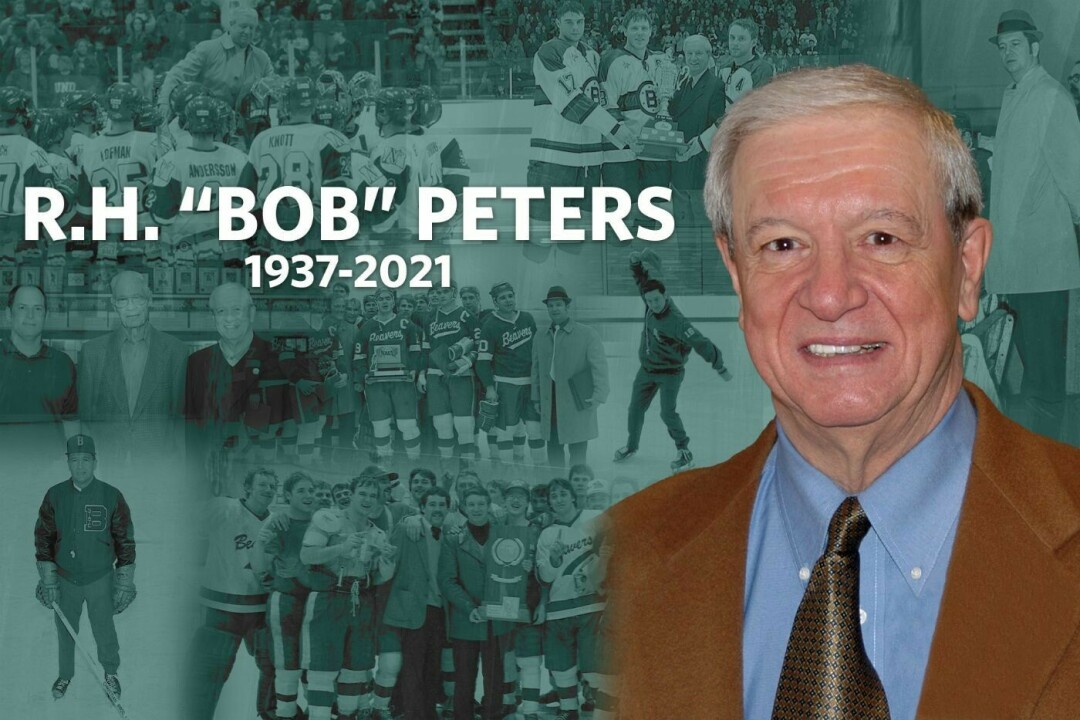 It was sad to hear of the death of R.H. “Bob” Peters last weekend at age 84. Peters was a young coach who had just taken over the North Dakota program, where he had been a goaltender, back in 1964, when I started my sportswriting career at the Duluth News Tribune.

I remember Peters stopping to speak at a Duluth Blueline Club meeting at the Radisson and he had the capacity crowd in stitches as he explained what going to Division 1 hockey would mean to Duluth. He explained that when you go to Houghton, Mich., to play Michigan Tech, try to avoid going on Winter Carnival weekend.

“Tech is an engineering school, so they don’t have a lot of female students,” Peters said. “But on Winter Carnival weekend, they bring busloads of young women to Houghton, and the Tech players barely touch the ice, they’re so fired up.”

A year later, Peters took North Dakota to the WCHA title and the NCAA final four – as it was called in those days.

Then he abruptly left, after two seasons, to go to Bemidji State. Nobody could figure out why, but Peters turned Bemidji State into his own dynasty, winning 13 national championships as the program went from NAIA, to NCAA Division 2, and finally, when the NCAA dropped all D-2 hockey competition, the Beavers moved to Division 1.

He had some outstanding players who learned the game under him, including future NHL star Joel Otto from Elk River, and Bryan Grand, a speedster from Roseau, who starred for Peters as Bemidji State as an All-American in 1968, ’69 and ’70 on Division 3 championship teams.

He was a great teaching coach, and his players held him in the highest regard, even if they went on to play in the NHL. He also oversaw the establishment of the women’s hockey program at Bemidji State.

The NCAA football bowl games are already under way, and I find most of them failing to tickle my anticipation much.

Once again, the NCAA selection committee bought into the idea that the Southeast Conference is so dominant that it should have two of the four selected teams, in Alabama and Georgia. Michigan and Cincinnati are granted roles as cannon-fodder for Alabama and Georgia.

My theory on the football playoffs is simple. The Power Five conferences and a top independent or lesser-conference representative should be considered for the four finalists. But since each conference plays off to a champion nowadays, there should never be a time when more than one team from any conference gains the final foursome.

Everyone is enamored by Alabama beating Georgia in the SEC playoff title game, but remember than Georgia beat Alabama in a regular season game – so the teams are actually 1-1 against each other.

I’m sure ESPN and the selection committee will be ecstatic if they decide their “best-of-three” season standing against each other in the national championship game, but I’m tired of the manipulation to justify the constant promotion of the SEC.

If it’s the best, then their best team should win it; but how can any conference win it if three of the Power Five are not represented?

Now we all have to pull for a Michigan-Cincinnati final. Would that be fitting?