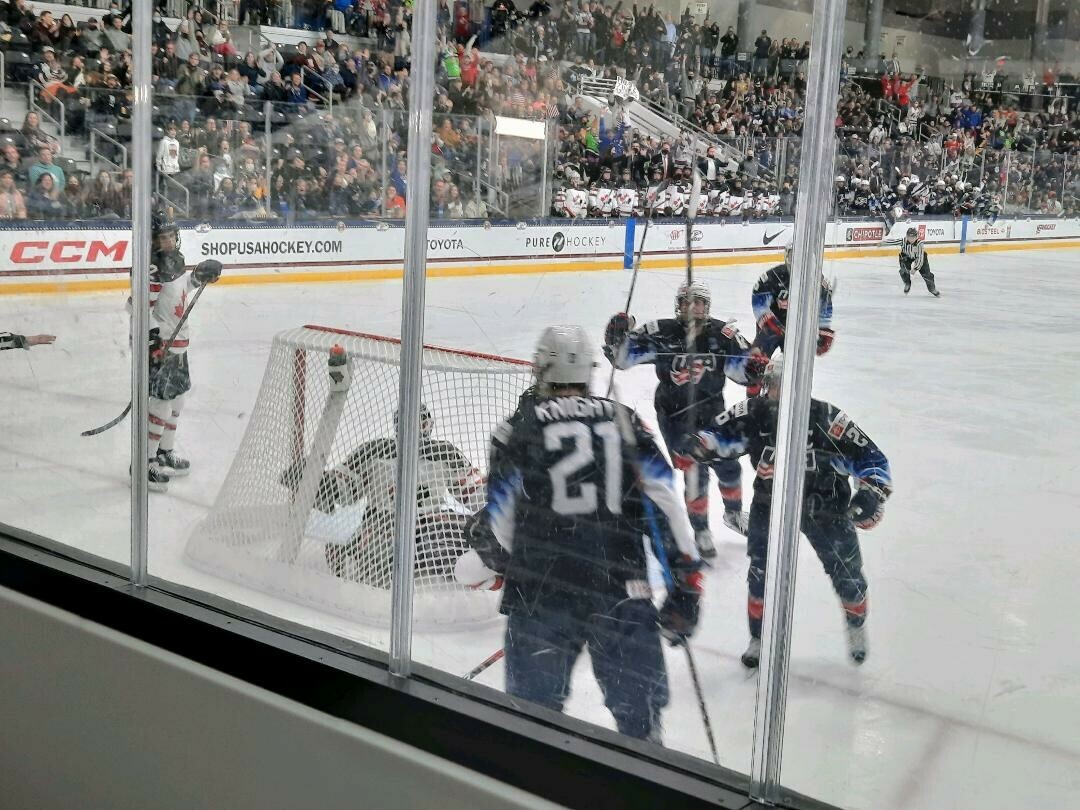 ST. LOUIS – I am still in the groaning phase as I have just watched Team Canada win for the second time in three nights versus the TEAM USA Women’s National Team.

Canada won on Wednesday evening by a 2-1 OT margin and have just emerged victorious in a 3-2 OT tilt. These games were quite fast, physical and intense, as one would expect between these hockey and geographical neighbors.

Games five and six of the USA Hockey My Why Tour were in the Gateway City this week and put on a show and a half.

I am letting my allegiances show here, but yes, it took a bit of time to let the emotions settle down post-game after watching 120 minutes plus of the best women’s hockey on this planet.

If anyone is keeping track, the Canadians have a four games to two lead on the tour so far. If my temporary mood is still in the middle of the game, I can’t help it. If I’m that into it, that’s nothing new. It’s hockey, and it’s Team USA. And the Olympic Games are right around the corner.

If you are a hockey fan and a Minnesotan this hockey season, these next few months are going to be hockey nirvana.

My thoughts on the USA women at this point in the tour are that Team Canada has a slight edge. And that edge lies within having Marie-Philip Poulin on their roster.

In my book, she is the best women’s player in the world at this moment. All else between these two teams is relatively equal after that. Both teams have excellent netminding, strong defense and forward groups and have good mixes of veteran and emerging players managed by outstanding coaches.

I am left to wonder if Team USA has replaced what they lost after winning Gold in 2018. Gone are the Lamoureux twins, Gigi Marvin and Meghan Duggan, all solid contributors to the team’s success.

Of course, when the games begin, you will be hard-pressed to find any separation between the two clubs. If you were an expert or amateur analyst and asked yourself if either of them had an edge over the other going in, I think your answer has to be no. I personally would offer this, though; the U.S. club is going to have to find a player who can rise up to the level of Poulin. If they do, I feel like their chances to hang on to their Gold medal status will vastly improve.

USA HOCKEY will introduce its Women’s Olympic roster during the second intermission of the Winter Classic at Target Field on New Year’s Day.

There are six native Minnesotans on the USWNT Residency Roster and nine players involved in Collegiate hockey in the state.

Hockey Canada is expected to finalize their roster decisions by late this month.

THE 2022 IIHF WORLD JUNIOR CHAMPIONSHIP is also about to begin. TEAM USA will go in as the defending gold medal champion and will be looking to repeat. The Americans have never achieved this feat before.

Do they have a legitimate chance at doing so?

Most of the consensus I’ve read is that it will be an epic challenge for the USA squad. In fact, I’ve seen one publication state that they will not medal.

I believe it will be tough for the team to win the tournament this year, but I think that the right plan or strategy can prevail in certain situations. I’m taking a wait-and-see stance at this point.

The tournament begins on 12/26, with Team USA playing Slovakia that evening. All games will be broadcast on the NHL Network in the States.

Unlike the women’s national team, we won’t be able to look at the team and its capabilities until right before the tourney. Team USA will play two pre-tournament games against the Czech Republic and Finland. Those games will be on 12/20 and 12/23.

Locally, the team will feature four native Minnesotans, and six of the players are currently playing collegiately in The North Star State.

UMD Bulldog forward Dominic James is on the 25-man roster. IN THE PRELIMINARY ROUND, the USA will face Slovakia, Switzerland, Sweden and Russia. The quarterfinals will start on 1/2, with the semifinals on 1/4, followed by the Final on 1/5.

So, does the USA have a shot at it? Last year’s team was an exceptional group. It should have surprised no one that they won the Gold. The star power and collective talent level probably don’t match last year’s team. I believe the team will medal. It’s up to them which one they will get. I’m looking forward to this event as always!

THE PREVIOUS WEEK HAS been a washout of sorts for the Minnesota WILD. After returning from their four-game road trip in the early hours of last Monday morning, the team was scheduled to play the Carolina Hurricanes on Tuesday night.

At that point, the Canes’ were beginning to have problems with COVID tests. After several players tested positive for the virus, the game was postponed. The players that tested positive have been locked down in the Twin Cities, while the rest of the team went on to the following game site.

Thursday night in St. Paul the team met the Buffalo Sabres and lost in an uninspiring performance by a 3-2 score in the shootout. It was a flat showing against a team the WILD is better than and should’ve won against. The Sabres were the better club, and if not for WILD netminder Cam Talbot, Buffalo would have won this game by three or four goals. The week didn’t improve for the WILD.

On Friday, the NHL announced that due to the number of players who tested positive on the Florida Panthers, the WILD’s next opponent, this game was postponed too.

In addition, their team, along with Calgary and Colorado, have been shut down until 12/26 by the league.

The league’s transaction log has been dominated in the past few days, with players having to enter the COVID protocol shutdown period and the teams having to recall players from their affiliates to play their scheduled games. I have heard there are up to 60 players and other team personnel around the league in protocol at this time.

If current trends hold regarding the virus, I think the next couple of weeks will be precarious for pro athletes and the population in general. Speculation has begun as to whether the NHL players will still opt to go to the Olympics, and it’s a dicey situation at the moment, to say the least.

If I had to offer a guess, I’d say the players are going to change their minds about going with the risks involved and possible quarantines in a foreign country looming significant, among other issues. It is a very challenging time for those involved. Let’s hope that the proper decisions are made and that we can get past this very soon. PEACE

HAPPY HOLIDAYS TO ALL! Please celebrate safely! OVER & OUT!