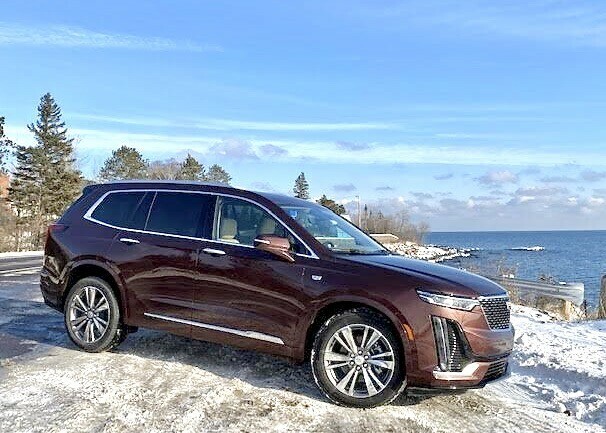 The 2022 Cadillac XT6 is loaded with luxury and not oversized. Photo by John Gilbert.

As we head into the final few days before Christmas, you’ve got to love this time of year, when you go from not knowing what to get somebody as a gift, to scurrying around thinking of a million things that cost more than you can afford.

In the car-testing business, there are numerous possibilities in all price ranges.

At the top end, you could buy a luxury SUV, say a Cadillac, and you could choose from moderately sized alternatives with class, luxury and comfort but without the heft, if you looked at the 2022 Cadillac XT5 or XT6.

For a more modest amount, down around $500, you could buy a family member – or your family as a whole – the best winter insurance available, which are “Nokian one” all-season tires. They will astound you at how they run smooth in the dry and work well in the face of the worst winter storms.

My favorite suggestion for car-owners at Christmastime in or around Duluth, Minnesota, is to do two specific things.

First, throw away the usually reliable Minneapolis Star Tribune from a couple of weeks ago, which ran a syndicated story on its weekly automotive page by a writer from Detroit.

Now, Detroit doesn’t have hills like Duluth does, so we can cut the guy some slack because maybe he’s never driven in the Upper Peninsula, and never needed true winter tires.

But he wrote that the newest all-season tires are similar to what we used to call “snow tires.”

No. Not true. There are summer tires, there are all-season tires, and there are snow tires, and you get to choose what you want or need.

Tire companies make tires for all circumstances, and the newest top models are the best all-season models, which can handle the duties of winter driving better than more basic summer tires, which run long and smoothly but lack the ability for foul-weather traction, which is as important to stopping and cornering as to going forward.

Companies can put whatever designation they want on tires, it seems, but not many have mastered the technique of making tires that work in snow and on ice and also run smoothly when you’re not on snow or ice, which is 90 percent or more of the time, even in severe winters, because the plows come out and a day or two after a storm, you’re back on pavement.

For something like 35 years, I’ve been completely sold on Nokian tires, which used to be Nokia but gained an “n” on the end after the Nokia cell phones became worldwide big-sellers.

I found the best advice from a fellow named Dave Erickson, who once ran Bloomington Tire Center in the Twin Cities suburb. He was a racer and knew every detail of tires, and pushed Nokia tires, which I found had the unique ability to go year-round, last a long time, and alleviate anxious moments on wintry roads.

Nokia designed and built tires for winter racing above the Arctic Circle, and has continued to make tires with a compound that retains its flexibility no matter how cold the weather is. The company made an all-out winter beater called the Hakkapeliitta that preceded the Bridgestone Blizzak and remains a superb tire today.

Blizzaks are excellent on ice and snow, but their tread decomposes as part of the principle for aiding grip, so you’ll wear them out faster on dry pavement.

My stubbornness was borne from experience, because I replaced the super-aggressive-looking Michelin XAS asymmetric-tread Michelins that came on a beloved Saab 900 we purchased. Impressive as they looked, the XAS tires slipped and slithered when they should have been gripping and holding course.

I went with the Nokia all-season, and found them to be so good I never saw the need to go to the Hakkapeliittas, despite Dave Erickson’s urging. Dave got out of the tire business a few decades ago, and we moved from the Twin Cities to Duluth since then, where I found a place called “Foreign Affairs” that does auto repair and also sells tires.

Jeff Hofslund owns Foreign Affairs – great name – and has kept close track of the tire industry. He sold a lot of Nokian tires in recent years, so many that he became the No. 1 sales entity for the Finnish company in the U.S.

He’s not sure if he still holds that honor, but while he contracts with Tire Rack to obtain and overnight-ship any tires you may want, he has a separate deal with Nokian, which insists on avoiding large tire shops for what they believe is superior personal satisfaction from smaller companies.

The last Nokians I bought are still on the family Mini Cooper, and they are the WG-3 directional model that still stick to the road effectively after five years.

We bought a new set for my older son as a gift and they are the “Nokian one” model, which sticks much the way the WG-3 does, but are not directional, and which will run for significantly longer miles, and are amazingly silent when running on dry pavement.

As a potential Christmas gift for a family member, I called Jeff Hofslund and asked how much a new set of tires would cost.

“It depends,” he said, “on what size, what kind of car, front-wheel, rear-wheel or all-wheel drive, and what type of use would the tires get.”

Such personal service is right up Nokian’s alley. The new “Nokian one” somehow bridges the compromise between working on icy avenues in Duluth and being just as impressive in longer way without the need to switch to summer tires.

My reasoning is that if you’re driving home in a winter storm, and as you go into a curve, you feel you car losing traction and starting to skid toward the ditch. At that moment, how much would you pay to eliminate that skidding, heart-in-the-throat feeling?

I would say $500 is definitely a reasonable price for never having that feeling again.

The point of suggesting a set of Nokian tires as a Christmas gift was brought to mind by a couple of other options.

You could buy as a gift either of two high-end Cadillac vehicles – the XT5 SUV or the XT6, which is a little larger SUV. Both are perfect compromises between sedans or station wagons and midsize SUVs, as far as people-hauling goes.

If you can afford the $3,000-$5,000 difference, then you can decide, but if you find both prices a little high, and you don’t have room under your Christmas tree to park either one, there are other ideas.

For example, I had the XT5 and XT6 close enough together to make a couple of comparisons, because up in the Great White North, we had some cold weather and a bit of snow, which didn’t stay long but gave me the opportunity to compare the all-wheel-drive vehicles.

The XT5 was black, which in Cadillac-ese was Stellar Black Metallic. It also was lighter and felt a bit sportier – although both vehicles were powered by the same high-end 3.6-liter V6 with 9-speed automatic transmission.

The XT5, I must say, slithered around a bit when the roadways got slippery from the snow and ice coating. I got out and checked and noted the vehicle had Michelin Primacy tires, which fit my theory that Michelin takes pride in tires that will endure high speeds and last a lot of miles.

Neither of those traits is necessarily good for winter conditions.

The XT6, meanwhile, was the “Pre-mium Luxury” version, and was painted Rosewood Metallic. It had enlarged 20-inch alloy wheels, on which were mounted Continental tires, with a lot of cross-treads that are designed to spit out snow and grip slippery road surfaces better. They did that, as we proved when we had more snow in the XT6’s week. It handled it all with no problems.

Both vehicles were loaded with creature features, and the VT5, which is targeting those who might want to do some light off-roading, had an additional mode switch that allowed you to select driving modes from tour, to AWD, to sport, and to off-road. Frankly, I can’t see it as an off-road vehicle, but the power is there and the AWD system.

You can also change modes with the XT6, but not quite as aggressively, as though Cadillac knows the difference between country club and rock-climbing.

Both Cadillacs are sized right, above the now-popular compact SUVs but well below the giant SUVs like the Escalade at the top of the Cadillac pecking order.

Just make sure, for the price, you insist on getting premium all-season tires mounted. When your total contact with any roadway is about one square foot of asphalt at each corner of your car, staying in contact is important.