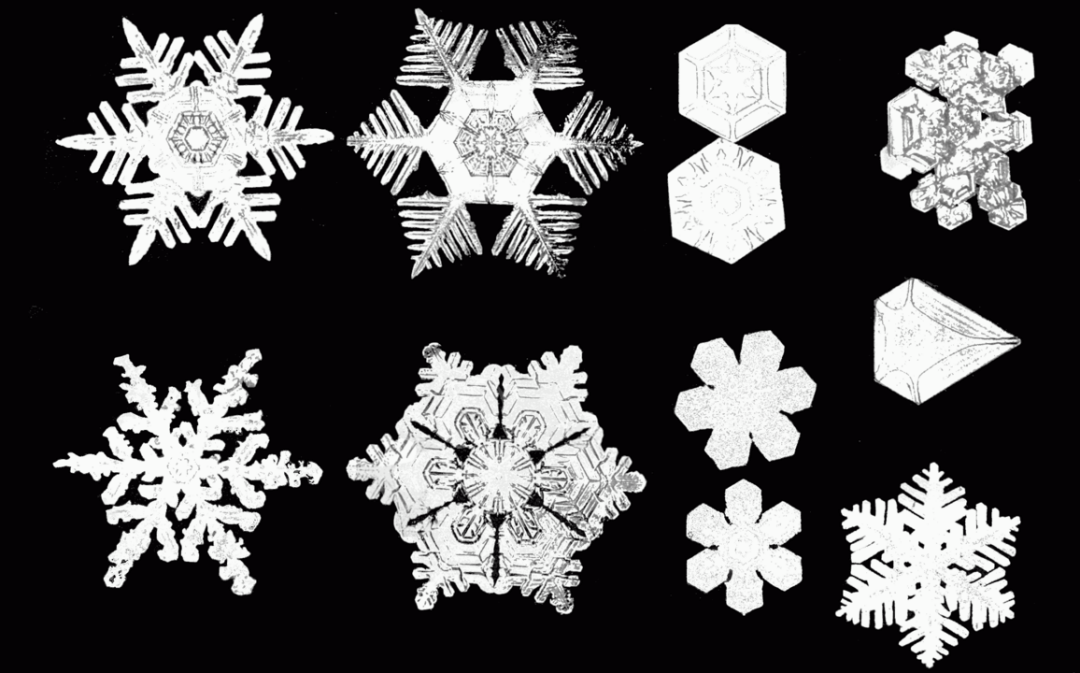 Like tiny ballerinas, the crystals float across the sky and dance back down toward the Earth. The wind-tossed path that each crystal takes as it grows, and the conditions it encounters along the way, are what make each snowflake unique. (Photos: Popular Science Monthly Volume 53, Public Domain, Wikimedia Commons)

Snowflakes whirled outside my office window, blanketing the rainstorm’s aftermath in white and distracting me from work.

Looking back down, I tried to focus on my screen, where the words Growing Up Wild sat above a rudimentary diagram of the Museum’s exhibit hall.

Ideas are coming together for our new exhibit, scheduled to open in May 2022. We’re excited to explore the many different ways that Northwoods critters begin, grow, survive and eventually become adults.

It’s fascinating to compare and contrast the life cycles of bears, butterflies, bluegills, eagles, humans and more. Each critter takes their own unique path through the adventure of childhood, and it can be fun to imagine ourselves in their shoes.

Gazing back out the window, it struck me that the dancing snowflakes also grow up wild.
Just like each of us and the other critters, snowflakes must begin somewhere, and then be shaped by changing circumstances at each moment of their development.

How does a snowflake begin?

In the sky, individual water molecules float suspended among molecules of air. Although temperatures may be well below 32 degrees and what we think of as the freezing temperature of water, the water vapor won’t freeze without help.

Help comes in the form of ice nucleators around which the water can assemble into the crystal structure of ice.

Bits of dust and soot can become nucleation sites, and scientists are also discovering the importance of airborne bacteria. In particular, some bacteria have surface proteins that look a little bit like ice crystals.

The protein template makes it much easier for water molecules to snap into place and begin the freezing process.

Why would a bacterium have evolved this trick?

Well, these microbes need their ice-forming powers to access food. When on the surface of a leaf, the sharp edges of the ice they cause to form cut into the plant’s cells and spill juicy nutrients into the bacteria’s waiting arms.

On a windy day, though, those bacteria might get scooped up into the upper atmosphere. High above the Earth, the bacteria are cold, dry, and hungry. They need to get back down, but they are too light to fall on their own. Here’s where the ice-nucleating protein comes in handy again. The bacteria gather water molecules around themselves and form snow crystals.

Like tiny ballerinas, the crystals float across the sky and dance back down toward the Earth. The wind-tossed path that each crystal takes as it grows, and the conditions it encounters along the way, are what make each snowflake unique.

The first form that snowflakes take is a hexagonal prism with six facets, plus top and bottom basal facets. This shape is a result of the crystal structure of water, or the way the molecules line up when it forms a solid.

How that crystal grows is a result of slight shifts in the temperature and humidity the flake encounters as it travels.

For example, when a snow crystal spends time in an area with low humidity, that promotes flat surfaces to grow. It’s easier for the sparse water molecules to latch onto thin, rough edges than a smooth face.

When that crystal moves into an area of higher humidity, branches sprout from the six corners because of the way they project into the humid air. Sticking out farther causes branches to grow faster, in an example of a positive feedback loop. 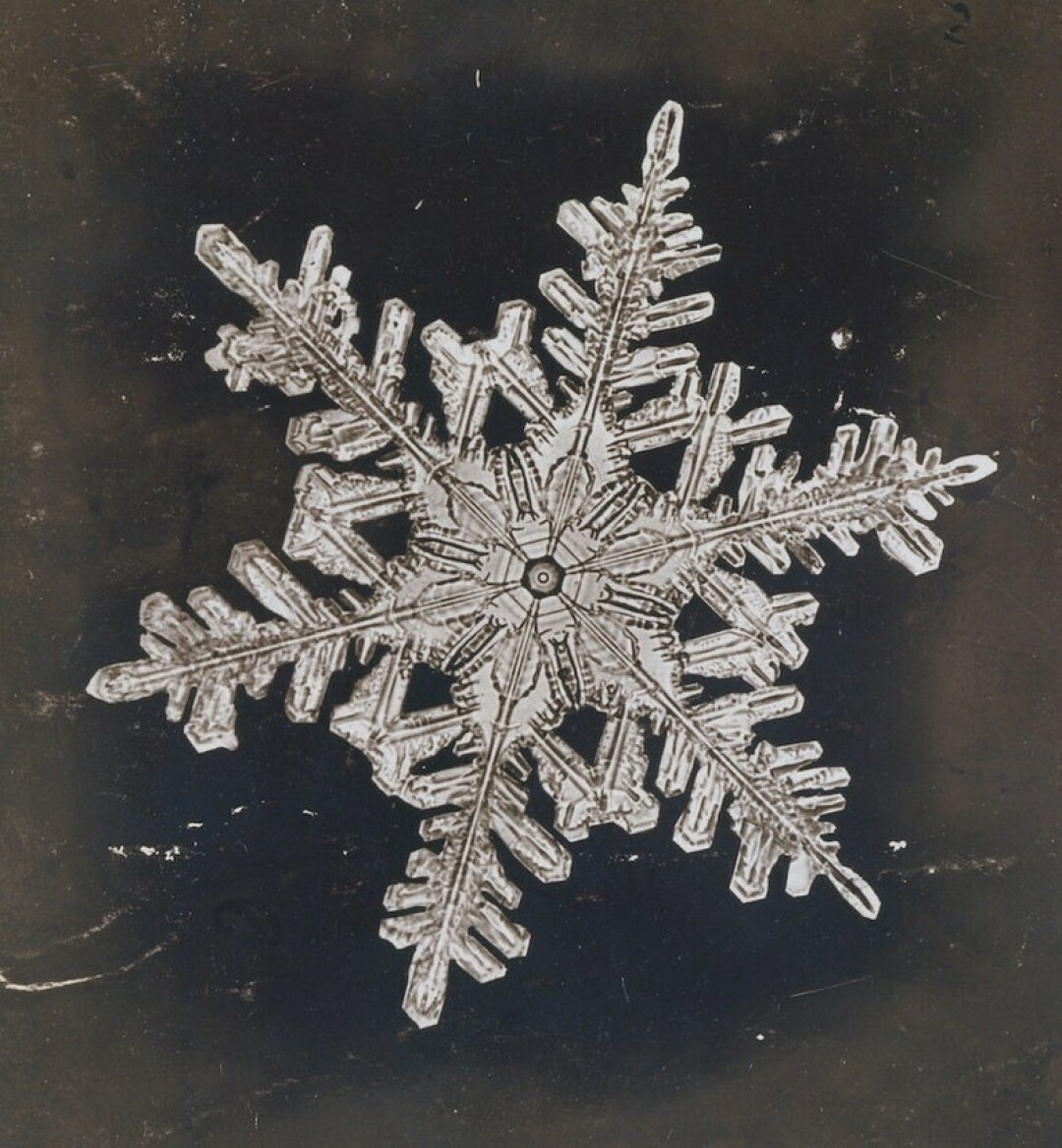 Even slight changes in temperature and humidity tip the balance back and forth between the growth of branches and flat surfaces. In this way, a complex pattern emerges.

Because each snowflake follows its own path through microclimates in the sky, each crystal is unique.

Because the six sides of a single snowflake experience almost the same conditions, they grow mostly symmetrically. (A snow crystal can also be called a snowflake, but once crystals bump into each other and get messy, they can only be called snowflakes.)

Although the “childhood” of a snowflake’s growth typically only last 30-45 minutes, the result can be spectacular. From a single ice nucleator and water vapor in the air, we get the spontaneous formation of mesmerizing patterns. From chaos arises order.

This is the quintessential example of something scientists call physical morphogenesis – the spontaneous creation of pattern and form by inanimate materials.

Of course, like kids of all species, some snowflakes generate chaos. A few end up as beautiful individuals, lauded for their perfection. Many more are scarred and broken. And a few fail to develop at all.

Each is important for creating the snowpack we value. Each is ephemeral, spending only a short time in a particular form on this Earth.

Gazing out of my window, I imagined myself as a snowflake: tossed through the clouds, experiencing new environments, and growing up wild.

Emily Stone is Naturalist/Education Director at the Cable Natural History Museum. Her award-winning second book, Natural Connections: Dreaming of an Elfin Skimmer, is now available to purchase at cablemuseum.org/books and at your local independent bookstore, too. For more than 50 years, the Cable Natural History Museum has served to connect you to the Northwoods. The Museum is now open with our exciting Mysteries of the Night exhibit. Follow us on Facebook, Instagram, YouTube, and cablemuseum.org to see what we are up to.