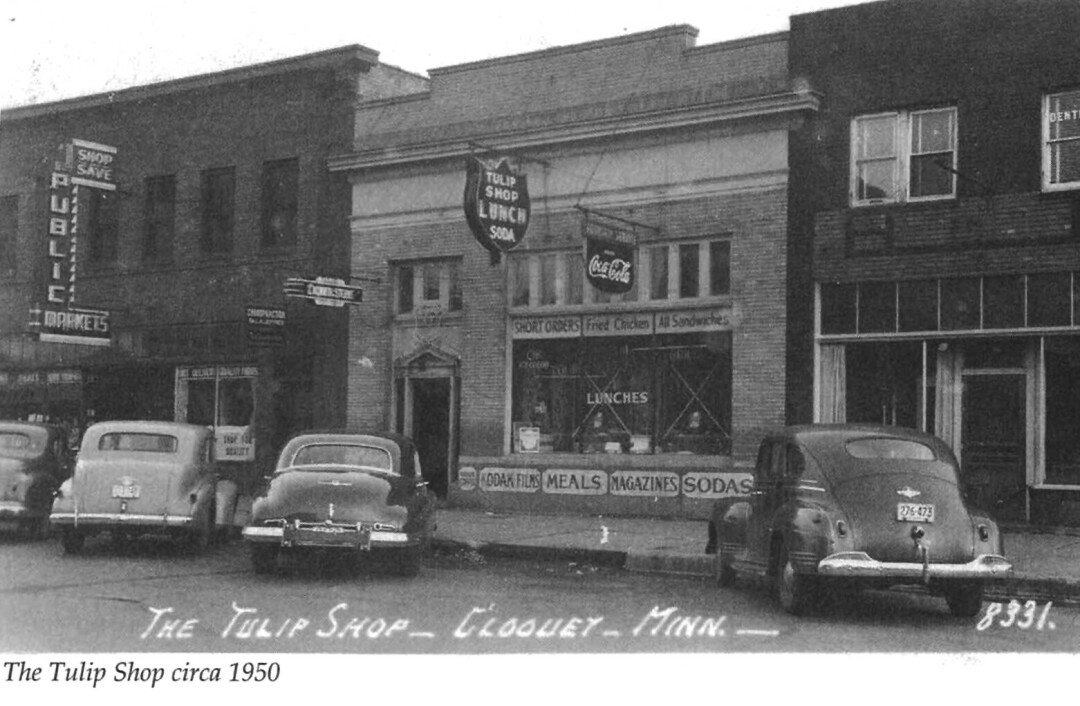 John Antioho was a Greek immigrant who owned the Tulip Shop on Cloquet Avenue. He told us that he was a wrestler when he first came over to America.

Wrestling was always a show biz sport, but this was before the fancy dress of wrestlers like Gorgeous George came on the scene, and wrestling became the principal offering of the new entertainment medium – television.

The Tulip shop had the biggest selection of magazines in town. It was, for a time, the Greyhound bus depot. There was a grill, although I don’t know how much it was used.

Their most popular sandwich was a Denver, which, if I remember right, was egg, ham and onion. I didn’t like onions, so I never ordered that.

I don’t recall ever eating a hamburg-er there, but I was told they would bounce if you dropped it on the table. We were told the same thing about Joe Huie’s hamburgers.

I did have a couple of those, but I never tried dropping them.

The Tulip Shop was the only place you could get Cherry Cokes. This was fountain Coke with a splash of cherry flavor, long before Coca Cola started offering it.

Seems to me we could also get a Lime Coke.

The only drawback was if John’s wife was present, we had to go outside to smoke, because she had a breathing problem.

On the corner, where the Cloquet Bar & Lounge is, was the Public Market. The Setterquists later relocated their store up to Carlton Avenue.

Across the street, where Pedro’s used to be, was the Solem Hotel and Cafe. West of the Solem was Kortie’s Hardware. Jack Kortie was a classmate of mine, and for a while was a neighbor. His father was part owner of the store, and they soon moved to a big house off Chestnut Street, in the West End. It was on a hill, and I didn’t envy him if he had to mow the lawn, which was near vertical.

Between 8th and 9th Streets, where Larson Commons is now, was the Jefferson Elementary school.

At the corner of 8th Street, where Pedro’s parking lot is now, was a big gas station. I can’t recall if the Cloquet Fire Department was still in the building which is now the Moose Lodge.

I know the Moose were in a two-story building in the West End business district in the 1950s.

The Cloquet Public Library was in the building now occupied by the His-torical Society. I remember going up to the second level with its glass floor. I always got a shock there, until I started carrying a metal pen, which I would touch the shelving with and discharge the static electricity.

Gibby’s bar, located at the end of 3rd St., was one of several neighborhood bars that existed then. They had a pet parakeet that flew freely around the bar, occasionally landing on a patron’s head.

Up Selmser from Hook’s was another bar no more than a block away. I don’t recall the name of that one.

There was a Sandy’s bar on Laurel, and at some point there was the original Lost Tavern, which was near the match mill. I can’t say I remember that one personally.

Up the Big Lake Road was the Limber Inn, which had a small grocery section off to one side. Continuing further up that road would get you to Curtis’s Tavern, which was noted for Anne Curtis’s big, greasy hamburgers.

There was a small gas station where the Frank Lloyd Wright station is now. This was before Highway 33 was a four lane.

The first business I remember in the West End was the Bamboo Inn, on the corner of Arch Street and Ave, C. My mother took me there once, to meet some relatives. We had lunch, but I couldn’t get a hot dog, which is what I really wanted.

In the 1950s, this site was Dr. Hanson’s office. I was told by someone who lived upstairs that Dr. Hanson could be heard singing at the top of his lungs at 3 am, catching up on his work.

Across Arch Street was Roderic’s Furniture, and in the building across Ave C which the Avenue C Restaurant briefly occupied was the Northwest Paper Co. main office. If I remember correctly, the mortuary was on the other corner.

The beginning of that block was the Cloquet Theater, which played the first-run shows. The Cloquet Theater was a step up from the LEB theater uptown, but it still couldn’t approach the splendor that was the Duluth Norshor.

Across from the theater was the Co-op’s West End store. The Co-op on 14th Street was bigger, but the West End store was fairly large, too.

Behind the mortuary on Arch was first a small cafe. It was bought by a couple of waitresses from Bern’s Lunch. They lived in the back, and if you got there for an early breakfast, you were liable to be served by the ladies wearing their robes and slippers. Talk about home cooking!

Next to the cafe was the Tru Value Store, where I worked for a time in my high school days. The store was run by another Kenny Johnson, and his father (who spent a lot of time there,) was Kent, but they called him Kenny, too, so it was a little confusing at times.

Kenny Jr. loved to chat, and sometimes he would get carried away. Every week, he had to bring his inventory order to the train depot in Carlton at a certain time.

It never failed, he would get involved in talking to someone at the last minute. He had a newish Frazer car, and at times we broke a few speed laws to get to Carlton on time. If he missed the train at Carlton, he had to drive like mad to catch it further down the line.

I think the VFW had a bar on Arch then, although in a much smaller building than at present. If I remember right, it was one room with a straight bar.

Across Arch was the City Hall. I forget when the new police and fire department was built, I know in earlier days, the police department was at the back of City Hall, with the jail cells on the second floor.

The building later went to Potlatch Corp for their main office. I’m not sure if that space was claimed by SAPPI when they took over.