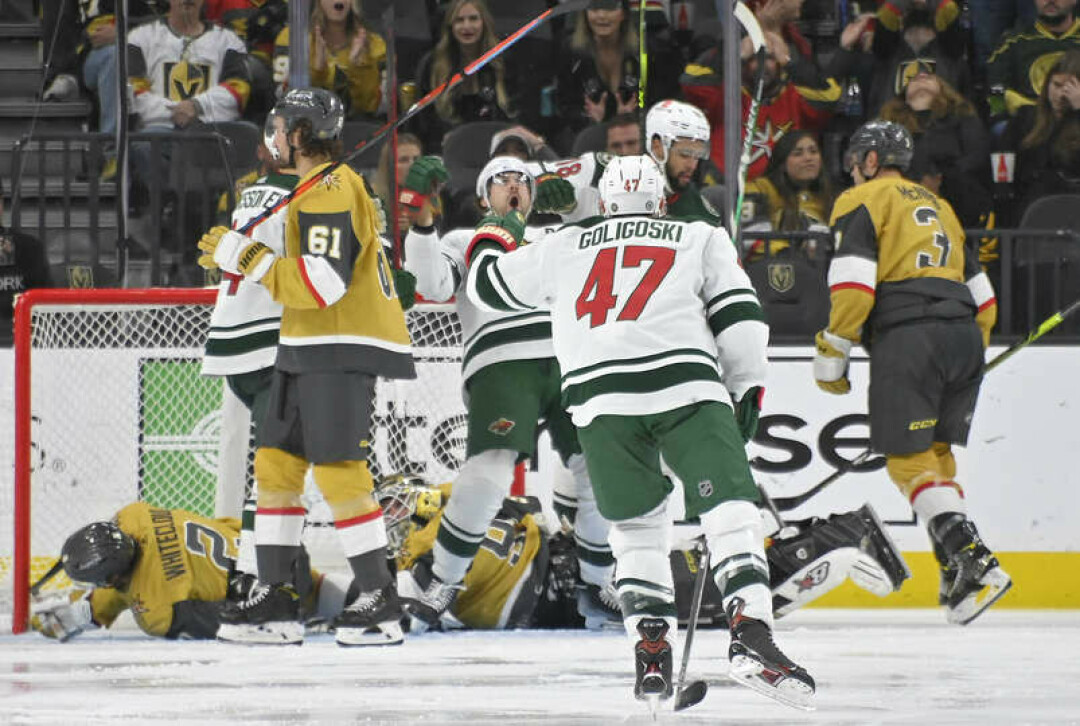 Marcus Foligno ties the game at 4 to 4 versus the Golden Knights in Vegas.

MINERAL CENTER – The Minnesota WILD just concluded their four-game Western road swing, taking the first two games and then dropping the last two. The trip was condensed into four games in six days.

I had been hoping for a three and one outcome on this trip, but all things considered, the two and two will have to be acceptable. And there is no time for rest before Tuesday night’s tilt versus the Carolina Hurricanes.

I believe the Canes are one of the best teams in the league but have experienced a recent downward trend after an impressive start. They have gone five and five in their L10.

Even so, the Wild are going to have to rest up quickly. They are coming into a challenging part of the schedule. But it has both positive and hard parts to it.

The team is coming home for six days. The CAR game will be a battle. Then perhaps less of a test against BUF, then a Saturday tilt versus an excellent FLA team, although the Cats are a mere 4-4-4 on the road. The club will then play @ DAL, then meet an improving DET team in St. Paul before finishing out the calendar year at The PEG to meet The Jets.

That’s six games in 19 days. The club will get some rest and much-needed practice to make some in-season adjustments to their game before meeting the St. Louis Blues in an epic NHL Winter Classic matchup at Target Field in Minneapolis on New Year’s Day.

The team put on a dominating performance (4-1) against EDM on the trip, and most people were looking for a very tough game there.

But EDM seems to have been bitten with netminding troubles. They are still top-heavy on offense at the expense of better defense and goaltending. (just my opinion)

The wheels came off against the LAK in a 2-1 loss. Of note was that the WILD were without Jonas Brodin on the blueline, and that would hurt any team.

No matter, the team didn’t look like they were matching the King’s energy.

This evening against the VGK was an engaging game. The first two periods and the early third frame were a see-saw affair. The VGK led at the second break 4-3. But then Marcus Foligno tied the game at 1:22 of the third.

At the 4:33 marker, the WILD’s Jordie Benn took a holding penalty, and nine seconds into the power play, the VGK scored to go back ahead.

The Wild chased the game the rest of the way. They played hard, but you could see their strength and energy levels weren’t matching by then, and Vegas held on for a 6-4 victory.

So, we got another reminder of how hard NHL road trips are. On some nights, even when you give it everything you can from a team perspective, you might not win. The logistics aren’t always in your favor. You can overcome that on some nights, and on others, you can’t.

The league is literally that close and competitive.

The team is second in GF/103 and 14th in GA/81. They are 21st on the PP/17.4% and are tied for 17th on the PK/81.0%. They are the 4th most penalized team in the league at 280 mins. Basically, the team can score, they are at the mid-league level in GA, and the special teams, while making minor improvements, still need a lot of work. The rest of December gives the team a great window to solidify their game and bank some points against teams they can win against. LETS GO WILD!

JUST A FEW DAYS ago, two Anaheim Ducks players excited the hockey world by uniquely scoring a goal.
Trevor Zegras had possession of the puck behind the opposing goal (BUF) flipped it over the net right in front of teammate Sonny Milano who promptly batted the puck in for an allowed goal.

Note the emphasis on the term “allowed.”

OK. Great. It was creative and a bit entertaining. There was a little bit of skill involved, and it has the hockey and non-hockey world buzzing about it. No one disputes the creativity involved or the ability to pull it off.

Most of the chatter about this seems to center on whether it should be a good goal or not and whether it’s “good for the game.”

I am compelled to also add to the debate the “LaCrosse” style goal, which has caused heated debates anytime a goal is scored using it. Most of the heat seems to be coming in the way some media folks are lashing out against the comments made by former coach turned commentator John Tortorella who clearly stated his disapproval of such a goal.

Torts is quoted as saying he thought it was a “tremendously skilled” goal. And then he asked a rhetorical question; is it good for the game?

Of course, his opinion was that it isn’t, and then the Torts haters came out en masse to pile on to the former Stanley Cup ring-wearing Coach.

Torts was referred to as a “dinosaur” and “prehistoric,” among other names. But this was what really caught my attention. It was in Yahoo Sports on their NHL page. The article was titled “Tortorella dislikes epic Ducks goal, fun.”

It went on to extol the virtues of kid players everywhere practicing this on their home rinks, post team practices, and so on, and how the youth players thought this was the coolest thing ever.

Some of the anti-Torts responses, articles, tweets, etc., were nauseating. Not only that, it was clear to me that the basis of some of these was just that the writers didn’t like Torts, not that they had some empirical data that proved these carnival type of practice goals were actually good for the game. They aren’t. Especially the LaCrosse type of goal.

Baseball doesn’t allow home runs to be hit any differently than they did 100 years ago. Football doesn’t allow sandlot “razzle-dazzle” type of rules, and hockey should stop this nonsense before it gets any traction in the game. Is there some skill involved? Without doubt. But in my book, it takes even more skill to be 20 feet out from a tender’ and pick a top-shelf corner from an angle than it does to scoop up a puck with your stick, carry it like you have a basket, and then dump it into a space the goalie isn’t covering. RESPECT our game. Leave the circus stuff on the practice rink. PEACE