Plante knocked out in Hawks’ victory 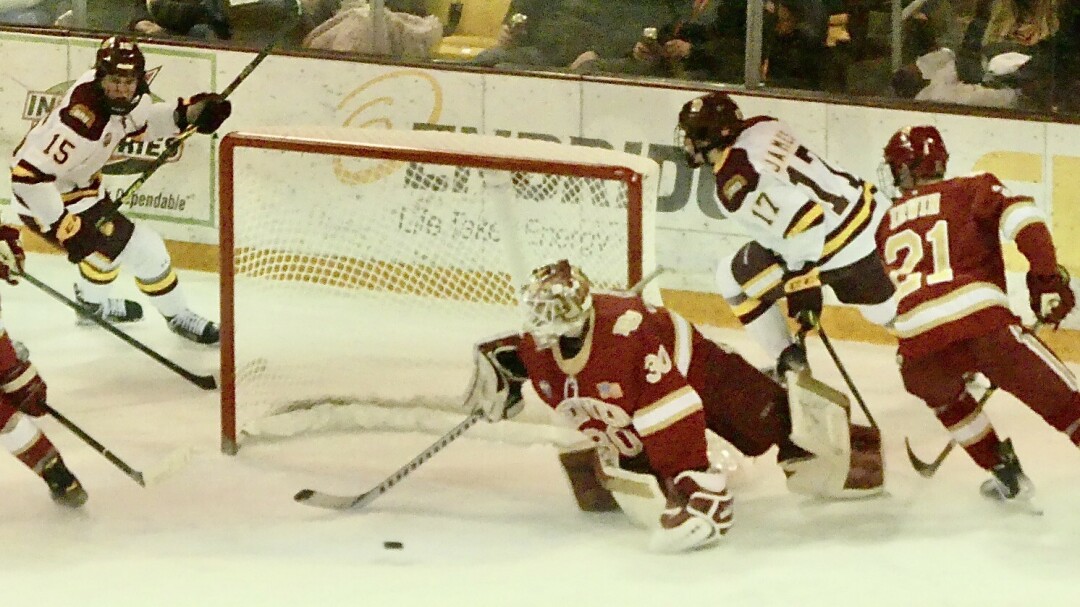 Goalie Magnus Chrona lunged to cover a rebound in his 5-0 shutout as UMD’s Quinn Olson (15) and Dominic James (17) raced past the net. Photos by John Gilbert.

There are knowledgeable hockey observers who believe the Hermantown Hawks are the best high school hockey team in Minnesota, regardless of Class A or AA, and the Hawks flexed their considerable power in their home opener last Saturday afternoon when they hammered Rosemount 6-3 before a near-capacity crowd.

Among those watching was Zam Plante, who should have been playing, not watching.

But Plante was on the Hermantown bench, wearing a helmet and wearing a sling on his right arm to protect a dislocated shoulder. He was run hard into the side boards at Wayzata on Friday night, as he pivoted away from a hard-charging Trojans player who blasted him in the back and plastered him into the boards.

The diagnosis is a dislocated shoulder, and his dad, former UMD and NHL star Derek Plante, said his oldest son would have an MRI next week.

“They got his shoulder back in and it seems tight, so we’ll just have to wait for the MRI,” said the elder Plante, now an assistant coach at UMD.

There was no penalty called on the play, which happened near the end of an impressive Hermantown victory.

The Hawks put on a show of depth and skill Saturday afternoon in their home opener, but we didn’t get to see Zam Plante play on a line with his sophomore brother Max.

Hermantown took a 2-1 lead from the first period, with George Peterson and Matt Kaupinen scoring and Jake Peterson scoring a power-play goal on Rosemount’s first shot, between them.

Carson Liebaert scored in the first minute of the second period, giving the Irish two goals on three shots.

Dominic Thomas and Dallas Vieau got goals to boost Hermantown to a 4-2 lead, but Rosemount got another goal short-handed from Hans Hedlund to cut it to 4-3 after two periods, while the Hawks had a 22-5 edge in shots.

Chase Sams and Beau Janzig scored in the third period for the 6-3 final. Hermantown outshot Rosemount 40-12.

The Hawks have a huge game Saturday, at Mahtomedi, which, like Hermantown, is a AA-caliber power playing single A. 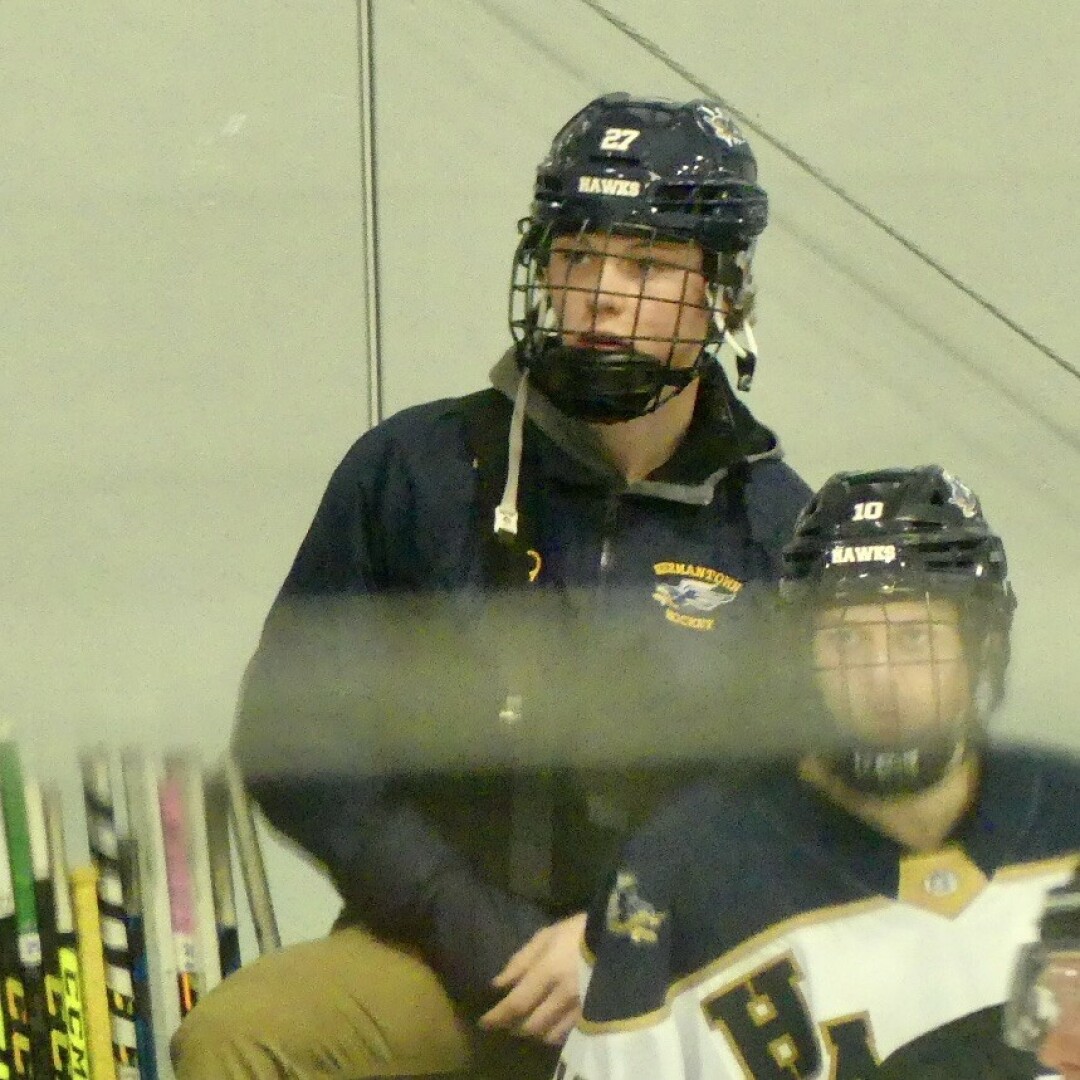 Hermantown junior standout Zam Plante had to watch from the bench against Rosemount after suffering a dislocated shoulder at Wayzata.

There may never be another Formula 1 finish like Sunday’s season-ending classic in Abu Dhabi.
Tied in points going into the race, defending seven-time champion Lewis Hamilton and Max Verstappen, the young Dutchman driving for Red Bull and seeking his first title, had a race to remember.
Max snatched the pole from Hamilton in the final minutes of qualifying, but Hamilton started like a pro drag racer and zapped Verstappen to take the lead.

As they sped away ahead of the pack, Verstappen cut inside and took the lead, but he only got about 90 percent past Hamilton going into a 90-degree left turn.

Verstappen, with the lead, went all the way across the track and Hamilton went off onto a safe runoff area on the right side, but stayed on the power and came back onto the track about 100 yards ahead.
Rules say you can’t go off the track and back on to improve your position, which is exactly what Hamilton did.

But after both had pitted, Hamilton’s Mercedes seemed to have the race well in hand as the two flew around the road-racing circuit. Both were on the hardest tire compound, and Verstappen’s crew signaled him to come in nearing the end to put on a set of new tires with the softest tread for maximum traction. He did, and came back out still second but behind a cluster of already lapped cars.

Nobody could have foreseen the twists of drama yet to come.

With nine laps to go, Nicholas Latifi suddenly lost control and spun off into the barrier on the right. The yellow flag came out, but it would take time to remove Latifi’s car.

Race officials, knowing Hamilton was solidly in charge but also that several lapped cars were between him and Verstappen, made an amazing call. They declared that all the lapped cars could pass the safety car and unlap themselves by circling the track.

That also brought Verstappen right up behind Hamilton. There were only two laps left when the safety car pulled off and the green flag fell.

Verstappen made his charge, and passed Hamilton, whose hard-compound tires had lost much of their grip. With one lap to go, Hamilton was close enough for one final bid, and he got up next to Verstappen, but Max had the line and pulled back in front.

They finished that way and Max Verstappen held on to beat Hamilton by 2.256 seconds to capture his first Formula 1 championship in a major triumph for Verstappen, the Red Bull team, and their amazing Honda engine.

The UMD men’s hockey team and the women, both split their weekend hockey series against formidable foes.

The men were mostly no-shows Friday, getting ripped 5-0 by Denver for the Bulldogs’ third loss in a row after the previous weekend’s sweep at Northern Michigan.

Magnus Chroma got the shutout, as the Pioneers pretty much outplayed the Bulldogs every shift, scoring twice in the first and three more in the second.

The next night, UMD turned the tables on the Pioneers, as Ryan Fanti returned to his top form in goal, and Jesse Jacques, Noah Cates and Kobe Roth scored first-period goals.

Cameron Wright made it 3-1 in the second, but Blake Biondi scored his eighth of the season at 1:19 of the third period for a 4-1 lead.

Denver got its second goal 16 seconds later, but Jacques scored his second of the game at 3:46 for a 5-2 cushion, bolstered when Roth hit an empty net with 3:28 remaining.

Meanwhile, down in Minneapolis, the UMD women fell behind 1-0 on a Gophers goal that was overturned when the officials noticed a Gopher forechecker flattened a UMD skater behind the net in a flagrant bit of interference that set up the opening goal.

So it stayed 1-0, although the Gophers scored later in the middle session. UMD, however, sprung a surprise by scoring, trading goals, and winning the game 3-2 with all three tallies in the third period.

The Bulldogs gave a run to getting a sweep, but the Gophers escaped with a 2-1 overtime victory to stay up in the WCHA’s “top three,” while UMD stays fourth.

The Bulldogs have played eight of the scheduled 12 games against the top three already, and while they are 3-5 in those games, they should have an easier second half for a stretch run.

Both teams don’t play in AMSOIL Arena again in 2021. The men are idle until a year-ending home-and-home set against MSU Mankato, with the teams meeting in Mankato on Dec. 30, and at AMSOIL Jan. 1 for a New Year’s Day special.

The UMD women are idle until the go to Harvard to face the Crimson in a pair of 1 pm games on Dec. 31 and Jan. 1.

Both UMD basketball teams, the 11-0 men and the women who have just gotten their act together, have games between now and the end of 2021 – but all their games are on the road, too. Good time to catch up on St. Scholastica, and some high school games.