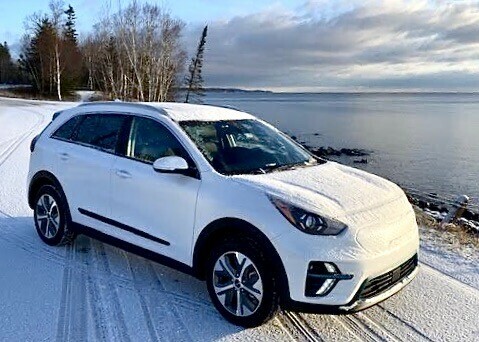 The new Toyota Sienna lights up the foreground with Duluth sunset as a backdrop. Photo by John Gilbert.

When Kia introduced the Niro a couple of years ago, I got a chance to drive one for a week and review it. The Niro was available in hybrid, plug-in hybrid, and electric – although the electric version was not out yet.

It was an impressive vehicle in every way, with the same powertrain options as its partner, Hyundai, had put into the Ioniq.

But this time, when I got a 2022 Niro to live with for a week, it was different. This time the vehicle delivery service in Chicago brought the Niro to me in an enclosed trailer, rather than driving it as they did with the first hybrid Niro.

This time, the prize showed up and  looked the part, in gleaming Snow White Pearl, and I couldn’t wait to drive it.

We’ve heard all the predictions and speculation about electric vehicles, and we all share the primary concern, called “range anxiety.”

No, we won’t be using an extremely long extension cord. EVs run on battery packs, and every battery company is racing to build better battery packs, with quicker charging and more power delivery to allow us to drive for far more distance than the short-distance range of the original electric cars.

Face it, we are going to be buying and driving electric cars instead of internal-combustion-engine cars sooner than later, and I am one of those convinced advocates that we’re going electric.

But I have some questions of my own.

Having driven a few electric vehicles – or EVs – I understand the efficiency of electric power means your maximum torque occurs at zero RPMs, so when you hit the gas, you virtually blast away in a flash. The Niro did exactly that.

My major question is what happens to all that sweet electric power when you have to park your EV outside in Duluth when the temperature is single-digit cold overnight?

It is similar to camera batteries, which, when it’s cold out, tend to go from fully charged to warning you the battery is drained in minutes.

Now I could find out firsthand, because this Niro was totally electric, although there is a small engine under the hood designed to supply emergency range-extension.

Rolling out of its trailer, the Niro showed 237 miles of range. That’s a lot, and is a tribute to the LG Chem company in South Korea, which has worked closely with Hyundai/Kia to develop the lithium-ion-polymer battery pack that is cutting edge on charging, range and power output.

The lithium-ion-polymer battery pack has 64 kWh (kilowatt-hours) of power, and drives a 150 kW electric motor that powers the front wheels, and it includes a 7.2 kW on-board charger.

The battery lies flat, under the rear seat, making the Niro handle even better than it should, because it’s front-wheel drive but has the weight balance of a mid-engine vehicle.

I drove down our hill and a short way up the North Shore of Lake Superior to shoot a few photos, and a bit more, just experimenting with the throttle and the silent potency.

When I got back in, I pushed the button, knowing the response would be silent, and looked for the “Ready” indication on the instrument cluster.

I was surprised to see that the range number had actually increased from when I left. I’m a strong believer that you slow down a good distance from your stop, and you descend hills knowing you can add regenerative electricity to the battery pack by braking lightly.

What I didn’t realize at first was that the paddle shifters affixed to the steering wheel were not just for up and downshifting the continuously variable transmission to a better range, but when you hit the left paddle to downshift, you also are activating extra regenerative operation, so when I instinctively downshifted with the left paddle coming down our big hill, I inadvertently added to the battery’s power.

We were thoroughly impressed with the comfort and feel of the Niro, and with the power and efficiency.

We don’t have a high-speed 480 outlet at home, although we would obtain one if we had an EV, so I plugged into normal household current overnight, from about 6 pm until 8 am the next morning.

The range told me I would have 213 miles of range, and I was going to drive to the Iron Range and back, so 213 miles should be sufficient.

You need to be aware though, that the battery pack delivers the equivalent of 123 miles per gallon in town, and 102 miles of highway driving, so cruising on a trip at 70 miles per hour will use up your electric energy faster than if you were just driving to work and back.

When I started my return trip, it showed I had 110 miles of range. Another neat little item on the information screen shows where the nearest high-speed charger is located with an arrow and distance. I learned there was such a charger in downtown Virginia, and I knew there were others in downtown Duluth and at UMD’s campus. I also knew I wasn’t that far from home, so I went for that.

As I drove up the hill toward our house, a little notification informed me I should be looking for a charge, because I only had 11 percent of my total remaining. No problem. But it was cold out, and I checked it a few times before plugging the self-contained cord into the front end receptacle and the other end into my household electricity.

That night, we were going to see a UMD-Ohio State women’s hockey game at AMSOIL Arena down by the harbor, and about four blocks from the arena there are parking meters, including high-speed charge stations. I pulled into one of those spots and activated the charger by plugging it into the front-end receptacle, and we walked to the game.

When we returned, it was chilly, with a nasty wind, but we got there promptly, and when I unplugged the cable, it notified me that I had only gotten a partial charge because you’re supposed to prepay with a credit card and I was unaware of that.

I go into the Niro and hit the starter button. Silence, but life. And the range number said I had 184 miles of range. Impressive, especially since I hadn’t called for a full charge.

Parking outside again, where the temperature went down to about 9 degrees overnight, the car showed 172 miles of range – not bad, considering we drove 10 miles home the night before and the frigid weather hadn’t nicked it for much more.

The next day, our final full day with the Niro, we got hit with a snowfall of about 7 inches up on our ridge, and it kept coming through the night. That gave us the full scope of what we might expect with an EV in Duluth winter, all in a nutshell.

The Niro handled driving in the snow adequately, although the Michelin tires mounted were more for long-wear and high mileage than winter traction, which is a tendency of all Michelins except the company’s all-out winter tires.

Interior comfort was excellent, with roomy bucket seats and rear bench covered with what Kia calls SynTex, which seems to be a tough but comfortable material. They are more comfortable when electrically heated, as the test vehicle’s seats were.

A sunroof with a shade, all the company’s many safety lane-keeping and fore and aft parking warnings are in place, and so is smart cruise-control with stop-and-go, and a Harmon Kardon audio system that was extra impressive because there was no engine sound to interfere with the satellite music.

The $44,650 price tag for the EX Premier model was increased to $47,080, by the addition – thank you very much – of a “Cold Weather Package,” consisting of a battery heater, a heat pump, plus a heated steering wheel.

You could get everything going with auto-start, but I kept thinking it would warm up quickly, being all-electric, and I didn’t want to bring the range down any more than necessary.

The week-long test was interesting, but seemed too short. I want more time with the Niro EV, and it would be fun to try the Niro Hybrid for comparison.

With the hybrid or plug-in hybrid, of course, the 1.6-liter 4-cylinder engine works to recharge the battery pack and eliminate all the range anxiety, as well as the intrigue of daily cold-weather testing.