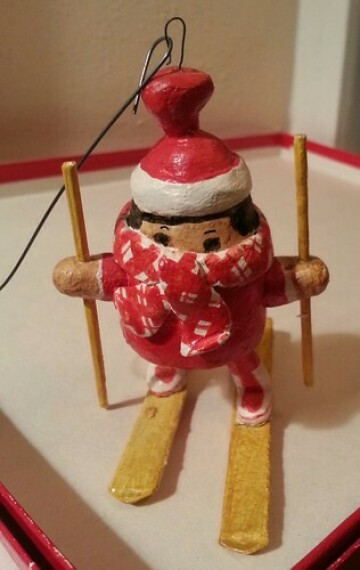 When I was in fourth grade my Mom offered to help my teacher, Mrs. Knight, teach my classmates how to make puppets out of papier mâché. She had been making Christmas doves, angels and carolers from papier mâché for years.

The several days she spent helping us form and paint heads that would attach to cloth bodies were the most memorable of the year.

It was a great improvement over learning long division, which only drove me to break pencils in frustration.

Someone made Mrs. Knight a puppet theater like those for a Punch and Judy show or Kookla, Fran and Ollie. We could hide behind it, lift our puppets up in front of its curtain and ad-lib puppet shows.

I discovered voices and invented conversations that made my classmates laugh far harder than the jokes I told. Theater proved to be as compelling as basking in the glory of the other student’s awe for my Mother’s project.

My mother had set her sights on becoming an artist from a very young age. As an eight-year-old she was crushed to discover that her father had covered up the calendar full of butterflies she had drawn for him under stacks of paper.

More distressing was finding the plaster skull that could hold pencils in its eye sockets prominently displayed on top of the pile of paper. This was her older sister’s art and the paper weight was still around when I was a kid. It was pretty cool.

Mom was pursuing an art degree when she got married but she set aside her ambition and became a diaper-changing, baby-boom mother instead.

Making puppets was not the work of an abstract artist but it was a rewarding placeholder. It would be 10 years before she returned to college to finish her art degree. It would take five more before she found another place holder to test her skills.

In 1971 a group of “faculty wives” from Mankato State decided to start a “consignment” store. It would sell locally made goods and split the profits with the makers of corn stalk dolls and cribbage boards.

They named their store “Harpies Bazaar,” riffing off of the woman’s magazine Harper’s Bazaar.

My Mother nearly burst her buttons when she was asked to join, until she deduced her invitation had more to do with being married to an attorney. He could draw up the store’s business documents much as another Harpy’s husband in the Accounting department could handle their financial records and taxes.

My first and only contribution to the store was to help take down an earlier store’s outdoor sign. Doing so unleashed 50 years of toxic sparrow’s nest dust.

The Harpies soon discovered my Mother’s many talents. She had decorated store display windows when I was little. She illustrated hundreds of ads, for which the Mankato Free Press won an advertising award.
In 1981, the year our first child was born, she returned to papier mâché. She made Christmas ornaments that sold like hotcakes. She signed them all “by George.”

They started simple but 13 years later they had become more fanciful, like the spindly-legged frog sitting on a cucumber that one of the Harpies’ children found in their garden.

It wasn’t painting, but my Mother was having a marvelous time. Harpies Bazaar was everyone’s favorite boutique in southern Minnesota. Rustic consignments gave way to the finest products the Harpies scouted out at huge merchandising conventions.

It was more a labor of love than a money-making proposition, although by Black Friday the Harpies could usually count on a modest profit.

My Mother enjoyed one benefit. Harpies could purchase anything in the store “at cost.” At Christmas my Mother always trooped her children to the closed store at night to pick out whatever they (we) wanted for a bargain-basement price.

From 1981 to 1994 each Christmas season brought all new designs. The only break was in 1987 when my Father died, and 1988 when Mom moved to St. Paul after enrolling in the Minnesota Academy of Art and Design.

She was ready to become a real artist. After her graduation she rented an artist’s loft and began painting abstract art so unlike her Christmas ornaments. Now she signed her canvases more soberly, “Georganne Welty.”

Other than a passing interest in political cartooning I never fancied being an artist but I always wanted to show Mom my school art work. I was so aggravated the windy day that Sherman took my portfolio and emptied it out on the school playground.

Thanks to my daughter, who once asked me to make a snow dinosaur, I followed my mother’s artistic inclinations.

My medium is more fleeting than sawdust and flour paste but, like my Mother, I too get a lot of friendly feedback at Christmas.