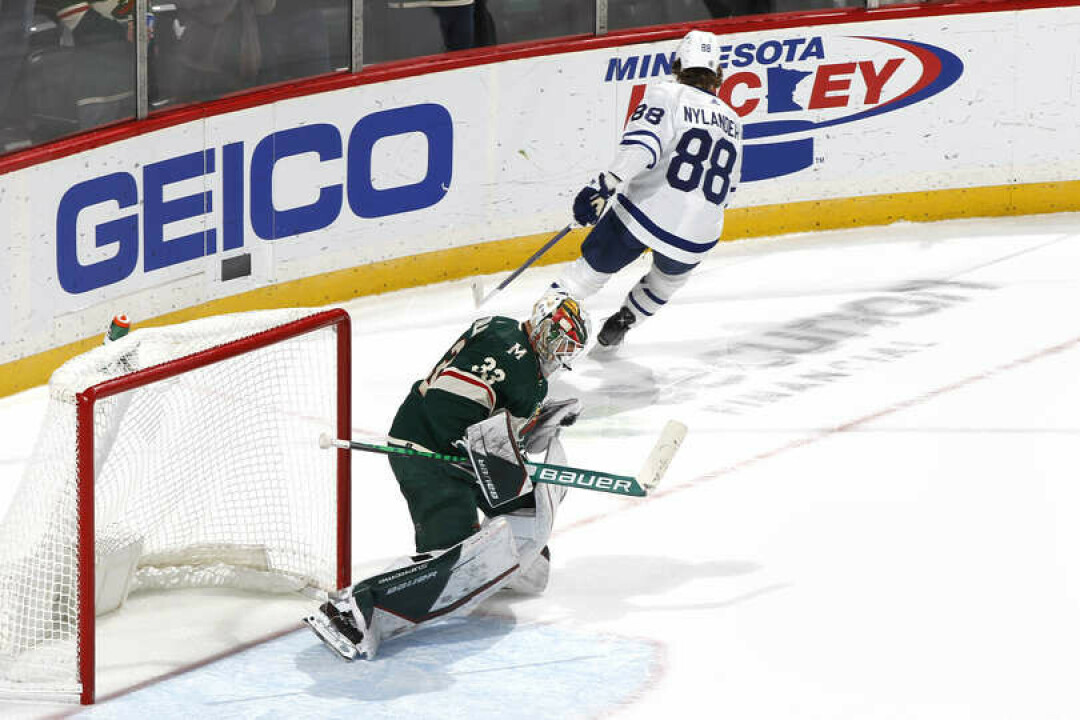 Wild netminder Cam Talbot celebrates a 4-3 SO win over Toronto in St. Paul.

BOWSTRING – It has been a jam-packed hockey weekend!

The NHL is rolling, collegiate hockey is heating up, high school and youth hockey are going full tilt, and I am loving every minute of it.

At least in these parts, the biggest story is that the Minnesota WILD is playing perhaps the best hockey ever seen by fans of this franchise and are currently on a six-game win streak after winning against the Toronto Maple Leafs last night in downtown St. Paul.

As you may know, this club has a significant portion of its fanbase that are faithful diehards, but there have been few rewards for being a fan beholden to the WILD. There have been some highlights along the road, but overall, following the Christmas Green and Iron Range Red clad team is a legitimate challenger of patience.

Even for me, I’ve followed them from the days the original ownership was formed and pursued a new franchise for the area until now. It’s a rarity for me to miss a game, and I take in every bit of info I can about the team and its players and staff.

I also can maintain a healthy perspective on the league and the team. It’s immensely entertaining if you love the game, and at the same time, it’s a business. I love the high spots and don’t get too down when things aren’t going well.

Overall, like all Minnesota sports, being a fan here is a test. A major test.

Right now is an exhilarating time to be a WILD fan.

Like many fans, I took a wait-and-see approach when Bill Guerin was brought in as the new GM and put his team together. I already saw this story before. And the endings were always the same.

But now, the buzz and optimism surrounding the team are unparalleled here. The team concluded a five-game home stand going 5-0 and are currently on a six-game win streak.

The homestand began with wins against Winnipeg and Tampa Bay. Those are two upper-level clubs in my book.

Then they faced Arizona and New Jersey, earning victories in each tilt. This led to last night’s game versus the Toronto Maple Leafs.

All eyes from within the hockey world were on this game. It was also featured on Hockey Night in Canada. The Leafs came in as winners of 15 of their previous 17 games.

And honestly, there were still some questions pertaining to the WILD being asked before the game. Are they for real? Can they keep winning and moving upward? Can they beat a Leaf’s team while so many questions about their special teams needed answers? Can they keep the Leaf’s talented scorers in check?

Outside of losing a three-goal lead just after the game’s mid-point, the team passed with flying colors in a 4-3 SO win. And who got the SO winner?

Dollar Bill Kirill Kaprizov of course. He did so with the most effortless appearing flick of the wrist I think I’ve ever seen on a SO shot.

Since I replayed it about 40 times, I think I was hypnotized by it or something.

Nonetheless, outside of coughing up a three-goal lead, I think this was the best game I’ve seen this season. Spectacular can’t cover it.

Consider that the Leafs have at least three “generational” level players, and then you’ll understand how big of a victory this was.

Few had the WILD coming out of this game victorious, while a couple of scribes speculated that this game could have been a Stanley Cup preview.

It’s too early to say that, though; there is a lot of hockey to be played before that event takes place. But don’t get me wrong, this was an epic week, topped off with a victory against a top team.

However, the WILD will continue to get tested. The team begins a four-game road trip against EDM on Tuesday night.

Yes, the team with probably the two most skilled scorers in the world right now, Leon Draisaitl and Connor McDavid, are one-two in league scoring. Alex Ovechkin is right behind them, but there is a nine-point dropoff after that.

Even Kaprizov, as talented as he is, is 10 points behind Ovi and 14 behind Draisaitl.

From there, they will be @ SJS, then @ LAK, finishing the trip @ the VGK. A four-win roadie would be top-notch, but 3-1 would be very acceptable.

The Oilers will face the WILD on a two-game losing streak. Injured D-man Jared Spurgeon will join the team on the trip. It’s getting interesting!

FORMER WILD HEAD COACH Bruce Boudreau has been brought on board by the Vancouver Canucks to coach the remainder of this season and the 2022-23 season. The Canucks “cleaned house” today, starting with the GM, Jim Benning, and the Head Coach, Travis Green. Other changes are “in the works” and will be announced in the next few days.

The first time I heard or knew anything about Boudreau, he was a player on the WHA Fighting Saints. He appeared in 30 games in the 1975-76 season, with 3G/6A/9 points. He appeared in 34 games for the Saints farm club, the Johnstown Jets (the Slapshot team inspiration), with 25G/35A/60 points.

He played between the NHL and mostly the AHL in the next 16 years and is a minor-league legend. Between the AHL and the CHL, he was more than a PPG scorer. But in the National, he was about half a PPG player.

Either way, I have always admired Bruce for everything he has done between playing and coaching. His pro coaching record is somewhat easy to define. He has always delivered in the regular season; the experts will tell you, while not doing so in the postseason. If you examine the data, that’s what you will find. You can’t hide it.

While I feel some of that phenom is in the roster construction of the clubs he coached, it just might be that he can’t coach a team “up” when the playoff chips are on the line. But, some teams are built for the playoffs, some not.

I’m still a Boudreau fan either way. In my book, he has been the ultimate hockey lifer.

Best wishes, Bruce, just not when you face the WILD!

IF YOU FOLLOW THE USA Women’s National team, you already know their training headquarters is in Blaine. And if you don’t know their pre-Olympic schedule, they will have five more tuneup games against TEAM Canada before all involved head for the Beijing Olympics.

On the 15th and 17th, the two teams will meet in St. Louis for a two-game set. Then on Dec. 20, they will meet in St. Paul at the Xcel Energy Center for a one-off contest. The “My Why” tour will end with two games in Alberta, Canada, in January. The series stands at 2-2.

Tickets for games in the states are available through the USA Hockey site, which will link you to Ticketmaster. You will see a link to Hockey Canada for tix to the Alberta games.
If you have the time, go and support these great athletes. I would love to see the X jam-packed for them!