Sports world is rich in memories 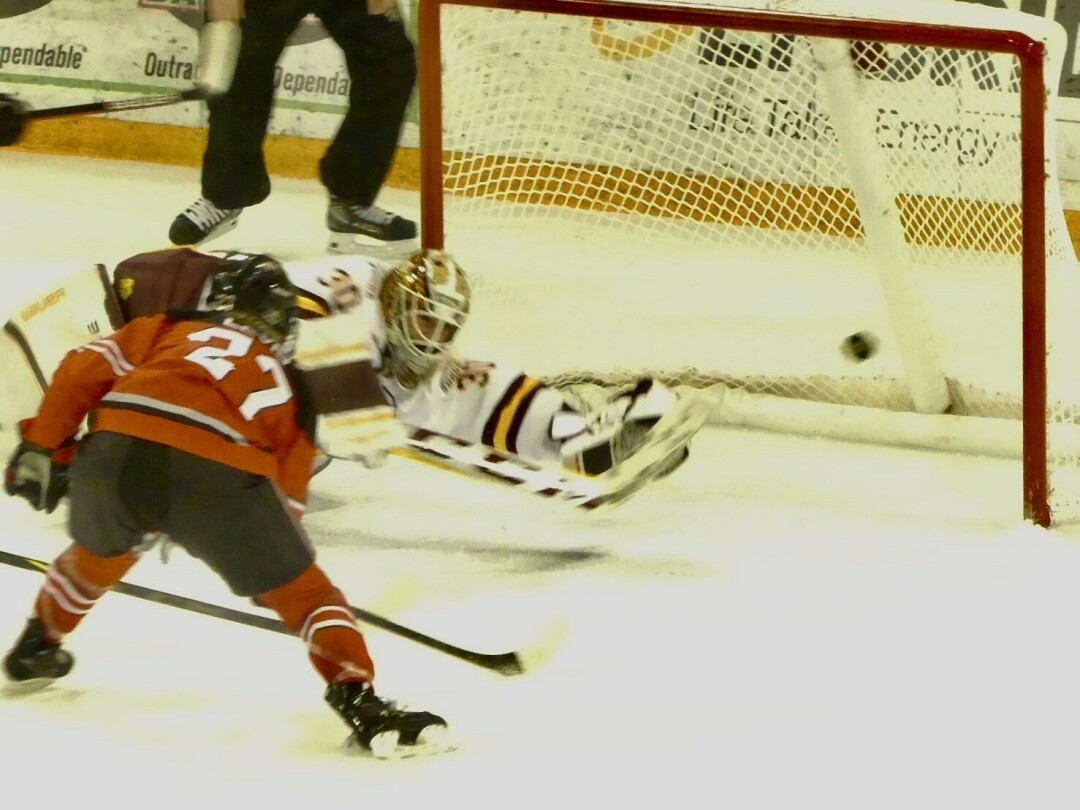 Paetyn Levis fired in a rebound for a 2-0 Ohio State lead en route to a 5-0 lead and 6-2 victory for a split against UMD Saturday. Photos by John Gilbert.

Bruce Johnson acknowledged that it was a long day of driving, from the Twin Cities to Virginia, for the ceremony to honor Dave Hendrickson, who died a week earlier at age 87.

“There aren’t many more left like Dave,” Johnson said.

That simple statement put everything in perfect perspective. Johnson, now retired after having built the Armstrong High School hockey program, didn’t have to explain further.

Dave Hendrickson is from another era, which seems to be vanishing, where iconic high school coaches stood tall in their communities for all they did to help direct young men toward good, honest and productive lives.

Maybe you have to be a certain age to recall and respect the job Dave Hendrickson did for decades of Virginia youths, but Bruce Johnson’s comment was right on.

My suggestion to a number of the hockey people gathered at Our Savior’s Lutheran Church for the service and at the Virginia Elks Club afterward, was that we need to come up with a format where we can all get together and talk hockey and memories, so that we don’t have to depend on funerals for the opportunity.

The sports world is rich in memories, both the ones from our distant past to those that happened just last weekend, and on to more that might happen this week or next. Think about your most vivid sports memory – was it from a high school game, college or maybe pro? Funny how the designation doesn’t matter as long as the memory is everlasting.

Last weekend, the UMD women’s hockey team faced Ohio State at AMSOIL Arena. The Buckeyes might be the best team in the country, but UMD rose up and stung them 5-2 on Friday night, jumping to a 3-0 first-period lead, which became 4-0 in the second period before allowing the Buckeyes a couple goals as reward for a 41-28 shot advantage.

Coach Maura Crowell dismissed that, saying, “They always shoot a lot. But we know Saturday games are always different from Friday games.” 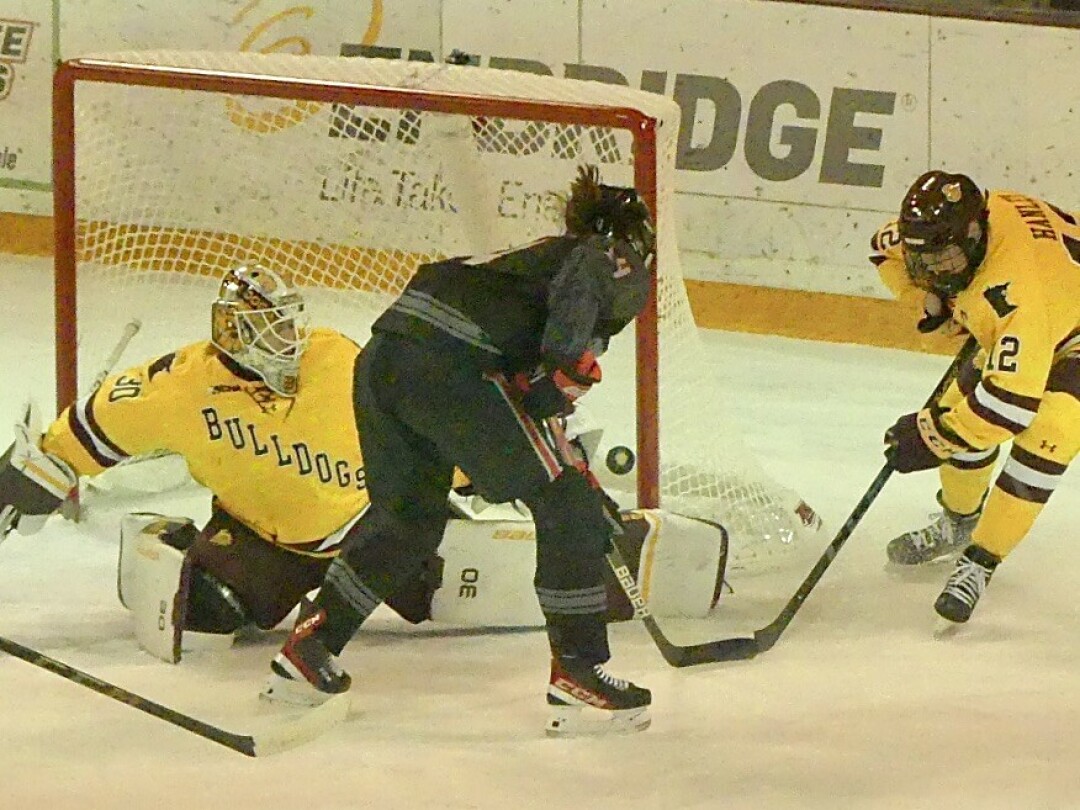 Ohio State’s Claire DeGeorge made a quick move and scored with a backhand on Emma Soderberg in Friday’s 5-2 UMD victory.

On Saturday, the Buckeyes outshot UMD 40-27 but it was the Buckeyes who jumped ahead – 2-0 in the first, 3-0 after two, and 5-0 before first line mates Elizabeth Giguere and Gabbie Hughes got late goals in a 6-2 shellacking.

Elsewhere in the WCHA, Minnesota went to Madison and inflicted a loss and a tie on the previously unbeaten Badgers, gaining the extra point for winning the second-game shootout as well.

The Gophers, stung by an early split at UMD, was beaten both games when Ohio State visited Ridder Arena – the place the Bulldogs visit this weekend.

The UMD men, meanwhile, went off to Marquette and were swept by Northern Michigan in a nonconference series that knocked the Bulldogs off the No. 1 pedestal. That slap upside the head might pay benefits if the Bulldogs get things back in order this weekend against Denver at AMSOIL.

Up on campus, the UMD men’s basketball team continued its impressive start, winning two Northern Sun games to continue undefeated, even though they made hard work out it before overcoming Minnesota-Crookston Saturday afternoon.

They’re home again this weekend, with the women’s basketball team that continues to solve a mysterious tendency to have one quarter of horrible shooting that has cost the Bulldogs several games.

There is another memory in the making up at Hermantown Arena at 3:15 p.m. Saturday. It will be the home-opener for this season’s Hermantown Hawks, who face Rosemount.

The Hawks got an early initiation to the season with two performances in the Twin Cities that did nothing to detract from my suggestion that Hermantown might be the best team in Minnesota, regardless of class.

The Hawks faced a powerful Benilde-St. Margaret’s team in their opener, and won 6-5 in overtime. Sam Plante, now a junior, scored two goals as Hermantown rallied from a 2-goal deficit, then Plante scored to complete his hat trick for the overtime winner.

That same night, Hill Murray beat Eden Prairie 4-1, by the way. Next day, Hermantown beat Hill-Murray 4-1, as Max Plante had a goal and an assist, and his younger brother, Max Plante, also got a goal.

They play together on a line with Kade Kohanski, and they’ve played together since Peewee days.

If you paid any attention at all to girls high school basketball last winter, you are aware that Gianna Kneepkens of Marshall broke all kinds of records for her fantastic play, including breaking the all-time girls high school single game record with 67 points in a state tournament game.

She is now a freshman at Utah, a team rich in skill and depth at guard. The Utes started off sizzling, and Kneepkens got some time in off the bench, scoring 15 in one game.

But last weekend, the Utes struggled against a potent Brigham Young team, and Kneepkens got a chance to play, a lot. She led the team with 25 minutes, and she also led the team with 29 points, while the second leading scorer had 10.

My guess is she has earned more playing time with that performance, so we’ll keep watching.

With the 2022 Winter Olympics coming up in February in China, we can look forward to NHL stars filling all the roster spots and making the headlines.

It will never be the same as it was in 1980, when Herb Brooks took his hand-picked group of college players and challenged the world at Lake Placid, N.Y. — following up an opening 2-2 tie against Sweden by winning all the rest of its games, including a spell-binding 4-3 shocker over the Soviet Union.

You want to talk memories? About two dozen of my greatest sports memories came while covering Team USA’s Miracle on Ice, and after saving all my notebooks, I wrote a book about all that went into Herb Brooks’s coaching that made him the best coach in hockey history. In the world.

I also wrote another book, Miracle in Lake Placid, to celebrate the 40th anniversary of the 1980 spectacle.

My Saturday will be busy, because I am going to be at the Bookstore at Fitger’s, signing copies of the more recent book – and both books, actually – from noon until 2 p.m. For $25, you get a signed book that settles all the questions and ingredients that went into that fantastic team, which will make a great Christmas gift for any family member or friend with any interest in hockey.

See you there, and we’ll be done just in time to make it to Hermantown to watch the most exciting team in high school hockey at 3:15, leaving time to still scramble to a UMD basketball game and/or the UMD-Denver hockey game at AMSOIL Arena. 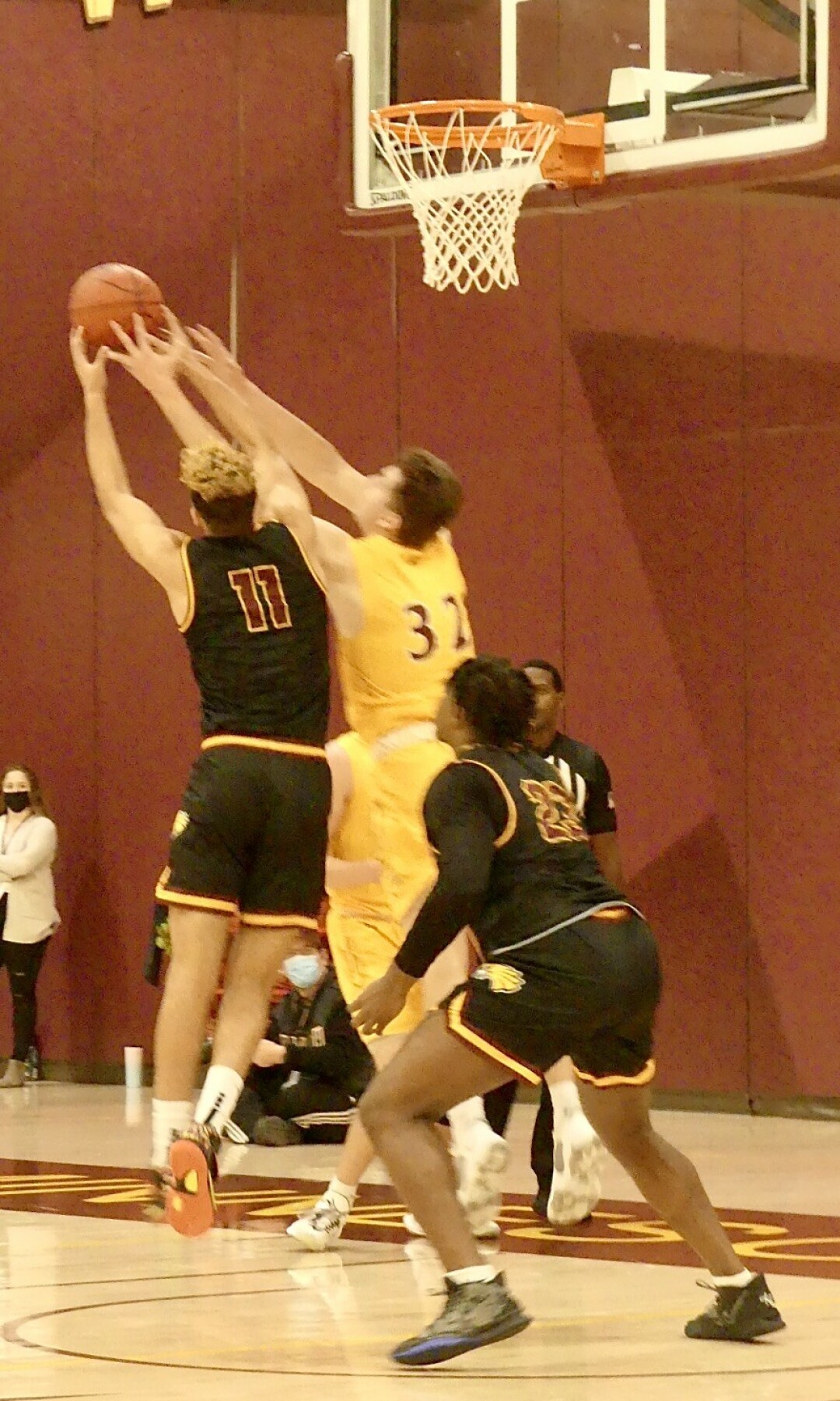 UMD’s Austin Andrews (32) battled for a rebound with Crookston’s Leonard Dixon in Saturday’s victory to remain undefeated at 9-0.