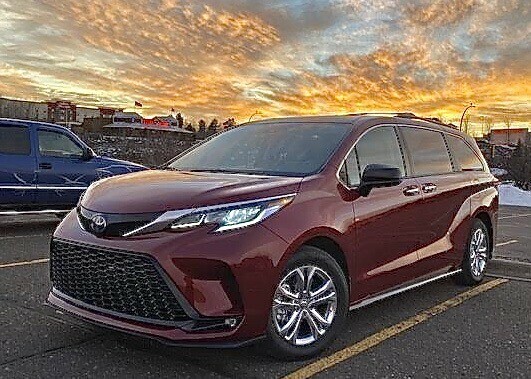 The new Toyota Sienna lights up the foreground with Duluth sunset as a backdrop. Photos by John Gilbert.

It has been challenging but fun, amid the flurry of SUVs on the market, to discuss and debate the benefits of minivans compared to SUVs.

My findings are that often minivans are the best family haulers because of their economy and versatility, and the wonderful competitiveness of the top of the line entries, where the new Kia Carnival might place at the top, compared to the very impressive Honda Odyssey, Chrysler Pacifica and Toyota Sienna.

So right about then, I get to spend a week in Duluth with the 2022 Toyota Sienna, which comes in one flavor – spectacular.

Every aspect of every vehicle is open to challenging competition these days, and minivans certainly aren’t exempt. The Sienna has been a solid contributor to Toyota’s worldwide wealth despite going 10 years before a makeover, which came for the 2021 model year.

It was a major change, with a new platform, body, powertrain and features.

For example, you want all-wheel drive? Check. The new Sienna XSE that I drove had electronically-wheel drive.

You want a hybrid? Check. The new 2022 Sienna XSE is the top of the line, but all Siennas come with your choice of powertrains – as long as your choice is a very efficient hybrid.

This particular hybrid includes a 2.5-liter 4-cyinder with two electric motors, combining to turn all four wheels and also direct 245 horsepower to the wheels.

Toyota is pretty synonymous with hybrids, of course, and this one works through a continuously variable automatic that works smoothly and efficiently at all times and facing whatever challenges you might find.

For me, it was scaling the steep avenues of Duluth, and the Sienna zipped up with ease, while still delivering the projected EPA mileage of 36.2 miles per gallon. The EPA estimate says 35 city, 36 highway, so we were a smidge more than that.

The look of the new Sienna steps up in class to be as flashy as the best minivans, particularly the test vehicle, which came in a stunning red exterior color called Ruby Flare Pearl, which is pretty expressive as names go. 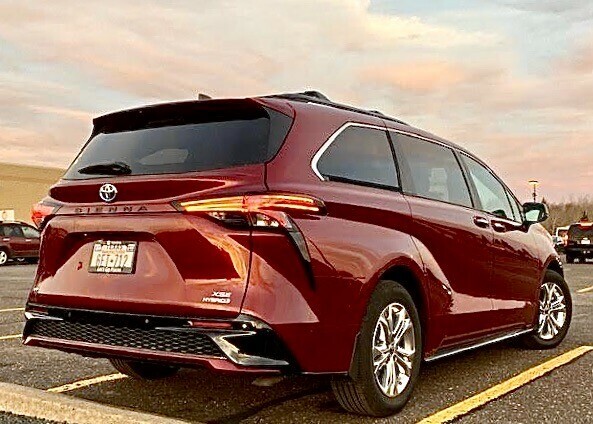 The stylish rear has adequate storage with seven passengers in place.

Toyota fans have been wondering what the company has up its sleeve, with so many challengers on the way to electric vehicles, and the promise that Toyota would be announcing some new directions toward EVs has been met with the leaked information this first week of December 2021, that reached Automotive News from, of all places, Beijing.

Yes, apparently Toyota is planning to work with an aggressive Chinese battery-maker BYD to create and launch a small electric vehicle that could revolutionize the EV business.

Toyota finally gave in and has started using Lithium-Ion battery packs, even in the Prius.

But the new BYD concept is described as lithium-ion-phosphate Blade batteries.

Even as Toyota is icing to develop its own solid-state lithium-ion cells for longer range and more efficient energy storage, BYD introduced its Blade battery in 2020 and the batteries, which are thinner and lighter than lithium-ion, do not use cobalt or nickel, yet are less prone to overheating and have a longer shelf-life.

Reportedly, Toyota had investigated a joint venture with BYD several years ago but did not go through with it. One of the issues is that Toyota has such rigid standards for testing and experimenting, while BYD seems to charge ahead and turn its experiments into real-world vehicles.

This time, the innovation has lured Toyota to the possibility of a joint venture to give Toyota the same technical advantages that Tesla already has attained; Tesla uses LFP batteries in its Model 3 and Model Y vehicles sold in China.

While that may be the most exciting news out of Toyota since the establishment of its Prius, the current state of Toyota vehicles – including the new Sienna – is at a high level throughout.

The interior of the Sienna XSE includes comfortable and supportive bucket seats in front and in the second row, where occupants have their own wireless headphones and connectivity, with 11.6-inch screens. 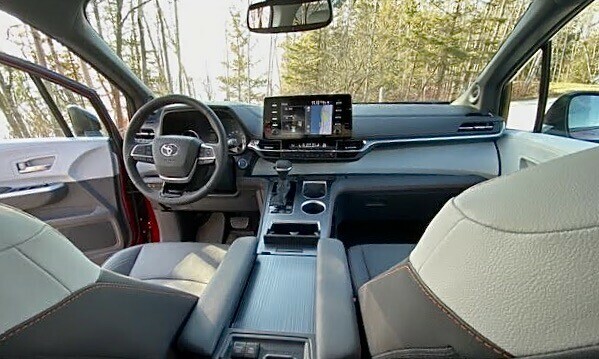 Looking ahead from the third row of seats in the 2022 Sienna.

The second row buckets are not removable, but stow low onto the floor, and they also slide over two feet fore and aft, creating easy access and more room in the third row.

The upgraded audio system consists of 12 JBL speakers plus an amplifier and subwoofer.

Driving the Sienna is more car-like than truck-like, or even minivan-like. The XSE package adds to the full complement of safety features by also installing a sport handling suspension. The lane-departure alerts are now bolstered by lane-tracing capability to keep you following the best trajectory around curves.

My personal style while driving any hybrid is to think ahead and slow down before needing to stop, to reclaim regenerative braking power that feeds the battery pack.

The Sienna also has a driving mode switch that allows you to choose a sport setting and also more economical or normal settings, and you also can click a switch that gives you dedicated electric power or focuses on the regenerative plan.

All of these features, of course, come at a cost. The Sienna starts at a base price of $42,860, but remember you’re getting all-wheel drive and the hybrid powertrain, and loading it up with the XSE luxury touches such as leather seats and upgraded interior, boosts the sticker to $47,942.

Also, remember that competition is fierce, and the Carnival, Odyssey and Pacifica are worthy choices for customers. But no minivan – or SUV family-hauler buyer – should overlook a test drive in the new Sienna.

Our test-drive beat the early December snowfall that hit Duluth, but knowing it has AWD, I want another chance!