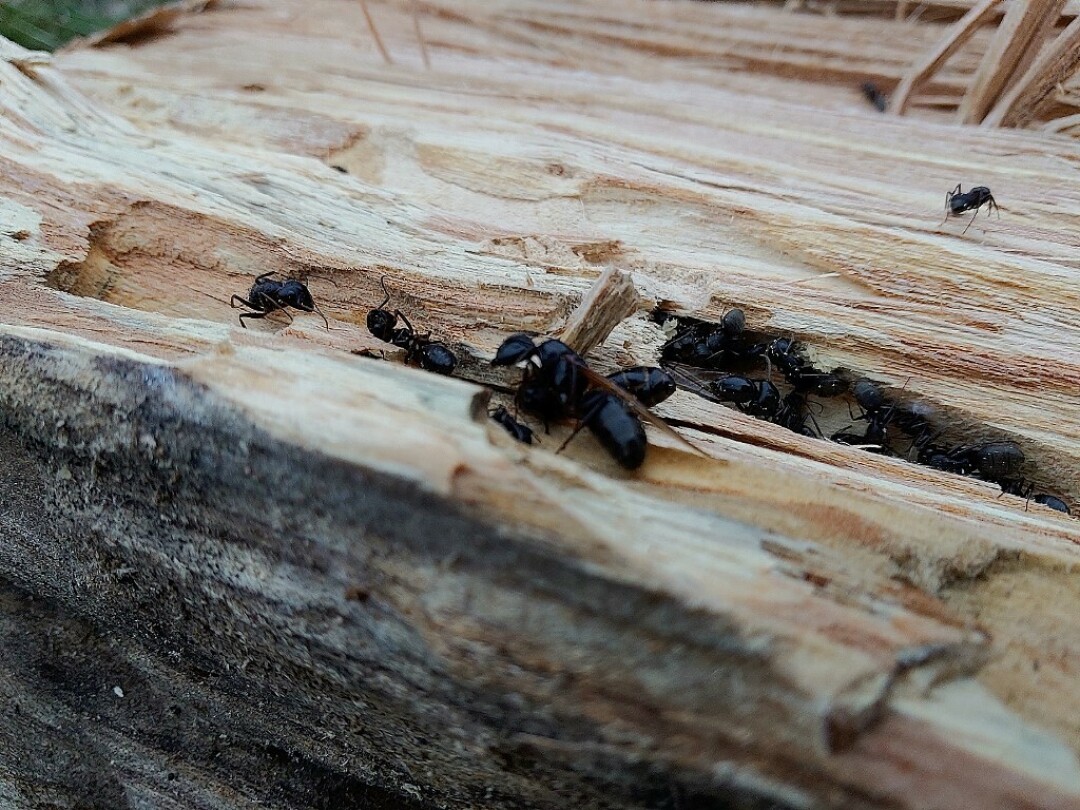 A large, winged queen carpenter ant sits near a gallery filled with her daughters, the work ants. They’ve all stored up fat and antifreeze and begun to snuggle in for the long winter. Photos by Emily Stone.

On dark winter mornings my dad gets up early and starts a fire to make sure the chill is gone by the time my mom joins him for breakfast. By mid-afternoon, sunshine beams in through their south-facing windows and the indoor temperature can easily reach 75 degrees without much help from the in-floor heat. Dad stokes the fire longer on cloudy days, sometimes with help from eager grandkids.

All of those cozy flames require a good supply of firewood.

So, minutes after arriving home for Thanksgiving, I found myself down by the old barn helping my dad start up the wood splitter. Always mindful of protecting people’s hearing, he handed me a set of earmuffs to match his own.

One by one, we hefted one-to-two-foot diameter rounds onto the platform, and I watched as he guided the splitter into the wood grain. Chunk after chunk peeled off and fell to the grass. I loaded my arms and carried them into the stack.

Having my young back at his disposal, Dad passed over the smaller logs (Mom could help with those later) and focused on some of the biggest rounds from low on the trunk or where a branch had diverged to form a Y. It was a red elm, he told me, much denser wood than the American elms he leaves standing dead for woodpecker habitat.

After we’d hoisted a particularly large chunk onto the splitter, I hovered nearby to catch half as it separated. With the slow force of the wedge, a section of tree opened like a book, and revealed another civilization.

Maybe that’s overly dramatic, but the intricate catacombs excavated by carpenter ants were quite impressive. I lowered the split log to the ground and examined it more closely. Several cavities were packed full of shiny black bodies, and as I disturbed them, unique individuals emerged. First was a large ant with wings. A queen, I surmised. Carpenter ant colonies can have more than one queen, although they aren’t friendly with each other.

The other odd individual was smaller than most, but also had a pair of long, shimmering wings extending beyond his abdomen. This was probably a male. Drone ants only come into the picture when the colony is ready to reproduce. They hatch from unfertilized eggs, mate with a new queen from another colony, and die. The observation has been made that they don’t have a father—only the queen bestows her genetic information on them—but they do have a grandfather, because the queen was born from a fertilized egg.

But Wikipedia reports that nuptial flights—when drones mate with new queens so that they can go start new colonies—happen when it’s warm and humid. That’s not how I’d describe November in Iowa. So why would there be guys hanging around the colony? 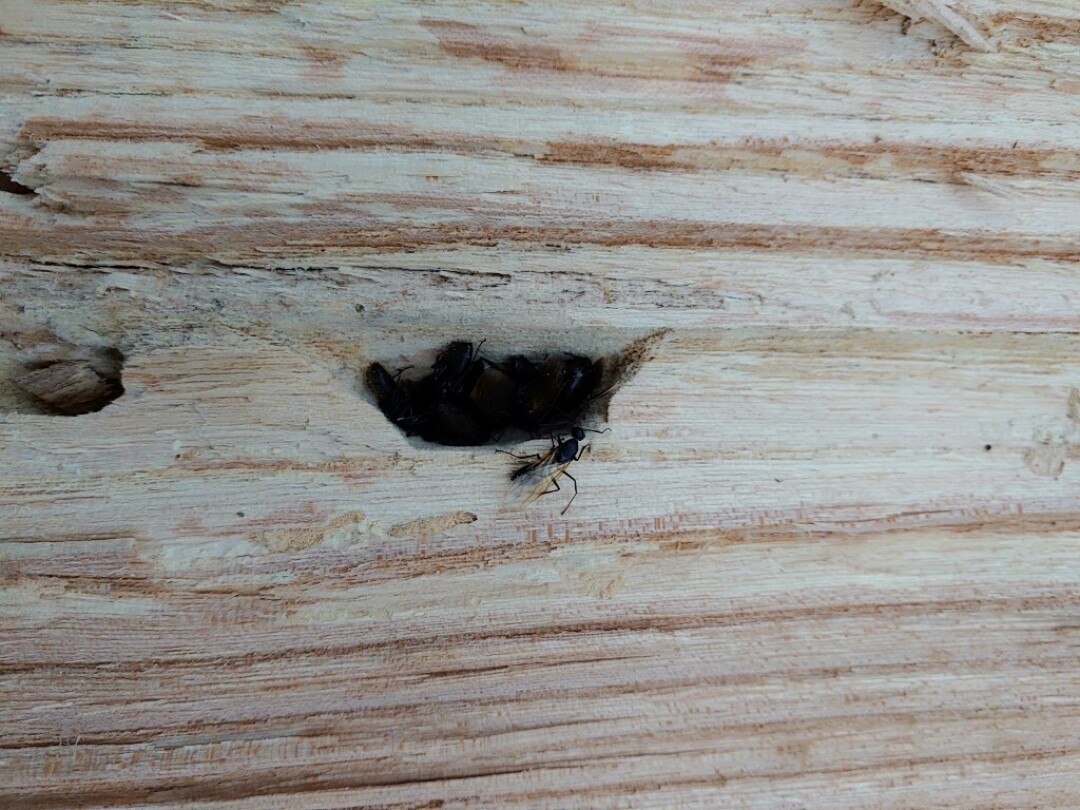 This smaller, winged carpenter ant is probably a male drone.

And why didn’t I see any clusters of small, white eggs? As it turns out, carpenter ants build both primary nests and satellite nests. Primary nests host the queens and the eggs, and require high humidity so the eggs don’t dry out. Older larvae, pupae, and worker ants can handle life in the drier satellite nests.

Both kinds of nests are excavated into dead or dying trees. Carpenter ants don’t eat the wood, but they do chew their way through the soft, wide parts of growth rings formed during rapid spring growth. The denser “late wood” is left for the walls. Tunnels between the rings allow for easy movement, and add to the lacy quality of the galleries.

The ants’ work is important to decomposition in the forest. Not only is their waste sawdust easily returned to the soil, their galleries multiply the surface area available to things like fungi and bacteria who actually can digest the wood.

If wood isn’t part of their diet, though, what is? A colony’s foragers will often head out at night in search of insects—either living or dead. They’ll extract the insects’ bodily juices and bring that nutrition back to the colony, leaving the exoskeleton behind. Some species also join the “farming” of aphids for their honeydew. As aphids slurp plant juices, they excrete excess sugar water. In return for this soft drink, ants ward off aphid-eaters like ladybugs. Bacteria in the ants’ guts may help them synthesize additional amino acids.

In preparation for winter diapause, ants achieve up to 50% bodyfat and increase their glycerol content as antifreeze. They also huddle together in their galleries. All of these habits make them a favorite food of pileated woodpeckers, who are quite willing to chisel their way through pretty solid wood in order to access these fatty, sugary, concentrated treats.

By fueling the birds’ metabolisms, the ants themselves are just as important to winter warmth in the wild as the logs they live in are to the cozy fires of people.

Emily’s award-winning second book, Natural Connections: Dreaming of an Elfin Skimmer, is now available to purchase at www.cablemuseum.org/books and at your local independent bookstore, too.