Alien and its precursor – It! Terror From Beyond Space 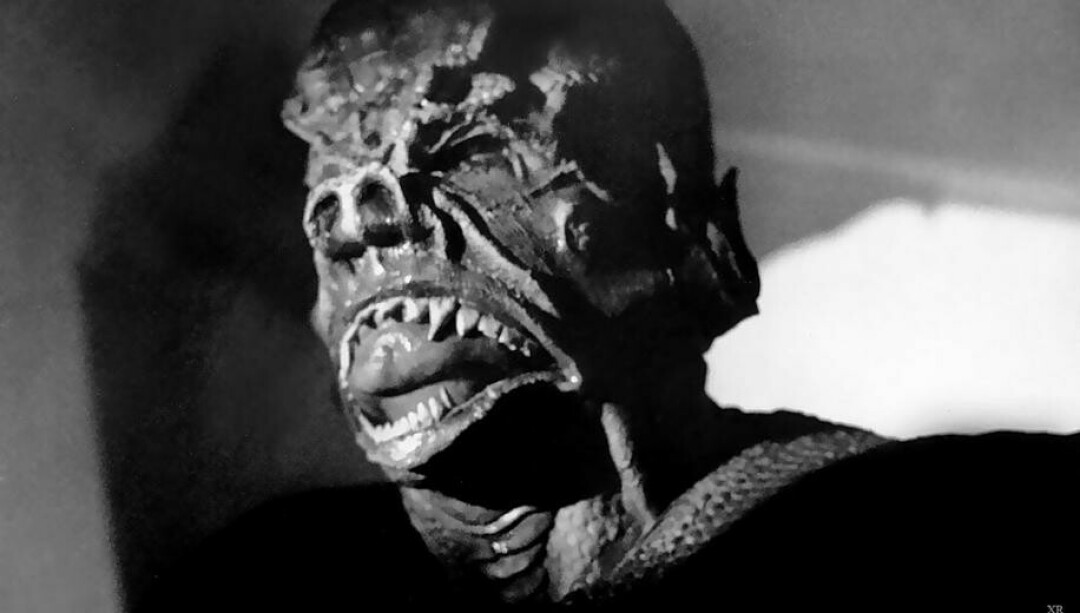 That’s Ray “Crash” Corrigan’s chin sticking out of the mouth of the alien beast in It! Terror from Beyond Space.

An old pal o’ mine asked me to house sit, mainly so I could shove anti-epileptic pills down his cat Roscoe’s throat twice a day. But while there I had access to his Direct TV and all that it encompasses.

I also brought my Amazon Firestick so I could do some streaming, but old pal o’mine’s wife mentioned they had access to all the movie channels.

“Maybe there will be something you haven’t seen,” she presciently said.

Ho, ho. What a bonanza! That Saturday night on TCM was a 1950s sci-fi flick I have been pining to see – It! Terror from Beyond Space.

Because it was directed by low-budget maestro Edward L. Cahn, I didn’t want to have to buy it to see it.

It’s a 1958 outer space movie that takes place in the future of 1973 (boy, they were really optimistic about how fast we would advance back in the 1950s) – a ship coming back from Mars is coming back with an alien that has a taste for human flesh.

And as a special bonus, TCM followed it with Ridley Scott’s 1979 Alien, which really is just an elevation of Cahn’s ultra-low budget B picture to A-picture status.

It! begins with a rescue mission in progress, with the second crew ever to land on Mars. Their mission is to arrest Col. Edward Carruthers – solemnly played by Marshall Thompson – the only survivor of a 10-person team sent to Mars, and return him to Earth to face a firing squad for murdering his nine colleagues. He claims innocence and says his colleagues were killed by an alien on Mars.

We join the crew as they are lifting off from Mars with Carruthers in custody, when a crew member notices a hatch has been left open, and another crew member admits he left it open after throwing out garbage. Typical American, even on Mars. That’s exactly how the alien gets onto the craft headed back to Earth.

It takes the deaths of several crew members for anyone to admit to Carruthers that they were wrong about him, and that, yes, there must be a bloodsucking alien that destroyed his colleagues and is now killing them.

Yes, it’s cheesy, but it’s also big fun. Yes, you must majorly suspend disbelief, but it’s worth it. Outer space and the rocket ship may be the most childish in the history of film. In fact, Georges Melies did a better rocket in 1902 when he made A Trip to the Moon.

The monster is a lug (former athlete/actor/stuntman Ray “Crash” Corrigan) in a bad rubber suit, so bad that it’s often shown only in shadow, which is always a bad sign for a monster.

Corrigan was often seen in movies in gorilla costumes. He was hired to play the alien in this, but refused to travel to costume-maker Paul Blaisdell’s house for fittings, hence if you look closely you can see Corrigan’s granite-like chin poking out of the monster’s mouth. Blaisdell told everyone it was the alien’s tongue. 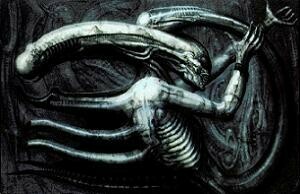 Director Cahn got his start at Universal Pictures in 1917, and went on to direct the Our Gang series from 1939 to 1943, as well as other shorts and a slew of Bs. In the 1940s he concentrated mostly on B crime and film noir. By 1955 he was doing sci-fi such as Creature With the Atom Brain, Zombies of Mora Tau, Invasion of the Saucer Men and in 1958 two of his films were marketed as a drive-in double feature – It! Terror from Beyond Space and Curse of the Faceless Man.

Once the crew is convinced that an alien is aboard and picking them off one by one, they attack and learn that bullets, hand grenades and gasses have no effect on the heavy-breathing monster.

That heavy breathing leads to the answer to the alien’s demise. Despite its cheapness, there is no doubt that this movie was the inspiration for Alien.

The movie still looks great, with much reliance on film noir lighting of the seven-member crew and their claustrophobic environment. Where It! looked cheesy, Alien set the bar for aliens. Swiss surrealist H. R. Giger designed the creature.

The story begins with a blue collar cargo ship that picks up a signal that requires them to check it out or face losing their shares of the cargo they are carrying. While two of the crew members board the alien ship, Warrant Officer Ripley (Sigourney Weaver in her first lead role) discovers the SOS signal is really a warning, but it’s already too late because one of the crew members has already been infected by the face-sucking alien.

It had been years since I’d seen Alien, and because of that I was remembering spoofs and rip-offs because I sat there waiting for the bloody penis dentata to burst from Hurt’s chest while sitting with his mates at the table, but it doesn’t happen that way. He first writhes around, and then a couple of colleagues grab him, throw him down on the table, and then the penis dentata monsters erupts from his chest.