Maybe the WILD are better than I thought 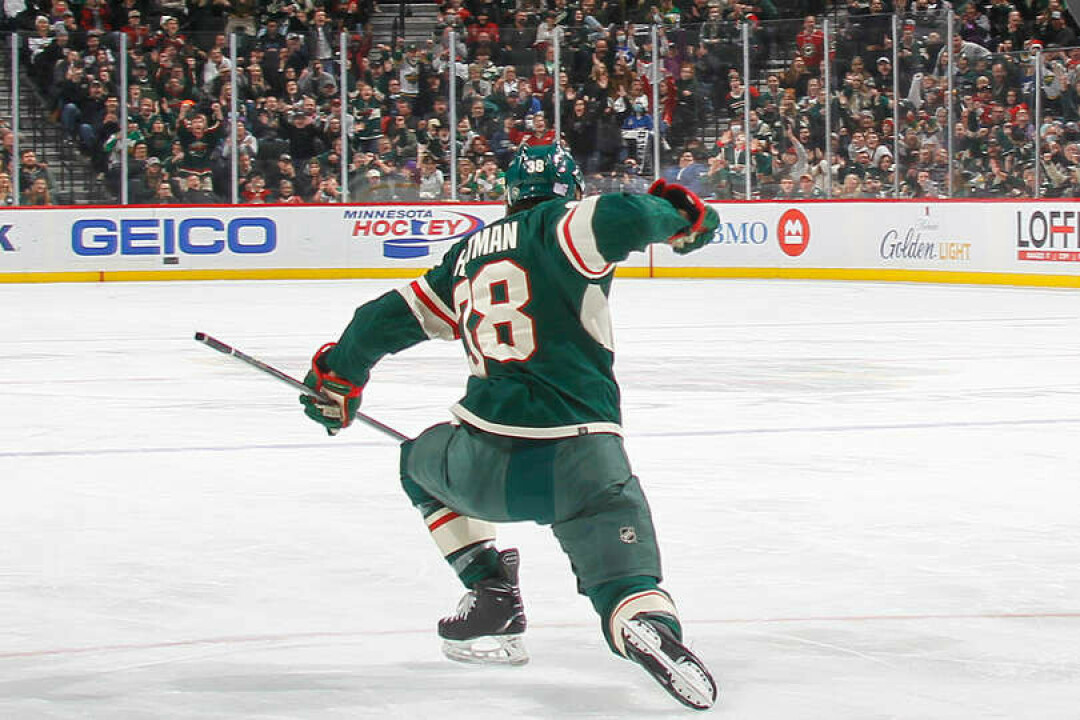 WILD forward Ryan Hartman gets the GWG against the Lightning in Sundays 4-2 win.

WAKEMUP – As a keen observer of just about all things WILD, I have watched this season unfold with some skepticism, but with a lot of joy, too.
As a longtime fan of the club, like from the start, I must be honest when I say the team has confounded us more often than not, and the successes have been far and few between.
That’s just the reality of following this club. I had also opined, quite recently at that, that the WILD most likely weren’t ready to lay claim to a Stanley Cup title just yet.
Well, that feeling hasn’t changed a great deal, but in watching the past handful of games, I had to conclude that they indeed are one of the upper-level teams in the NHL.
I had some concerns before their recent road trip out east. The club took on the two Florida teams, the defending SC champ and the other, the favorite of several analysts, to win it this year, along with a much improved NJD team.
The team went 1-1-1 for 3 of 6 points. They played from behind the entire game against FLA before losing 5-4. They did so again versus Tampa but did manage to tie the game twice, the last of which got them a shot at OT before eventually dropping the game in the SO.
Versus the NJD, they had two leads, but the Devils tied the contest with a little more than a minute left to send the game to extra time. The OT yielded nothing but the WILD came through on a Kevin Fiala SO goal to secure the win and two points in a 3-2 road victory.
Netminder Cam Talbot played the FLA and NJD games while Kaapo Kahkonen played the TBL game.
The team returned in the morning hours of Thanksgiving Day and had the day off.
On Friday, the team had a matinee game against our northern neighbors from Winnipeg and put on a solid performance in a dominating 7-1 win. I’m unsure if we can read anything into the win against the Jets though, they are 2-5 in their last seven tilts.
But wouldn’t you know it, on the last game of a string of roadies, the Jets went into Calgary last night, one of the hottest teams going right now, and beat them 4-2 in their barn.
This afternoon the WILD had another matinee tilt against the Lightning, earning a 4-2 victory with a strong effort against the Bolts.
Tampa hasn’t won in St. Paul in 10 years now and came in on an eight-game losing streak against the WILD on their ice.
For the coming week, the club plays ARI at home Tuesday eve. It will be the backend of a back-to-back for the Coyotes. They play at The Peg on Monday night.
Then the team faces the NJD on Thursday night before the mighty Maple Leafs come to The State of Hockey for an epic Saturday night matchup.
The WILD could have a strong week before heading back out on the road for a four-game western swing. They will face EDM, SJS, the LAK and the VGK on this trip. And no, it doesn’t ever get any easier.
So, the last two games have been impressive, and there is little doubt about that. If I were to reassess my thoughts about the overall fortunes of the team at this point, would they be different from my recent reviews about them?
Yes, a little bit. They are still strong offensively, they still need to tighten up defensively, and they still need some significant improvement on their special teams.
Is this club ready to enter into the top hierarchy of NHL teams, though?
WILD data; The ATHLETIC, projected for a 105 point season, a 2nd place division finish, and a 7% chance at a SC win. The SAGARIN; ranked 9th on a 13-7 record (thru 11/27) 0-3 vs. top ten (before TBL game), and 4-4 vs. top 16 with a 15th ranked schedule difficulty. NHL; 1st in the Central on a 14-6-1 record for 29 points. The team is playing at a .690 pace with 78/GF and 64/GA. They are 7-2 @ H, 7-4-1 @ A, are 2-1 in the SO, and are 6-3-1 in their L10. They are 24th on the PP/15.2% and 17th on the PK/80.8%. They stand at 28th in PIM’s/214 minutes.

If I’m analyzing where the WILD stands right now relative to “tiers,” I’d have to say that they have made their way to the top eight.
Does that mean they are ready to challenge for a Cup? I think not, but on the other hand, it’s too early in the season to make any guesses related to that.
Aside from the statistical data, I look for some other factors too. A couple of my most important criteria are the head coach and the #1 goalie.
My book’s top eight clubs right now are WAS, CAR, FLA, TOR, EDM, NYR, CAL and the WILD.
The best coach of those eight clubs is easily Calgary’s Daryl Sutter. The WILD’s Dean Evason isn’t far behind but doesn’t have Sutter’s body of work as an HC.
The team with the best goalie in that group is likely the Panthers Sergei Bobrovsky.
Then there are the considerations of team offense and defense, special teams, injuries and the like.
I believe this is the year the WILD can not only get a playoff spot but win at least a round or two. It isn’t inconceivable.
But there is a lot of the regular season to complete before the playoffs begin, and a lot can happen between now and then. And perhaps the current WILD roster will not be the same by the season’s end, post-trade deadline.
The club has been the subject of a few trade rumors in the past three weeks. I trust that GM Bill Guerin has the team’s pulse and will carefully consider any moves before acting.
The #1 rumor involves moving forward Kevin Fiala. My guess, though, is that if a forward is going to be moved, it would likely be Jordan Greenway. He seems to be working hard enough but has no offensive production of note. In 16 games, he has 0G, 3A for 3 points. And he appears to still require a lot of prodding to go out and enforce his will physically upon the team’s opposition.

This is baffling because, at 6’6” and 231 lbs., he is the biggest player on the roster.
He might be expendable because it’s believed that Matt Boldy, currently on the Iowa WILD roster, is ready to make the leap to the show. He isn’t as imposing as Greenway by any means but would probably be more of an offensive contributor than Greenway has been.
Could Greenway benefit from some “fresh” scenery? That’s up to him. I haven’t seen a lot of guys his size that are seemingly reluctant to play a physical style.
It is the hardest part of the game; make no mistake. But with his size, he could dominate games at will if he wanted. He, along with the team, has a decision to make. Let’s GO WILD! PEACE