Bulldogs scratch, claw way to No. 1 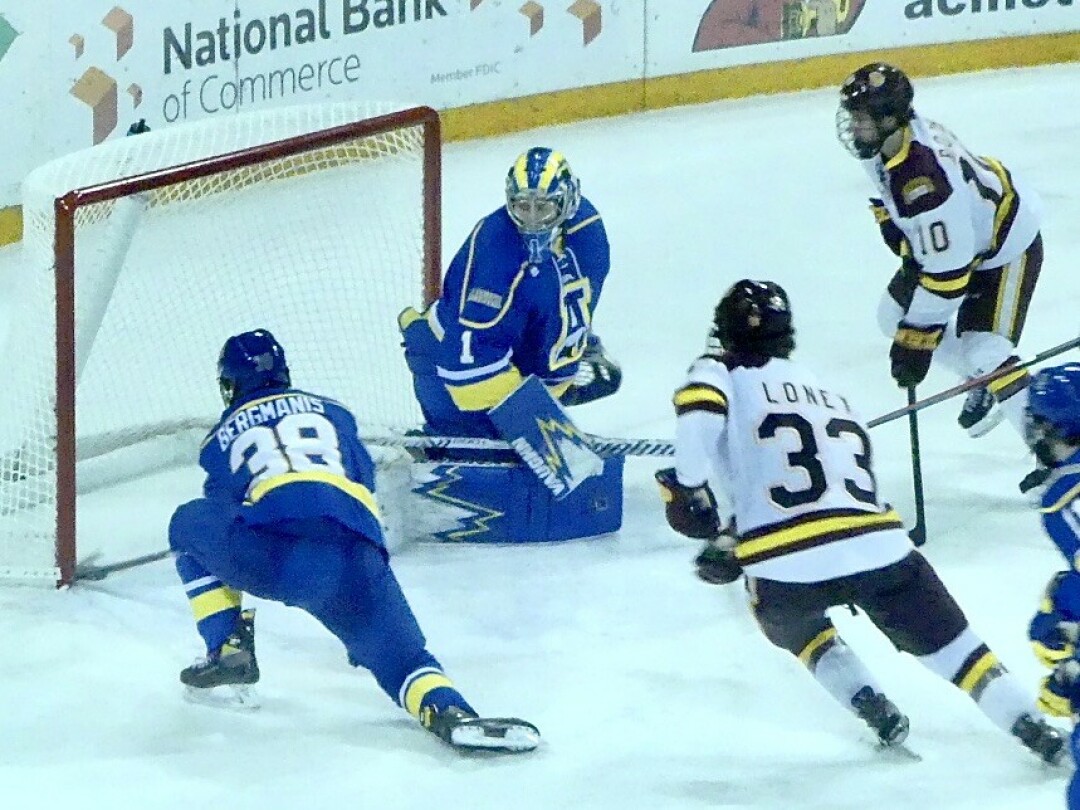 Alaska defenseman Arvila Bergmanis (38) gets his stick on the puck to clear it before it totally crosses goal line in 0-0 game, won by UMD 1-0 in overtime. Photos by John Gilbert.

The UMD men’s hockey team might best be described as the least chaotic team in what has been a chaotic start to the college hockey season.
As a reward for sweeping a non conference series from Alaska last weekend, the Bulldogs have climbed to the top – the No. 1 ranking in the USCHO national poll.
It’s an intriguing achievement, but is followed up this weekend by a serious challenge at Northern Michigan in another nonconfernce series with national Pairwise overtones.
UMD got outstanding goaltending from Ryan Fanti again, in both a 5-1 Friday victory at AMSOIL Arena, and an amazing 1-0 overtime victory over the Nanooks in a much more competitive rematch on Saturday, where the final three minutes had more drama than the whole rest of the series.
Look at the top 10: 1. UMD, 2. MSU-Mankato, 3. Michigan, 4. Quinnipiac, 5. St. Cloud State, 6. Western Michigan, 7. North Dakota, 8. Notre Dame, 9. Cornell, 10 Omaha. Of interest in Minnesota, No. 11 is Minnesota, and No. 12 is Denver – which gives the NCHC six of the top 12.
Also, look back at the season-opening tournament at AMSOIL, when Michigan beat both UMD and Mankato and looked close to unbeatable. Then Western Michigan went into Ann Arbor and swept two from the Wolverines the next weekend. Now, UMD, Mankato and Michigan are 1-2-3 in a different order than that first weekend.

In the first game, Alaska proved a quick and dangerous foe for the first two periods, with goals by Carter Loney in the first and Noah Cates in the second gave UMD a 2-1 lead. But Kobe Roth, Blake Biondi and Ben Almquist came up with third-period goals and UMD won 5-1.
The second game was a 0-0 chess match, through three periods, including the third, when UMD had a 15-4 edge in shots.
UMD was the beneficiary of a too many men call on the Nanooks at 18:28 of the third period, and at 19:35, the Bulldogs stormed the crease and the puck got nudged across the line.
Or did it?
Alaska goaltender Daniel Allin had no chance, but defenseman Arvils Bergmanis made a diving lunge into the crease and swept the puck out, as it wa crossing the line. The big scoreboard screen dared to show a top-down view of the puck trickling across the line, but even the most ardent UMD fan had to admit there was no ice showing between the goal line and the puck, so the officials declared it not gone completely over the line before Bergmanis made his game-saving play.

Twenty-four seconds remained, and the teams played it out to a 0-0 conclusion, leading to a 3-on-3 overtime.
Except, the penalty means it’s 4-on-3, so UMD opened the 5-minute overtime on a power play.
In the first minute of overtime, the Bulldogs pressed, and Koby Bender got possession in the slot and fired. The puck found its way into the net, and UMD had a 1-0 victory at 0:28 of overtime – meaning the penalty had expired at the exact second the goal went in.
The goal was awarded to Bender, and the superficial system at AMSOIL meant he also was named outstanding star of the game.
A few minutes later, the goal was changed, because Bender’s shot hit captain Noah Cates on the knee and ricocheted in. So Cates got the winning goal, but Bender was still able to escape with the player of the game award for a game that ended 1-0 on a power-play goal – or was it even-strength?
Meanwhile, an ironic twist has occurred with UMD desperately needing to bolster its non-conference ledger but instead losing 3-2 to unranked Penn State in the big women’s tournament in Washington, D.C., last Friday, before rallying desperately from a 3-1 deficit to beat St. Lawrence 4-3 in overtime on Saturday.

The local media just sort of overlooked the accompanying facts that Ohio State, from the WCHA, was also in that tournament and whipped St. Lawrence 5-2 Friday and Penn State 4-2 on Friday to claim the tournament title. 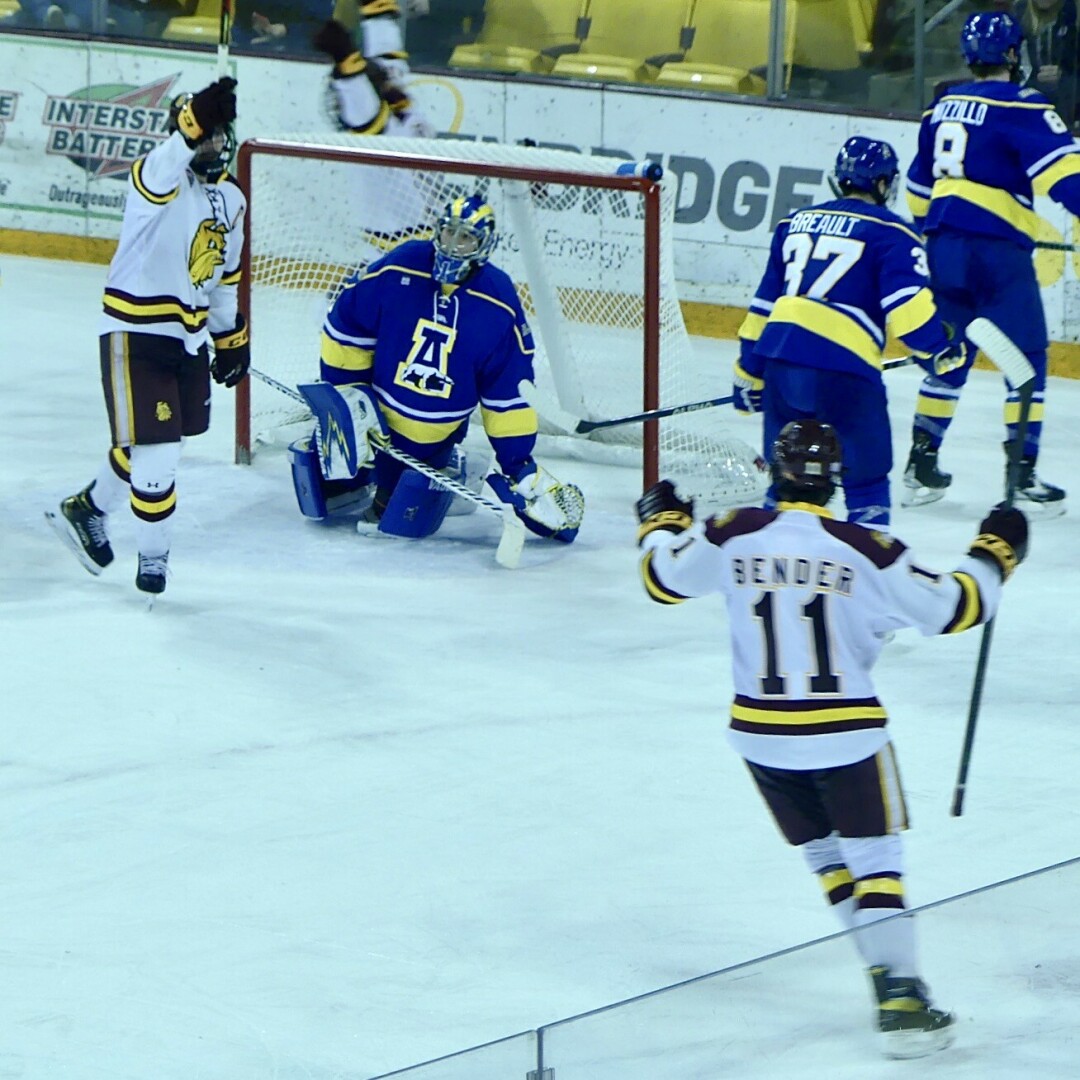 UMD’s winning OT goal came when Koby Bender (11) shot and the puck bounced in off the knee of Noah Cates, in front, for 1-0 victory.

This week, while the men are off to Marquette, Mich., the UMD when come home to AMSOIL Arena to face – guess who? – Ohio State at 6 pm Friday and 3 pm Saturday.
The ironic part of the whole thing is that UMD Coach Maura Crowell has been an outspoken advocate of expanding the women’s tournament and helping push the NCAA to increase the number of teams involved from eight to 11.
After last weekend, UMD dropped into a tie for 9th-10th in the USCHO ratings, although the victory was Crowell’s 200th as a head coach.
The women’s national ratings are: 1. Wisconsin, 2. Ohio State, 3. Northeastern, 4. Quinnipiac, 5. Minnesota, 6. Colgate, 7. Yale, 8. Clarkson, and 9-10 (tie) Minnesota and Harvard.
That means the Bulldogs had better find a way to beat Ohio State – which opened the season by going to Minnesota and sweeping two games from the Gophers 4-2, 4-1 – or else UMD could find itself outside the magic 11.
Sticking with UMD, we turn to basketball, where the men were picked to be about in the middle of the Northern Sun, and the women were projected as the top team in the conference. So what happens?
The men started off 7-0 and looking tough against everybody, while the women pulled off a rather bleak douoble at home last weekend.
The two games were similar, in that UMD looked very good in spots, and fell apart in other stretches – mainly the fourth quarter.
The Bulldogs lost 60-54 to St. Cloud State after an 18-8 drubbing in the fourth quarter, while making a paltry 3 of 11 field goal tries for 27.3 percent shooting after connecting for 50, 58.3 and 41.7 percent in the first three quarters. That left the Bulldogs hitting 44.7 for the game, while the Huskies hit 50 percent in the first and fourth quarters.

Nikki Kilboten scored 24 and Brehna Evans 15 for St. Cloud, while old reliable Brooke Olson led UMD with 22. She was contained with only two points in the first quarter but got 10 in the second for a 12-point half.
When UMD saw its 51-48 lead dissipate and turn into a 54-51 deficit, Olson hit a 3 from the right side to tie the game 54-all with 1:45 remaining.
But the Bulldogs stayed stuck on 54 while the Huskies pulled ahead, and then away by hitting four crucial free throws in the last 18 seconds for the 60-54 final.
On Saturday afternoon, UMD went out of the conference to welcome Northern Michigan to Romano Gym, and the Bulldogs’ hospitality was beyond the call of duty, or reason.
The Wildcats put UMD’s offense into a deep freeze for the second half and won 68-67.
A look at the shooting percentages told volumes: By quarters UMD outshot Northern 54.5 percent to 46.7; then Northern had the edge 40-25 percent in the second quarter, 60 percent to 28.5 in the third, and 55.6 to a meager 15.8 percent in the fourth quarter, for game tallies of 49 percent for Northern and 28.6 for UMD. Brooke Olson scored 23 and Taytum Rhoades 16 for UMD, but the ‘Dogs hit one for 22 – 1-for-22 – on 3-point shots, yet they kept on shootin’.

This has been as competitive a Formula 1 racing season in a decade or two, and it is coming down to a climactic finish this weekend in the Saudi Arabian Grand Prix, and next weekend at the Abu Dhabi.
The dominant Mercedes team, lead by defending champion Lewis Hamilton, has been found to be less than dominant when Red Bull’s you star Max Verstappen won three in a row in the second half, and now leads Hamilton by 8 points.
Points are distributed on a descending order from first to 10th, so it’s impossible to estimate, but it’s likely that Hamilton and Verstappen will end up qualifying 1-2 and possibly winning and finishing second, which would send the championship to its final week at Abu Dhabi.
The Mercedes-powered Hamilton and Valtteri Bottas tandem is potent, but the Red Bull tandem of Verstappen and Sergio Perez in the Honda-powered Red Bull race cars have been the class of the field, and Sunday’s showdown in Saudi Arabia at 11:30 a.m., Central time, and next weekend’s Sunday finale at 7 a.m., will earn millions for whoever wins.

In the photo at right, UMD’s Brooke Olson went up and over St. Cloud defender Nikki Kilboten for 2 of her 22 points, but the Huskies won the Friday game. 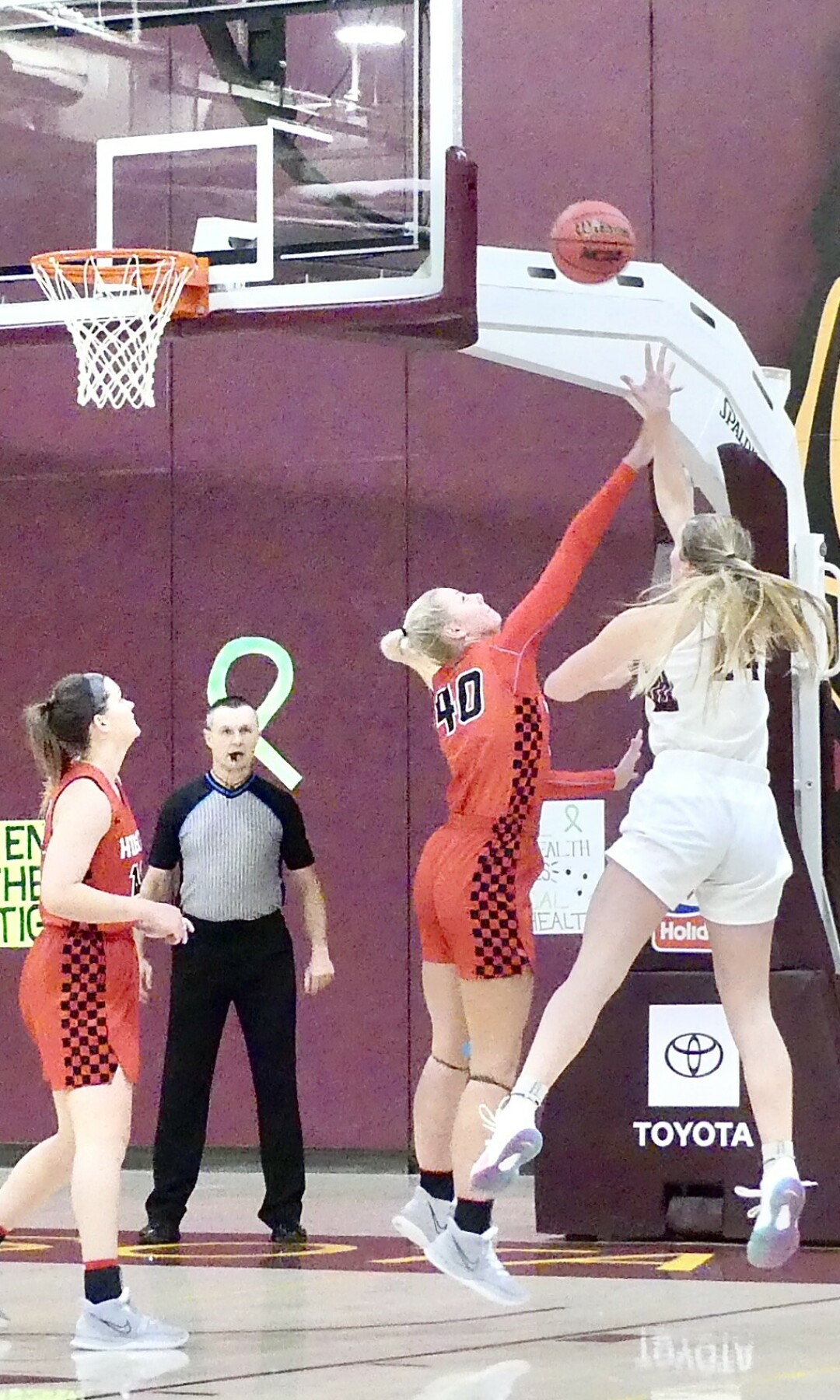 UMD’s Brooke Olson went up for two of her 22 points, but the Huskies won the Friday game.