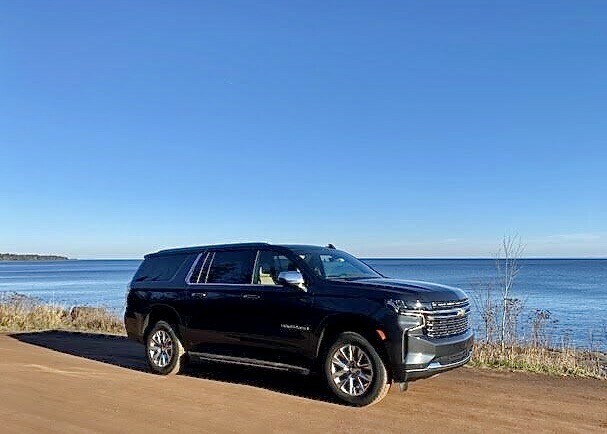 Whether it’s football season, hockey season, basketball season or buying-a-new-vehicle season, we can all agree that the “American way” is to own something bigger and more imposing than anything any of your neighbors are interested in.
That’s not always true, particularly from this column, where I’ve always stressed that buying a vehicle should mean you get the smallest version of something that’s big enough.
The 2022 Chevrolet Suburban can convince you otherwise – if you can afford it.
With a base price of $58,800 and an as-tested sticker of $79,370, the 2022 Suburban I got to live with for a week was the Suburban AWD Premier model, and it did its best to spoil us throughout a November week that included a small dose of snow and slippery roadways in Northern Minnesota. It never slipped, and never missed a beat.

It pampered us as though the nastiest cold wind blowing out of Canada to us along the North Shore of Lake Superior might just as well have been a soothing breeze on the western shore of Key West, Florida.
You are in a fortress on wheels – 20-inch wheels, at that – and you could get massaged into believing that you are impervious to any outside problems.
Yes, it took on a personality, and if we owned it, we would have to bestow some fitting nickname on it
Going back to the sports analogy, it’s like your son grew up as a wide receiver and turned into a defensive tackle, or you planned on a quick-striking centerman and wound up with a hulking defenseman who appreciates the alternative term “policeman.”
Or you envisioned an elusive, 3-point-shooting guard and instead raised a power forward who crashes, bangs and rebounds.
But a successful team in any sport needs all the elements.
With some degree of sarcasm, I’ve previously identified a Cadillac Escalade as “a Suburban with bling,” and that generally holds true, and you could add the GMC Denali into the same grouping, because General Motors continues to duplicate the Suburban and dole versions out to every division that wants one.

All sarcasm aside, though, if you have a young, growing family that already has accumulated three kids, or more, any SUV you might be interested in has got to be big enough to accommodate the whole family.
Also, we won’t reiterate the idea of checking out the newest crop of minivans, which make the most economic sense for those with larger hauling requirements, nor will we chastise those who simply insist they “don’t want a minivan” regardless of logic.
If you watch the news, Suburbans are the vehicles of choice when presidents need a ride to the airport, or dignitaries show up from a foreign country and need transporting in a motorcade. Maybe there will be an Escalade mixed in, but the very look of the Suburban is what matters, and the new one is crafted with a squared off, formal-looking, shape.

Driving the Suburban is easy, and it helps you there, too, with all the latest electronic gadgets to alert you to danger or to help you stay in your lane.
Having a large, 6.2-liter V8 under the hood, and a 10-speed automatic transmission to keep it in the correct rev ratio, makes it responsive, as it should be, with 42.0 horsepower and 460 foot-pounds of torque.
There is nothing wrong with that traditional old pushrod engine, unless you are seriously into fuel economy. We got 10-12 miles per gallon in and around city driving with a few short trips added in. And at 11.56-to-1 compression ratio, it wants 91-octane premium fuel, which costs more than 50 cents more per gallon than regular.

Handling is far better than the Suburbans you might remember, as a changeover last year gave it independent rear suspension, and a newly devised platform that is partly unibody rather than conventional body-on-frame.
Until that change, GM’s biggest SUVs were pretty simple, by taking a Silver-ado pickup platform and plunking a luxury body onto it. The new one, now a year into operation, is stronger, safer and allows it to handle with much better agility.
It also picks up on Chevy’s magnetic ride control, with mechanical limited slip, a 2-speed transfer case, hill-descent control and beefed-up cooling and controls for enhanced trailer towing.
One of the aims of the new Suburban is to declare that it is capable of going off-road, so it has a rugged undercarriage and the capability of doing more than just getting the family up to the cabin in summertime or to the snowmobile or skiing destination in winter. The all-wheel drive system will take care of that without straining.

Exterior appeal is enhanced by the color itself, which is called “Evergreen Gray Metallic.” Apparently near Detroit, the evergreens grow gray, although we still make them various shades of green in Minnesota.
I might recommend “Evergray Metallic” as an alternative.
Once inside, the color scheme is “Jet Black/Maple Sugar,” and it is welcoming because you know the perforated leather bucket seats are heated and cooled, as are the second-row buckets.
The second row might be the place to be, with two buckets, and a third-row bench in the way-back. The 10-speaker Bose audio system will encapsulate you with sound.
But those second-row buckets and third-row occupants have 12.6-inch diagonally-measured LCD HD screens for video watching to keep the kids occupied enough to avoid the “are we there yet” comments.
We all know it is just a matter of time until the changeover comes, to replace traditional gasoline engines with some form of electrification of some sort, hybrid or pure electric. But until we get to that, those of us with big families or car-pooling necessities will need to get everyone to their destinations.

And the 2022 Suburban is a valid candidate to haul everyone there in comfort and convenience.
Not only that, but the occupants can go back to that opening analogy and watch their favorite sports event in some form on those large screens affixed to the backs of the front buckets.