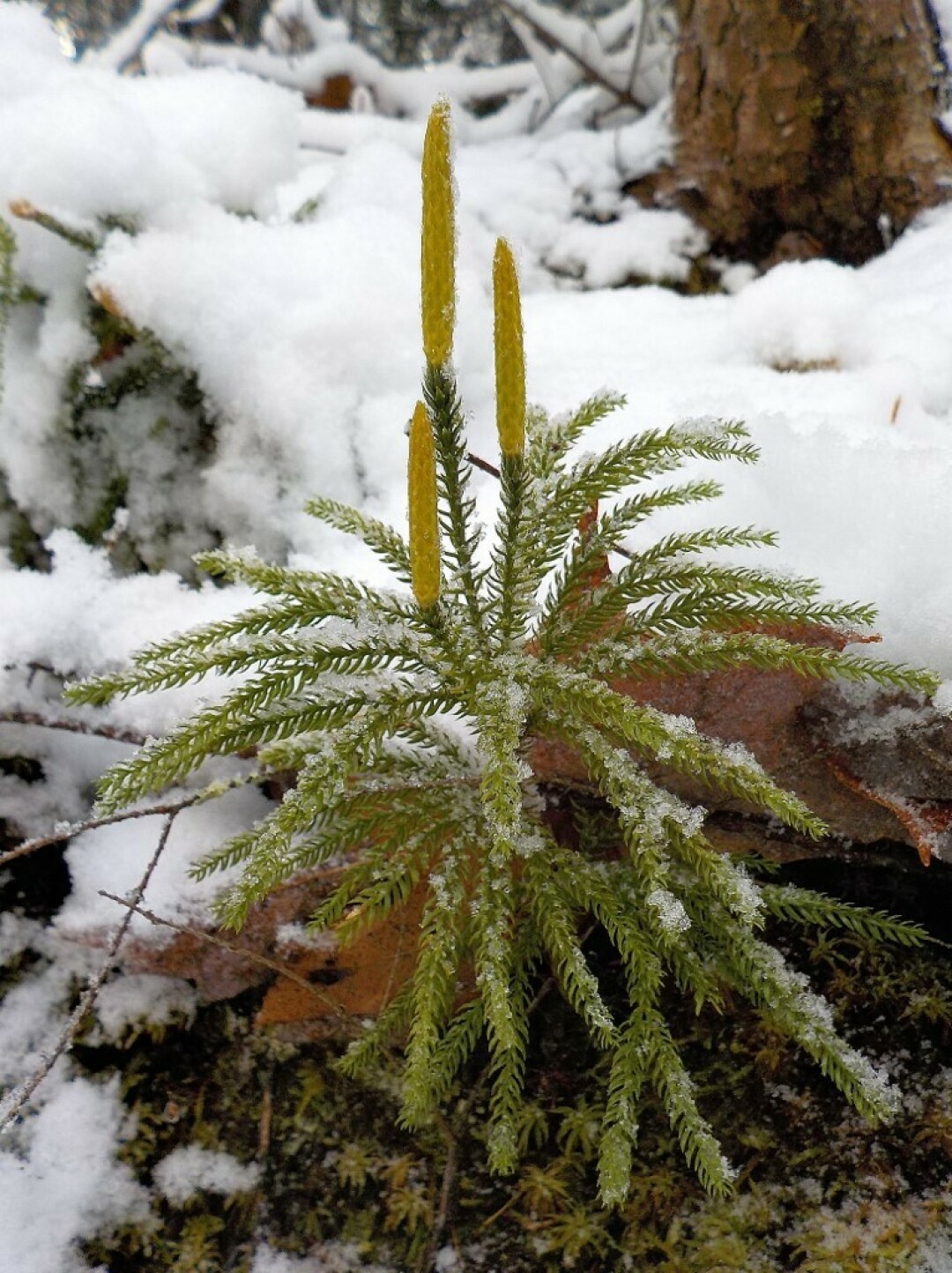 Clubmosses area small evergreen plants who release their spores from club-like strobili. They are often (destructively) used in making Christmas wreaths, but their magic is best experienced in the woods. Photo by Emily Stone.

A flock of hikers crunched down the oak-leaf-covered trail behind me, their blaze orange accessories complementing the last of autumn’s browns. The leaves had already been kicked up by herds of turkeys and scraped aside by the local 8-point buck.

On this “Deer Widows Walk” (named for the marketing ploy that entices hunters’ wives into stores while their husbands are busy in tree stands on opening weekend of gun deer season) non-hunters of all genders were simply interested in hiking without fear of stray bullets.

The Forest Lodge Estate – owned by the Forest Service but not yet open to the public without a guide – provided just the place. The plan was to hike briskly between nature stops, and a brisk wind off Lake Namakagon held us to that plan.

Not far in, a patch of green – with exclamation points of yellow – caught my eye. Smiling to myself, I reached for the old Bic lighter I’d slipped into my pocket before the hike, hoping for just this opportunity!

This would be a nature stop.

“Gather up everyone! Make sure you can see,” I encouraged as I crouched next to the patch of doll-sized Christmas trees.

Only those mini trees weren’t really trees. You might know them as ground pine, prince’s pine or clubmoss.

However, none of those names are entirely accurate. They definitely aren’t pines or mosses, nor do they belong to royalty.

If you’re botanical, you might know them by the genus Lycopodium (Greek for little wolf foot), but after recent DNA testing, most of our species have been given new names. Their family remains: Lycopodiaceae.

Back in the 1700s, Carl Linnaeus put these plants into a group we call “Fern Allies,” a sort of catchall name for non-flowering plants who have a vascular system and reproduce through spores.
Clubmosses often bear their spores on specialized stems called strobili, which looked to someone like little, yellow clubs.

Before crouching down, I’d tapped one of those strobili experimentally, and had been rewarded by a small poof of yellow. It’s not often that I’m in the woods at the particular moment when the spores are ripe but not yet gone. And now, here I was with both an audience and a lighter.

Gloves removed, I held the lighter downwind of the strobili. With my left thumb and pointer finger I gave a little flick, sending a cloud of spores toward the flame.

For an instant, the fire crackled higher. I flicked again, and another tiny explosion shone in our eyes.
Clubmoss spores contain 50% fat, but that’s not why they are so flammable. Instead, it’s the simple equation of fine dust with a relatively large surface area per unit of volume being combined with plenty of oxygen and a spark.

It’s the same combination that makes the news when a grain elevator explodes.

I’ve only harnessed the power of Lycopodium powder to win favor with my nephews or impress field trip participants. Historically, though, it provided the flash for photography.

And in 1807, before fossil fuels were widely available, Lycopodium spores were used by French inventors to power the first internal combustion engine and propel a boat.

You can still purchase Lycopodium powder, often under the name “Dragon’s Breath,” for relatively safe use in magic tricks and theatrical special effects.

I love making things explode safely, but that isn’t necessarily the neatest thing about these spores.
Very similar to the seeds of orchids, they are designed to drift widely, but don’t carry enough energy to grow on their own.

Once they land in a likely spot – not compacted or disturbed – the spores are attacked by fungi in the soil. Or maybe attack isn’t the right word. Because the tiny clubmoss gametophyte is fed by the fungi in a symbiotic relationship.

In a pattern called “the alternation of generations,” the tiny gametophyte produces eggs and sperm, which combine and grow into the sporophyte – the clubmoss we know and love.

Clubmosses grow slowly, though, and the sporophyte’s first year of growth is entirely below the soil, and entirely fed by the same fungi that partnered with its parents.

Once the young clubmoss reaches the sunlight, it begins to photosynthesize and produce its own sugars, but even then it grows slowly.

Each year the horizontal stem, called a rhizome, grows a little farther and sends up just one vertical shoot. Clubmosses don’t need to grow rapidly, because toxic alkaloids in their leaves deter most animals from snacking on their ever-greens.

Christmas wreath-makers are their main enemies, since a single wreath could contain – and kill – many years’ worth of growth.

It’s best to leave these delightful plants in the woods, where, if you happen to find them when their spores are ready and the wind is right, you can see a little clubmoss magic.

I also have a video of clubmoss spores exploding you can view at https://youtu.be/WGtbXPvcfXQ.

Emily M. Stone is Naturalist/Education Director at the Cable Natural History Museum. Her award-winning second book, Natural Connections: Dreaming of an Elfin Skimmer, is now available to purchase at cablemuseum.org/books and at your local independent bookstore, too. For more than 50 years, the Cable Natural History Museum has served to connect you to the Northwoods. The Museum is now open.