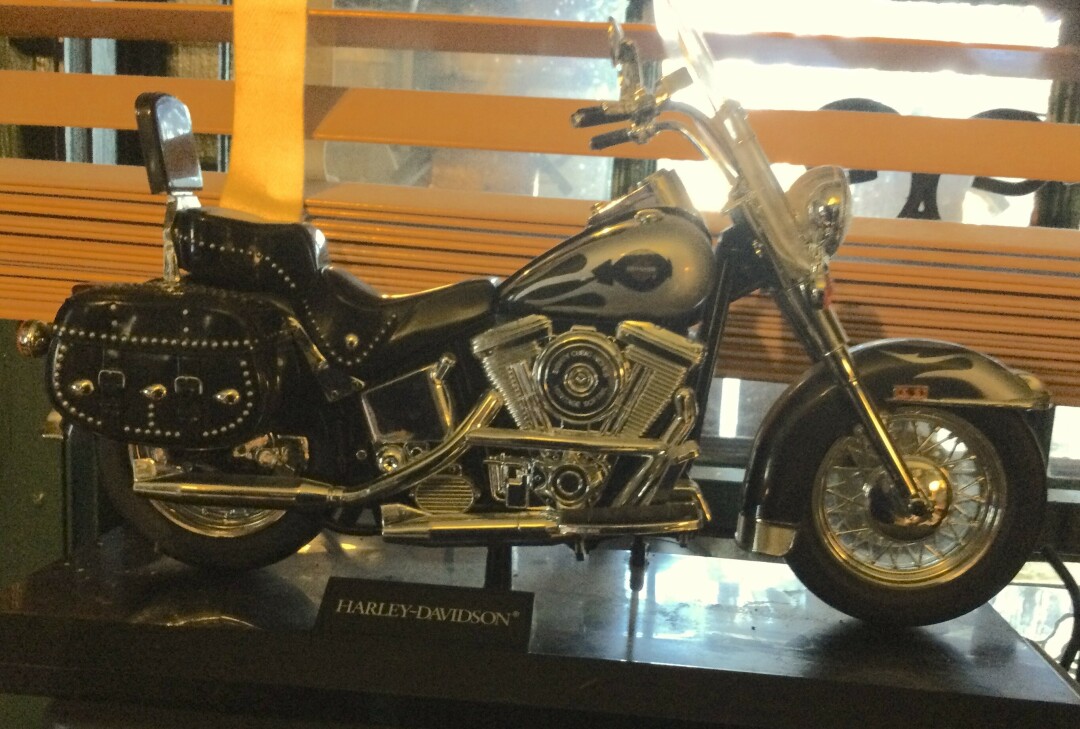 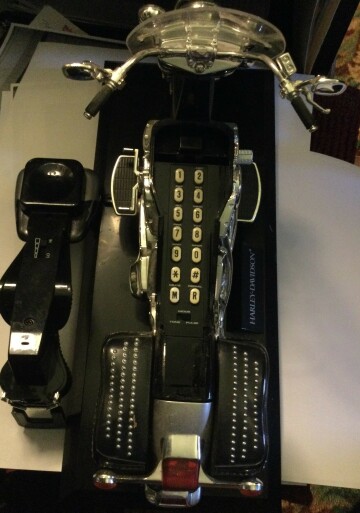 My favorite phone is a Harley-Davidson. When a call comes in, the headlight flashes and the motor roars. Pick up the body and put your ear under the buddy seat, and talk into the gas tank. Pretty cool.

My Kermit phone croaks when a call comes in; the mallard quacks and his eyes flash red. Mickey Mouse waves his arms and gets all excited for me: “Boy, oh boy,” he exclaims. “Phone call for you!”

I also have a Goofy phone, and a Tweety Bird phone. I can’t remember them doing anything.

The problem with all these phones is that I can’t use them.

The REAL problem, of course, is that I’m old. I resisted getting a cellphone as long as I could, but literally everyone insisted that I MUST have one. Some snobbish vendors apparently will give up possible profits rather than sell to a person who is cellphone-deprived.

So I went through a couple of Tracphones, fighting with them all the way. I gave up then, and bought an iPhone, thinking that I would have a head start with that, because I also use an iPad and an iMax. Wrong again.

I did learn how to sort of make a phone call, and put in contact numbers. Then they changed the rules, so we now have to dial the area code for all calls, and I can’t figure out how to easily change those contact numbers. I would like to delete some things, but I can’t do that either.

And this is why I still have a landline. I have a long house, so I need a lot of phones to be sure I can get to one before it stops ringing. Then, since I have to have Caller ID, I have to stop and put on my glasses to see if it’s a call I want to pick up. Ninety-nine chances out of 100, I do not.

There are three phones just in my bedroom. One is by my mission desk, where I do the bills. One is by my bed, for the phone calls that invariably come in when I am napping.  A third phone hangs on the wall by the kidney desk that holds my iMac. It is rarely picked up, because its main purpose is to hook into my Captel phone system.

I really need a phone by my power chair, but that is in the middle of the floor. If a call comes in while I’m in that chair, I have no hope of getting to a phone in time to see who’s calling, so I have to make sure I bring one with me before I sit down.

I am hard of hearing, although I seldom have trouble talking on my other phones. The main reason the Captel phone is where it is, is because “Jeff”, the IT guy from Mumbai, talks as fast as he can, hoping to get rid of me as soon as possible. The problem is, he talks tech with a pronounced Indian accent, and I have a great deal of difficulty trying to translate what he is saying into English.

Sometimes (but not always) the Captel operator might catch a couple words that I missed, so I can get an idea what his subject is.

The Captel phone has a contact list which comes in handy, There is also a separate list for Favorites, so I can keep my family’s numbers in one place. I don’t have to wonder if that’s my granddaughter’s wireless number as long as I’m near that phone – the phone identifies the call as coming from her.

The Captel phone also has an answering machine. My name is still in the phone book, so that is just inviting calls from anyone. For this reason, I need the answering machine. Anyone who REALLY wants to talk to me will leave a message.

I have gotten messages from a couple telemarketers who were apparently getting desperate after trying without success to get me to answer their calls. The first was from a person who was worried that I might have let the extended warranty on my car elapse. He had good reason to worry:  I drive a 2003 Suzuki, and Suzuki quit selling cars in America about 10 years ago, so I may have trouble getting my car to a dealer.

I still get a lot of calls from NAME UNAVAILABLE, but I suspect these calls are from telemarketers who have quit trying. Who in their right mind would answer a call from an unnamed person?

My suspicion is that these people are on a quota system, where it doesn’t matter if someone answers, as long as they can prove they’ve made the specified number of calls. In that case, they’d rather you did not pick up, so they don’t have to waste time lying to you.

After the telemarketers found they could “spoof” you – that is, give you a call using someone else’s name and phone number, I was getting a lot of bogus local calls, mostly from people I didn’t know, but one day I counted 12 calls I got, apparently from myself.

I was tired of talking to myself that day, so I didn’t pick up for any of them, even though I was a little curious to know what I could possibly want.

I get an occasional Wireless Caller, or a VOIP caller (I have no clue what a VOIP is.)

I know where Aurora is, and I have a vague idea about where Fergus Falls is, but I confess I don’t have a clue about Battle Lake. Wherever it is, some telemarketer is hopeful that I might know someone from there.