Mike Randolph will resume his career as an elite coach in Minnesota high school hockey this weekend, when he officially becomes Associate Head Coach at St. Thomas Academy with an elevated position in Coach Trent Eigner’s regime.

The news meant Thanksgiving came a week early for Randolph, who was unceremoniously removed as head coach after 32 years at Duluth East, which included 18 trips to the state tournament.

“It came out of nowhere, really,” said Randolph, who had been announced as assistant coach at St. Thomas, an elite private school in Mendota Heights. “We were at practice, and Trent skated up to me and said he was going to make me associate head coach. I’ve been having such a great time getting to know the kids and the parents, that this just makes a perfect situation better.” 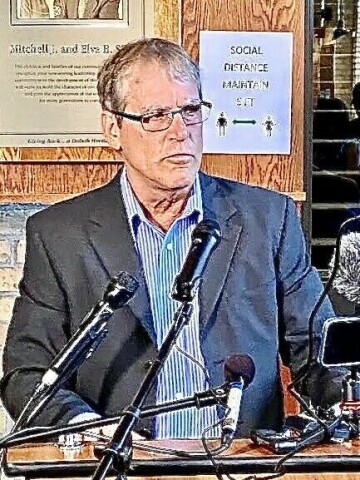 Former East High hockey coach Mike Randolph at a news conference earlier this year. He has been promoted to Associate Head Coach at his new school, St. Thomas Academy.

Randolph isn’t sure how many games his teams won in his 32 seasons at East, but the estimate is 658, which makes him third all-time and within reach of becoming the all-time most-winning coach within another year or two. He and Eigner have been close friends since their recent rivalry, and Eigner made the move to lift Randolph to associate head coach after the two spent time working together at practices.

“Actually,” Eigner said, “I told Mike I wanted to make him associate head coach because when he breaks that record, I want him to be standing next to me. So far, he’s lovin’ it. He’s like a kid, he’s so excited.”
Randolph, and his wife, Ginny, plan to be doing a lot of commuting, from their home in Lakeside to the Twin Cities, where three of their four children are living.

“It couldn’t be better for me,” Randolph said. “My daughter, Jill, and her husband just bought a place that’s five minutes from the St. Thomas Academy rink. The downstairs is like a hotel suite where we’ll stay.

“I don’t think I’ve ever been treated like I have by the players and their parents at St. Thomas Academy. I told Trent, they treat me like I’m a legend. He said, ‘You ARE a legend, and I’m making you associate head coach because you deserve it for all you’ve done.’ He said if he was closer to me in wins, he might not have done it, but he said he’s never going to get there. I told him not to be too sure.”

Randolph had thought of taking this year off to assess what hockey programs in the Twin Cities might be looking for a new direction, but the chance to join Eigner’s staff was an opportunity for him to stay in coaching while showing other schools he still wants to coach, after officially retiring from East when the school said it would not renew his contract. Being an assistant coach would mean that however many games St. Thomas Academy would win would not add to his resume, but as associate head coach, they all will. 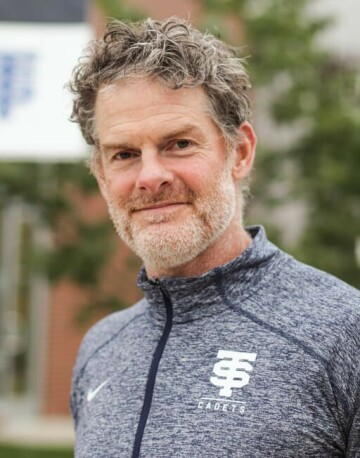 “I told Trent that some of the parents have asked how long I’d be staying there, but I want him to know that because of this, I am there for the long haul,” Randolph said. “Trent is an outstanding coach, and he’s got some great assistant coaches, so I’ll do anything I can to help their program, and I have no problem finishing my coaching career at St. Thomas Academy.”

Last weekend, he joined Eigner on the bench for scrimmages against Benilde and Eden Prairie, both of which St. Thomas Academy won, although Randolph insisted he had no idea what the scores were. T
his weekend regular games begin and an opening weekend tournament will be conducted at Bloomington Ice Garden. St. Thomas Academy opens on Friday against Chaska, and then plays Cretin-Derham Hall on Saturday.

A fascinating aside is that Dave Spehar, the former state tournament star for Randolph at East, is raising a family in Chaska, and his oldest son, Sam, made the Chaska varsity.

So Randolph will be on the opposing bench from the high-skilled son of East’s all-time star player.
A further side note is that Duluth East, now coached by Steve Pitoscia, will open its season at White Bear Lake Friday, then will join the field at Bloomington Ice Garden to play Chaska on Saturday.

Win some, lose some

The UMD men’s hockey team won a huge 4-1 victory at North Dakota last Friday night, before dropping the rematch 2-1, while elsewhere, Western Michigan continued to establish its talent level by sweeping No. 2 rated St. Cloud State 6-2 and 4-0 in Kalamazoo. and Denver thrust itself back into the picture of contention by sweeping Miami of Ohio 4-1 and 7-1.

The NCHC race is wide open, obviously, as is the Big Ten, where favored power Michigan was swept by Notre Dame, 3-2 in overtime and 5-4 in overtime, while previously winless Penn State came into Mariucci Arena and stung Minnesota 5-3 before the Gophers won 4-2 with an empty-net goal.
Michigan State swept Wisconsin 3-2 and 5-2.

This weekend, UMD returns to AMSOIL Arena to face Alaska, previously known as Alaska-Fairbanks, in games at 7 and 6 Friday and Saturday, while the Gophers head for Grand Forks to face North Dakota in a non conference series between two old rivals.

The UMD women’s team, which historically has had tight, tough games against Bemidji State, went to Bemidji and blasted the Beavers 9-0 and 4-1, and this week will go to Washington, D.C., to face Penn State and St. Lawrence in an interdivisional tournament before returning home for a huge series against Ohio State.

Meanwhile, UMD’s football season ended with a thud, after a stirring drive to reach the NCAA Division II regional, the Bulldogs ran into a buzzsaw at Angelo State, in San Angelo, Texas.

Angelo State’s speedsters established territorial superiority by returning the game’s opening kickoff 100 yards for a touchdown, and racing to a 41-0 lead at halftime, on the way to a 48-14 rout.

The victory, in which Kirk Cousins distributed passes equally to Justin Jefferson and Adam Thielen, and dueled Aaron Rodgers to a virtual standoff before Greg Joseph kicked a 29-yard field goal as the final 2 seconds ticked off the clock, lifted the Vikings to .500 at 5-5, while the Packers slipped to 7-3.