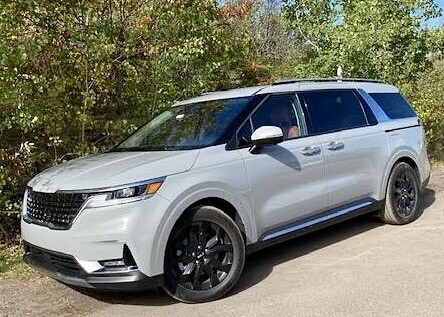 Kia Carnival is exceptional when loaded, but still impressive with reduced features and price. Photo by John Price.

We’re still a month away from 2022, but on Thanksgiving Weekend, we can be thankful for our health – if we have it – and for some early arrivals on the automobile scene, as 2022 models, if we can afford one.

One of the notable newcomers is the Kia Carnival, which has jumped into the minivan segment and elbowed its way into the tightly defined elite level.

If you like to drive to Grandmother’s house for holidays and you have three kids or so, you will be thankful for the amenities in the Carnival. And while becoming a home on wheels for trips, the airiness and openness of the Carnival gives occupants in all three rows separation as well as room for their own space.

Being able to stay warm as the temp-erature drops below freezing is important, of course, but so is the ability to see outside, and the wonders such as we’ve been witnessing in the spectacular sunsets on the North Shore of Lake Superior.

Regardless of how many vehicles I’ve been able to test dive, it’s always like coming home again to get into the newest minivans, and that has only been amplified by exposure to the new Carnival.

Think about it. What better conveyance for the family to finish Thanksgiving dinner, watch a little football and then load up the Carnival to go for a relaxing drive to check out sunset and some neighborhood Christmas lighting.

I had a chance to write an earlier piece on the Carnival, which happened to be an SX Prestige model, loaded up with options to be priced up near $50,000. Reclining airline-type second row seating and virtual everything you could find in the option bin justified that price, but you don’t have to go all-in on options to find a Carnival that can transport an expanding family to its various appointments.

We got another chance to spend a week with a Carnival SX, which is still a fairly high-ranking member of Kia’s clan, but about $5,000 less costly than the Prestige. The base Carnival starts at about $32,000.

Buyers might wonder why Kia changed the name of its Sedona minivan to Carnival, and one easy answer is that in all other markets of the world, Kia’s long-standing minivan has been named Carnival, so for 2022, with an all-new platform, an all-new engine, all-new looks and new personality, why not give it the worldwide name as well?

Once again, it’s important to note that minivans have somehow become scorned by the more-macho SUV-buying crowd, but it’s also important to point out that no vehicle on the planet except a city bus makes more sense for the economical and efficient transporting of six or seven occupants.

Large SUVs are great, and fun, but they are generally far less fuel-efficient, and require larger engines to do their thing on truck platforms. Minivans start out on unibody platforms, allowing them to stay lighter and tighter, and more fuel-efficient.

The minivan segment has shrunk, out of SUV trendiness, but it remains a solid location for profit if you can make a minivan of exceptional quality and features. And that’s what has happened in the industry, with all of the collection of minivans having two things in common: Excellent entries – from Honda (Odyssey), Toyota (Sienna), and Chrysler (Pacifica) – and a unanimity from all manufacturers to try to convince buyers their vehicle is not just a plain ol’ minivan.

With exceptional roominess for family hauling, and all being about equal, those entries give buyers a wide-ranging group, and Kia’s ability to move right into their territory is impressive for the South Korean company.

The clean look of the Carnival combines a high-tech image as well as a classiness. The grille shows a new look, and the smooth sides and rear are up to contemporary standards. So it all comes down to how your family will accept or appreciate what you get for your investment.

All levels of the Carnival come with a new 3.5-liter V6 engine, direct injected, and with 290 horsepower and 262 foot-pounds of torque. That equates to a 3,500-pound towing capacity, which is a lot, for families who have a boat or travel trailer to pull.

Driving the Caravan is peppy because of the power output of the new engine, and the 8-speed automatic shifts smoothly and keeps you in command at all speeds or bursts of acceleration. The ability to take off with a sporty burst, and get up to freeway speed and hold it easily are assets, and that power also lets you appreciate the tight handling Kia has engineered into the new Carnival. I’m not sure it would beat all its rivals around a handling course, but I suspect it might. It’s also impressive that Kia has put the same drivetrain into all models, and price ranges from $31,000-$50,000, rather than putting an outmoded or underpowered engine in the lowest models.

We got from 25-27 miles per gallon with moderate driving, mostly citified, during our week.

When you drop down from the top of the line SX Prestige model, you can lop off a few features without missing them. That includes dropping from the very good Bose Premium audio system to the standard

Kia system, and eliminating the impressive leather seats for comfortable and hardy cloth buckets, and if you don’t tell the kids that the higher model has reclining buckets with lounge-chair-like under-calf footrests, they’ll never know what they’re missing.

I’m surprised how many folks don’t want or enjoy sunroofs, because our family loves them, but losing the huge, twin-pane sunroof is another victim of saving $5,000 or more on the sticker price.

The other assets Kia can boast against its rivals is the impressive suite of safety items Hyundai and Kia have compiled in the last decade. As its steering and handling have improved in all vehicles, the South Korean partners have also come up with items like lane-departure alert and then lane-departure prevention, which led up to the current lane-keeping and lane-cen-tering devices that use computers and cameras to keep you in the center of your lane even while engaging tight curves. In city driving, rear surround view is a big help, augmenting the cross-traffic alert and front and rear collision avoidance.

And when parked, you get a rear-seat warning device to prevent occupants from throwing open their door if a car is coming along in the next lane. And a very  neat and unique device puts a rear-facing camera shot of the adjacent lane whenever you hit the directional signal to change lanes, and transposes it into the instrument panel gauge, either the tachometer or speedometer.

For the future, I will be eagerly awaiting the additions of hybrid and other electric-vehicle advances that are coming on some smaller vehicles and SUVs soon, and quite logically might appear on future Carnival models. Toyota’s Sienna offers a hybrid model for 2022, and others also offer all-wheel drive.

Kia has jumped into the highest realm of minivans, so it’s not likely to overlook such competitive items.