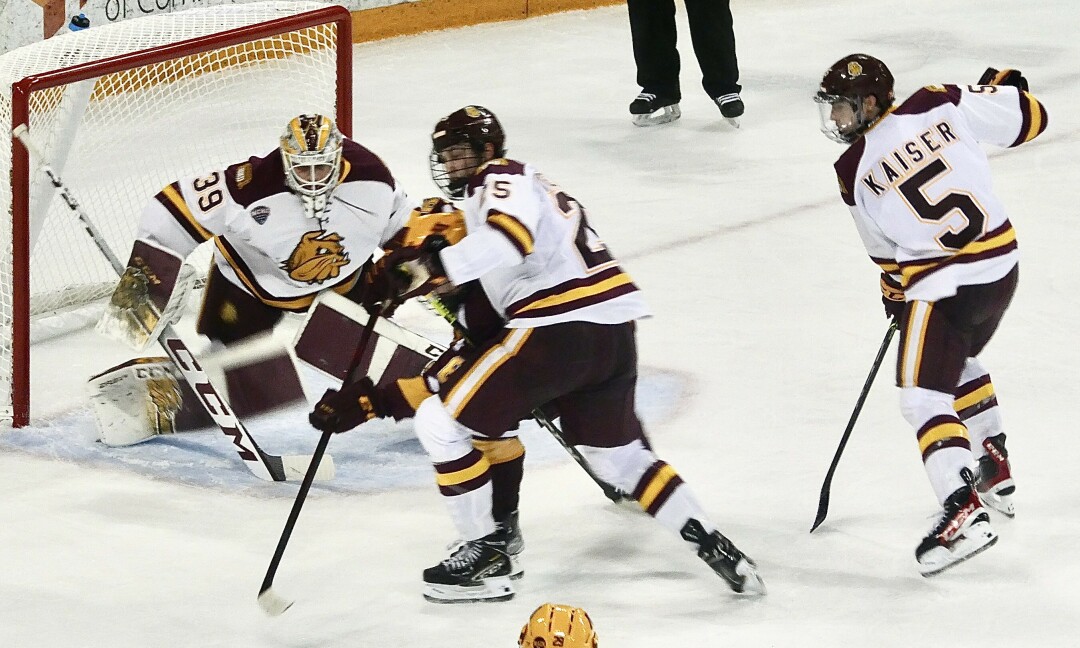 Time flies by, unless you are not surprised that Scott Sandelin is in his 22nd season as UMD hockey coach. As his two decades-plus flashes by, it is difficult to remember exactly when UMD overtook the University of Minnesota’s proud and historic statewide hockey dynasty to become the state’s most prominent program.

Despite the mountain of Twin Cities media outlets who still pretend the Gophers reign supreme, the Bulldogs sweep of last weekend’s home-and-home series mean UMD has not gone 12-1-1 against Minnesota since the Gophers went off to the Big Ten and UMD helped start the NCHC.

When UMD skated onto the Mariucci Arena ice last Friday and stung the Gophers 5-3, then drove back North on I35 to beat Minnesota again, 2-1 at AMSOIL Arena, it extended coach Scott Sandelin’s domination over the program that was the genesis of all things hockey in Minnesota.

Back in the days of John Mariucci, Minnesota was the state’s only Division 1 program, and when Glen Sonmor took over, the Gophers properly dominated WCHA and D-1 newcomer UMD, and Duluth fans chafed under the poundings at Minnesota’s hands.

When the Bulldogs started becoming competitive under Mike Sertich’s guidance, the Gophers were soaring to the stratosphere as Herb Brooks took them to unprecedented heights – the school’s first three NCAA championships in 1974, ’76 and ’79, during  Brooks’s 7-year tenure, which he concluded with the 1980 Olympic gold medal.

When Sandelin, a Hibbing native who played at North Dakota, got his first head coaching job at UMD, the program struggled through his first eight seasons, during which UMD finished above .500 only twice.

Since then, only one Bulldog team has finished below .500 with one other exactly .500, during the 2012-13 and 2013-14 rebuilding seasons. But only in his most recent eight seasons have the Bulldogs taken over against the Gophers. 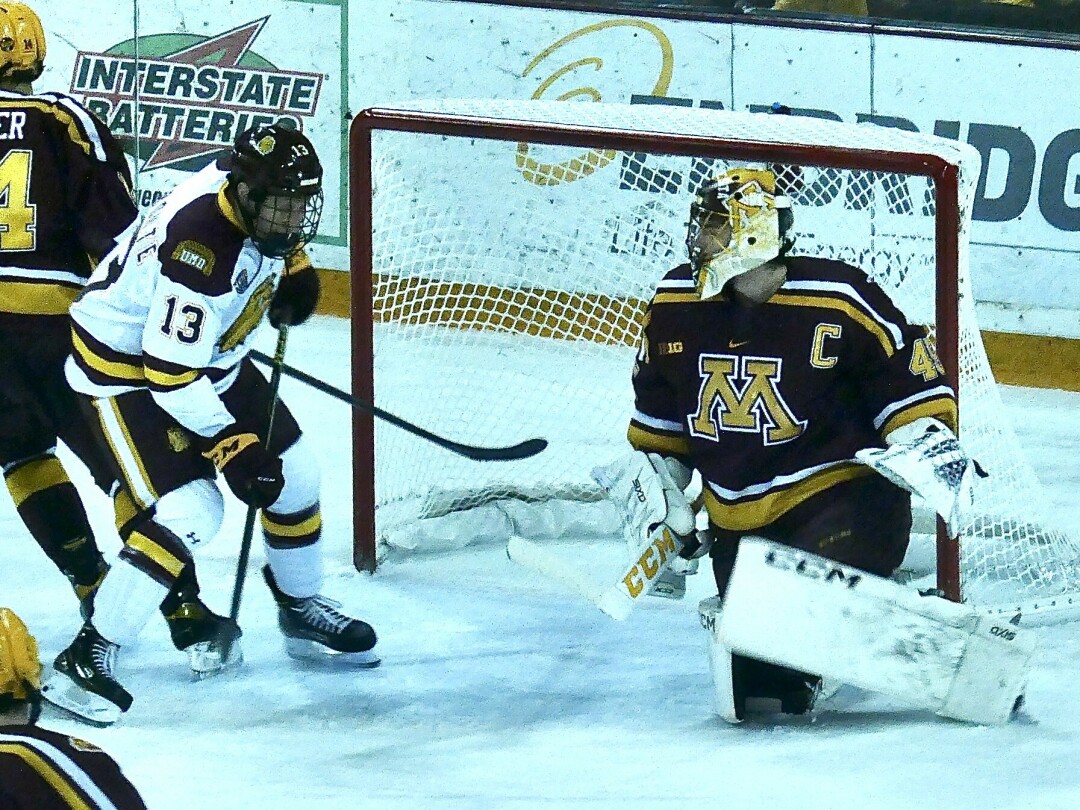 That means UMD has raised its deficit from 74-133-17 to its current 85-135-18 with the upsurge.
None of that may matter to the current roster of Bulldogs, some of whom had no idea of the Gopher-Bulldog rivalry until they came to college.

Tanner Laderoute, for example, a senior from near Edmonton, Alberta, said he knew nothing of college hockey growing up with an eye on Major Junior hockey in Western Canada. His deft touch at the crease midway through the first period Saturday brought the second-largest crowd in UMD’s AMSOIL Arena history (7,596) to life.

Blake Biondi, on the other hand, is a sophomore from Hermantown who knew all about the history, partly because his dad, Joe Biondi, was a former Bulldog standout. He went wide to the left late in the first period and had a wide-open chance to put away a rebound for a 2-0 lead.

Goaltender Ryan Fanti, a junior from Thunder Bay, might have played his best against sustained pressure as the Gophers swarmed to the attack, and he held on against the last two minutes of pulled-goal offense to cling to a 2-1 victory after Mason Nevers got the Minnesota goal at 6:26 of the third period.

The night before, UMD continued a strange ability to venture onto the wider Mariucci ice – 100 feet wide instead of 85 – and play as if totally comfortable with cohesive line flow making use of the wider range, while the Gophers looked uneasy and made only occasional individual rushes on their home rink.

With an 11-0 shot edge through the first 10 minutes, UMD gained the lead when Biondi opened the scoring, drilling a left-corner draw from freshman center Dominic James at 1:53. Six minutes later James went wide to the right boards and flung a 50-foot shot that beat ace Gopher goaltender Jack LaFontaine from Mississauga, Ontario.

Minnesota got one back on a power play to end the first period, defensemen Owen Gallatin and Wyatt Kaiser scored in the second to build a 4-1 lead.

Like James, Gallatin and Kaiser are all from Twin Cities suburbs and know well the intensity that goes with facing the Gophers. 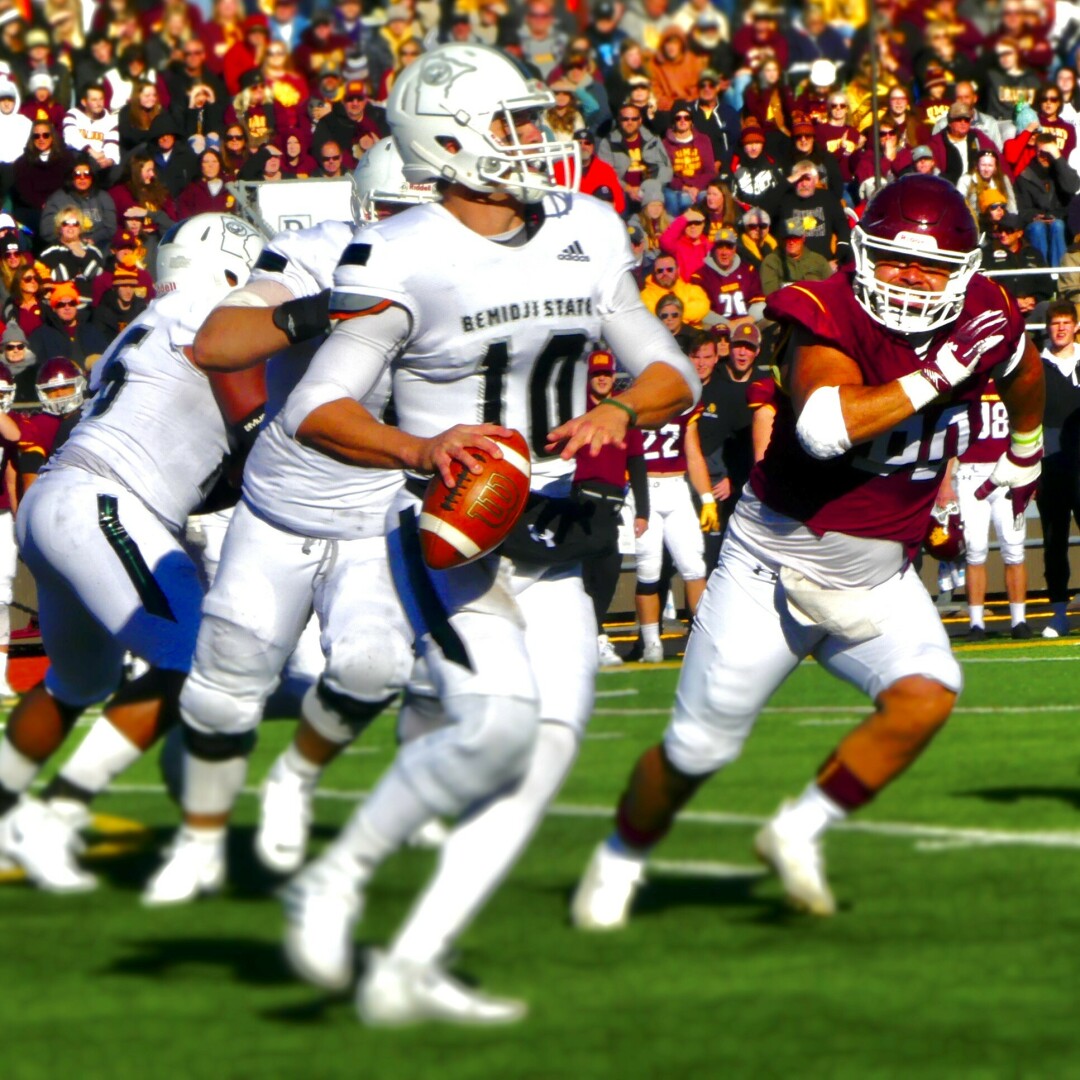 Bemidji quarterback Brandon Alt stole the show, and the game, with six TD passes in a 42-34 shocker to break a UMD streak that dates back to Pearl Harbor.

Ben Meyers cut it to 4-2 at the end of the second period, but Casey Gilling’s first goal as a Bulldog made it 5-2 before a shorthanded breakaway by Grant Cruikshank made for a close finish.

Sandelin shrugged off any talk of dominance, and Gopher coach Bob Motzko hasn’t been in charge long enough to have figured it out, except that the talent it takes to win in the Big Ten might not be enough to succeed in UMD’s NCHC.

As for the state of hockey, the Bulldogs and Gophers right now are challenged by St. Cloud State and MSU Mankato, who are ranked 1-2 in either order by ranking outfits, with UMD third or fourth.

As streaks go, you can’t find any as long as UMD’s football domination of Bemidji State.
If nobody remembers the last time the Beavers beat the Bulldogs in football, in Duluth, it’s understandable. Bemidji State last won when UMD was Duluth State Teachers College, back on Oct. 10, 1941 – 80 years ago – and folks around here had other things on their minds, since that 34-0 loss came five weeks after Japan attacked Pearl Harbor and flung the U.S. into World War II.

Bemidji State has had more success away from Duluth, although the last time the Beavers beat UMD was in 1999, in a 35-26 triumph. Since then, the teams have met 18 times and the Bulldogs have gone 18-0.
Make that “had” instead of have. Sure enough, last Saturday, while the Bulldogs were in the 2021 version of cruise control against a Bemidji State team that shared the Northern Sun North lead with UMD, all looked calm as the Bulldogs entered the fourth quarter leading 35-21 – pretty safe, considering the history of the two.

But sophomore quarterback Brandon Alt was far from finished. He already had offset UMD’s offense by countering an 18-yard touchdown pass from Logan Graetz to Armani Carmickle with a 59-yard bomb to Malik Williams for a 7-7 first quarter.

UMD’s Cazz Martin went off for 27- and 69-yard touchdown runs to establish a 21-7 lead, but Alt passed to Brandon Beaulieu right before the half to close it to 21-14.

Again, UMD asserted its offense in the third quarter as returning quarterback John Larson came in and tossed a short TD pass to Byron Bynum, and Graetz fired a 26-yard scoring pass to Carmickle – but between them, Alt found Malik Williams again for a 29-yard touchdown, so it was 35-21 after three quarters.

Then, as they say, the fun began. Alt, who came into the game leading all NSIC quarterbacks in passing yards, opened the fourth quarter by throwing his fourth touchdown pass of the day to Beaulieu, a 23-yarder that closed the gap to 35-28. Then he threw his fifth TD pass of the afternoon to Dhel Duncan-Busby, for 16 yards.

On fire by then, the Beavers defense blocked s UMD punt, and Alt brought them right back to paydirt, throwing a 3-yard pass to Malik Williams for his sixth touchdown of the game and a stunning 42-34 victory that left the Bulldogs in shock.

The Beavers used big defensive plays in both halves to set up Alt’s spectacular day – 20-40 passing for 269 yards and six touchdowns with Williams catching 10 of those for 176 yards and three touchdowns.

UMD’s Logan Graetz had equal stats, going 24-35 for 261 yards and two TDs, but his final turnover came with a minute left to extinguish UMD’s final hope. Working Olson back in to complement Graetz, the Bulldogs tried a slick play late in the first half at the Bemidji State goal line. With Graetz back in shotgun formation, the wide receiver on the left went into motion, only it wasn’t a wide receiver, it was Larson, the fifth-year quarterback.

As he passed center, Larson  cut to his left, stopping under center for what would be a wildcat sneak play. Except that Larson fumbled the snap, and after a chaotic scramble, Bemidji State linebacker Ricky Thompson II pounced on the loose ball to eliminate the trick play chance.

It was that kind of day for the Bulldogs. 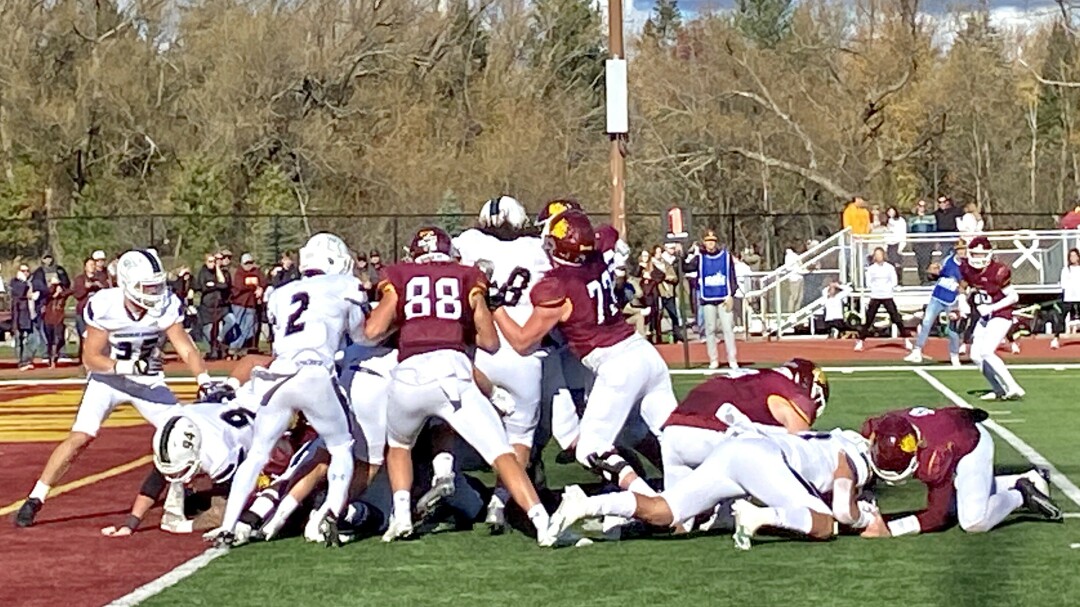 A trick play resulted in a UMD fumble, recovered at the goal line by Bemidji State's Ricky Thompson II, who stretched out, right, to recover.

The World Series is underway, and Houston is undoubtedly favored to beat Atlanta.
But if you’re neutral, or have a romantic bone in your sports-fan body, you will be pulling for ex-Twin Eddie Rosario, who struggled through an injury-filled season with Cleveland before being given away to

the Braves.
After languishing to recover from an abdominal injury and general lousy hitting, Rosario got a chance to platoon as a left-handed hitting left fielder in the playoffs.

And he took off.

I’ve never seen an individual player take over a team and a game the way Rosario did in Game 2 against the favored Los Angeles Dodgers. He was on first and daringly took second on a short fly to left. Then he raced home on a short single, diving wide and sliding his hand over the plate, inspiring a late victory.

Game 5 was tied and dramatically heading for extra innings, but when the Dodgers walked the batter ahead of Rosario to set up a force out, Rosario came up against their ace fireballing closer and socked the first pitch up the middle to win the game.

Rosario went 4-for-5 in two of the games, hitting for the cycle the first time. The second time, he needed a double to complete the cycle, and got one last chance, but instead hit a 3-run home run to clinch the victory – his second  homer of the game.

After straining to lift his batting average to .240, Eddie’s amazing playoff surge has been unbelievable: 14 hits in 25 at-bats, for a .560 batting average, driving in 9 and scoring 6, and 3 home runs.

Oh, and also the trophy as the most valuable player in the National League championship series.
I’ve written it for years, but to reiterate, Eddie Rosario is the best reason to watch a baseball game.

Anywhere, anytime, no matter which team you want to win.