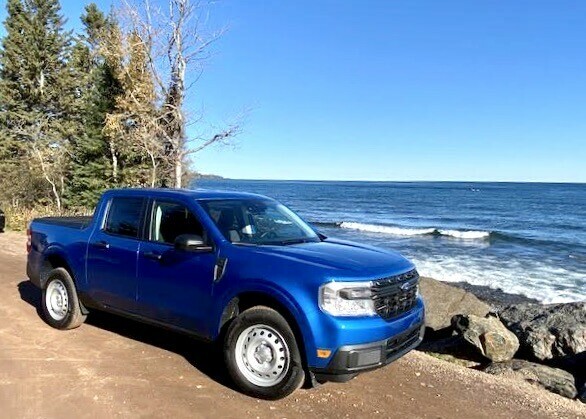 Ford’s new Maverick is perfect size and demeanor to sell out in the compact truck market. Photo by John Gilbert.

If a week-long test drive in the 2022 Ford Maverick had the power to establish new ground-rules in the automaking world, it would be that style counts a lot, color and pizazz matter too, trucks have indeed become the new cars of the current era, and the love of enormous pickups could be heading for the history books.

Now, all those things can’t possibly happen because of one undersized pickup, can they?
We hadn’t had a test car for a few weeks, so we were thankful when the Maverick showed up.
As a veteran auto writer, I recall less than fondly Ford’s first Maverick, a compact that seemed to be built of stray parts left over from something more attractive and more successful. When Mavericks ceased to be, I was relieved, being a lover of neat cars.
So the return of the Maverick wasn’t something our household had been eagerly awaiting.
But Ford, gambling that a new generation twice removed won’t remember the downside of the previous Mavericks, and besides, this one is a pickup.
Ford is king of pickups, with the large F150 the top seller annually, and now the return of the Ranger downsized pickup is battling compact pickups from Chevy, GMC, Toyota and Nissan, and, spotting a trend toward downsizing success, Ford followed its own current trend and brought out a downsized Maverick – a bit smaller than the Ranger but still with a rugged pickup-y macho look – and they threw it out io the public.

This was not a loaded Lariat, or a semi-loaded XLT, but an XL, which still has an impressive sound but which counts as Ford’s delineation of the “base” model in our era of superlatives.
That’s fine, I figured, because I enjoy getting the more base models sometimes just to avoid being spoiled by all the gadgetry of the loaded versions.
This test Maverick was decidedly unloaded, and the price tag reflected it: Base price $19,995, as equipped $23,860.
We were going to drive this Maverick as if we were a young family and this was our choice of family car. Three of four times, when I’d park downtown or at the Whole Foods lot, a passerby would catch my eye and walk over with almost identical approaches: “Is this the new…Maverick? We’ve been looking at these online. How do you like it?”

That would be followed by several minutes of conversation. I was impressed at how many people spotted the vehicle and knew it was a Maverick since it hadn’t reached the public yet, or many showrooms, even.
The shape, the styling, the Velocity Blue Metallic paint, all were attractions, and the super-neat shape and size were too.
When you park next to a full-sized pickup, you’re amazed how low the Maverick is. A normal adult can look over the top of the roof.
It was the perfect week to have the Maverick, because the UMD hockey team was headed off to Minneapolis to face the arch-enemy Gophers Friday night, with a return match in Duluth Saturday. We decided to drive down and see how our former home had changed in the past 10 or 20 years.
Among the options on the Maverick were a 2.0-liter EcoBoost turbocharged engine with 250 horsepower, and 277 foot-pounds of torque, plus a sophisticated 8-speed automatic transmission with autostart and stop-start, and LED headlights with autodim and automatic shutoff.
Among the options NOT included at that very low price: Styled alloy wheels, cruise control, leather (or any facsimile thereof) on the bucket seats, navigation, cruise control, seat heaters, satellite radio, foglight (although there were neat fake foglight covers that made it look like you really had ‘em but you were being careful to protect ‘em).

Those, remember, were all among the missing features that higher-trim Mavericks would have or could have.
Did I mention cruise control?
Without cruise on the freeway, the Maverick was more truck-like, eager to wander and less than precise in its steering trajectory. Maybe a Sport mode button could have helped that feeling of almost constant correcting just to stay in you lane.
Just as we were leaving Duluth Friday, I got an email from Victoria Orchard, a wonderful little apple orchard on Victoria Avenue just before it runs into Lexington in Shoreview. A very neat lady named Molly ran that orchard for years, after her husband died, and we walked to it frequently from our townhouse when I worked at the Minneapolis Tribune.

I like apples, but near the end of the season, Victoria Orchard is the only place I know that sells Chieftain apples – a hard, crisp red apple with a unique flavor and a crispness that, we found, stayed crisp in our refrigerator for a month, or even two, long after normal apples would have become soft throwaways.

It is an apple developed by experiment at Iowa State, as I understand it, and they generally need warmer growing areas than Minnesota, but only a few of them keep growing at Victoria.
I stopped in there a few weeks ago to make sure some Chieftains were coming. I was assured they were, but not for several more weeks. On Friday, I got a message they would be offered in very short supply next week. I messaged back my thanks but wondered if a preliminary batch might be ready that very day, and was told they would have a sackful ready for us. We drove directly there.

As I got out of the Maverick and purchased the prized Chieftains, we returned to the truck to find a fellow with an original style Ranger.
“That’s the new Maverick, eh?” he asked.
We had the usual discussion. He was impressed. The Chieftains were as fantastic as I had remembered.
We drove on and parked next to Mariucci Arena. It was $10, which is the same it was 20 years ago, not like AMSOIL Arena in Duluth which apparently considers parking fees part of the competition with the “Main U” and doubled the parking rate from $5 to $10 this year!
As we got out of the Maverick, another in the string of interested would-be buyers asked all about it.
I had contacted Brian Deutsch to check on my press credential for the game. Good thing, because it hadn’t gotten through. He said don’t worry, he’d take care of it. I knew the rematch in Duluth was a sellout, but the Gophers haven’t been drawing near the automatic sellouts of the past, so I mentioned that my wife, Joan, was coming with me and I didn’t think we’d have a problem buying a ticket. We got there, and at the press check-in, there was my pass. And a fellow said, “You’ve got another one.” Sure enough, Brian had arranged a “media support” pass for Joan.

It went that way all night. My seat in the press box was on the red line, and I could look around from a press box I had actually designed as a favor to Gopher boosters who wanted all the ideas I could muster as the best parts of all the arenas I had been in — and they put almost every one of them into the design of what remains the best arena in the country to watch a hockey game.

It was such a hospitable evening I almost felt guilty saying hello to arena old-timers and veteran workers after the game, because UMD, my “new” team to cover, simply overwhelmed a very good Gopher team and swept the series.
We returned to the Maverick and were surprised to find several of our favorite pizza places either gone or moved away, so we called out to Panino’s on Hwy. 96 in Shoreview and ordered the best sandwiches in town to go, and hit the freeway.
I admit to some erratic driving, but I will blame the lack of cruise control and the somewhat twitchy steering feel for requiring enough corrections to convince the Maverick to flash the “Stop and rest” signal, thinking I was being erratic. Joan would repeat the urging, and no matter how many times I told her I wasn’t tired or out of control, she believed the very pushy electronic system.

The convenience of maneuvering in traffic and parking, without having to guess the proximity of your front corner over the gigantic hood and fender of a full-size pickup, makes me realize that compact pickups might well be heading toward displacing larger pickups.
And Ford has a very slick 2.0 turbocharged engine with 8-speed automatic on a platform that can serve the Escape, the Bronco Sport, and now the new Maverick.
Back home, we had one more experience with a young couple at Vanilla Bean restaurant in Mount Royal.
“What do you think of this?” the guy said, and while he did all the talking, his wife had seen pictures of the Maverick and loved it, so she specked one out equipped the way she wanted at a little more than $30,000.
This one is very neat, I told them, but she would be wise to add some options. Especially cruise control. Because the test Maverick proved to be the first time I lost a domestic debate to my wife, who enlisted the vehicle for support!