Hate to see the end of Goliath 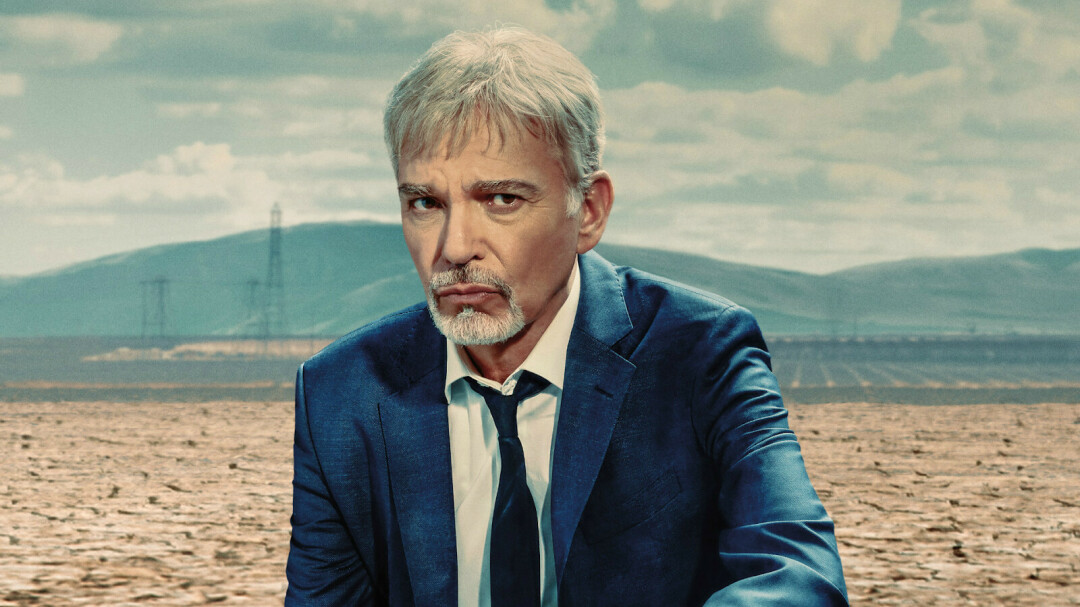 I am really going to miss Goliath, the fourth and final season of which just recently appeared on Amazon Prime.
The series stars Billy Bob Thornton as down-and-out attorney Billy McBride, who, when we first meet him, is doing business from his seedy hotel room and the even seedier bar next door.
When we meet Billy in Season 1, he is coming out of his hotel room to the great and seriously depressing “S.O.B.” by Nathaniel Rateliff and the Night Sweats, and the first thing he does is step in a pile of dog shit, which pretty much sums up Billy’s personal and professional life at that moment.
Things quickly change when he is asked to get involved with a wrongful death lawsuit that implicates powerful people who are not afraid to murder others to protect themselves.
In interviews Thornton has said that he completely identified with the character of Billy McBride, and you can feel that connection. He is a pleasure to watch as he gathers his resources and a ragtag team to fight the wealthy and powerful.
As good as Thornton is in the role, he is surrounded by great actors playing powerful characters, such as his legal partner, Patty Solis-Papagian (the Tony Award-winning Nina Arianda). When we first meet her, she is a DUI lawyer/real estate agent who has stumbled upon a wrongful death lawsuit, and she needs Billy’s help on the case. Her character is difficult and hilarious. She’s got enough chutzpah to carry a series of her own (that is if she can extricate herself from what is beginning to look like a soul-destroying role of equity partner in a successful but shadily-run law firm in Season 4).

Billy also has the help of beautiful sex worker/paralegal Brittany Gold (Tania Raymonde) and the loyal and efficient Marva Jefferson (Julie Brister).
The title Goliath, of course, refers to the opponents Billy and his tiny team face each season. In Season 1 it is the defense industry and their sleazy lawyers, who are former colleagues – and an ex-wife – of Billy’s; Season 2 they face a combination of corrupt politicians, businessmen and a Mexican drug cartel as Billy takes the case of the son of a friend who has been framed for murder; Season 3 is a legal battle with industrial agriculture about water rights in drought-ridden central California; and Season 4 finds Billy and his team facing off against Big Pharma.

Along the way, Billy is manipulated, beaten, drugged, shot and always underestimated, because in the end, his team prevails, but not with predictable results.
A series is only as good as the bad guys, and the bad guys here are piled up to include police, lawyers, judges, politicians, business people and all kinds of disgusting folks with hidden motives.
William Hurt has a recurring role as Billy’s former law partner Donald Cooperman, a physical and emotional wreck of a man who hides the burn scars on his face from his Vietnam war service by rarely leaving his darkened office. He now heads a large global law firm that he and Billy founded. Cooperman represents the defense contractor that Billy is after in Season 1.

Billy left the firm after a client he had gotten off a murder charge on a technicality killed an entire family, which sent Billy into the skid where we first meet him.
It isn’t clear just why Cooperman hates Billy McBride, but he makes it very clear that he expects to crush Billy McBride “like the bug that he is” in the defense contractor case.
Hurt serves as the main meany in Season 1, but there are also Dwight Yoakam as defense contractor CEO Wendell Corey, and Mollie Parker as Callie Senate, the Cooperman attorney who has a sleazy relationship with her boss (and Billy’s ex-wife) and is chosen to lead the case against Billy.
This series is full of surprising moments, but so as not to ruin it, I will just say there is a particularly big shocker in Season 1 that still has me shaking my head when I think about it, and it’s such a powerful scene, it’s hard to forget.
You’ll see lots of recognizable faces throughout the series, but you might not have seen some of them for a while. Lou Diamond Phillips is Oscar Suarez, father of the teen Billy defends in Season 2; Paul Williams is recurring character J. T. Reginald, who uses his massive contacts to assist Billy’s investigations; Sherilyn Fenn is a victim and Billy’s former college lover, Bobbi, in Season 3; Griffin Dunne is Bobbi’s husband; David Cross is a real estate agent and cover band musician in Season 2 and 3; Ileana Douglas has a ball as casino groupie Rita in Season 3; Beau Bridges is one of the fatcats Billy is fighting in Season 3; Graham Greene is the casino manager and administrator of exotic drugs to the fatcats in Season 3; Haley Joel Osment is the dopey heir apparent to Zax Pharma in Season 4; and 85-year-old Bruce Dern has an almost ghostly presence as Billy’s neighbor in Chinatown in Season 4.

Mark Duplass is one of the major baddies in Season 2, portraying developer/philanthropist Tom Wyatt. Wyatt’s kinkiness becomes a part of the story, and it is an odd twist that includes H. R. Puffenstuff and amputation. As he previously showed in Creep and Creep 2, Duplass makes an excellent creep.
Season 3 finds Billy facing off against brother-sister team Wade and Diana Blackwood (Dennis Quaid and Amy Brenneman): owners of a billion dollar almond farm that has thrived while the rest of the region has been in a multi-year drought. Quaid’s character isn’t pure evil. No, he’s just arrogantly rich so feels entitled to have all the water he wants. It’s the sister who was born with the evil genes.

I’m just getting into Season 4, so can only say that it looks like the ubiquitous J. K. Simmons, playing George Zax, head of Zax Pharma, maker of an opioid pill that the company always knew was addictive. will be the evil genius for Billy to foil in this final season. But there is always a twist.
Simmons does an amazing job in a cynical Broadway musical number in the opening of Episode 2, “Pain Killer,” telling the story of a young cheerleader’s addiction that began the legal proceedings against Zax and his accomplices.
Along with that sort of playfulness in storytelling, much of the series feels like its makers are paying homage to classic film noir. Billy McBride is most definitely a noirish anti-hero who smokes and drinks and runs contrary to the mainstream because he has a working moral compass.
It’s a great character that I will miss seeing more of. Is it just too much to hope that Amazon would commission a spinoff series starring Patty Solis-Papagian, occasionally consulting Billy McBride?
Oh, there is one other great thing about this series and her name is Lynda Kay. She’s a friend of Billy bob Thornton’s, and when director Lawrence Trilling said they needed a David Lynchian performer at the casino where Billy spends a lot of his time in Season 3, Thornton said they had to hire Lynda Kay, which they did, and she and her guitar and voice are electrifying. In Season 3 she performs two Roy Orbison songs, “In Dreams” and “Crying” (“In Dreams,” of course, references Lynch’s weird 1986 neo-noir
masterpiece Blue Velvet) and “Just Dropped In (to See What Condition My Condition Was In):” the song by Kenny Rogers and the First Edition that was put to such great cinematic effect in the Coen Brothers’ neo-noir masterpiece The Big Lebowski.
Seeing her on the series prompted me to order a signed copy of her double album Black & Gold, which features a duet with the late Lemmy Kilmister of Motorhead on a song called “The Mask.”
You can check out Lynda Kay for yourself at lyndakay.com