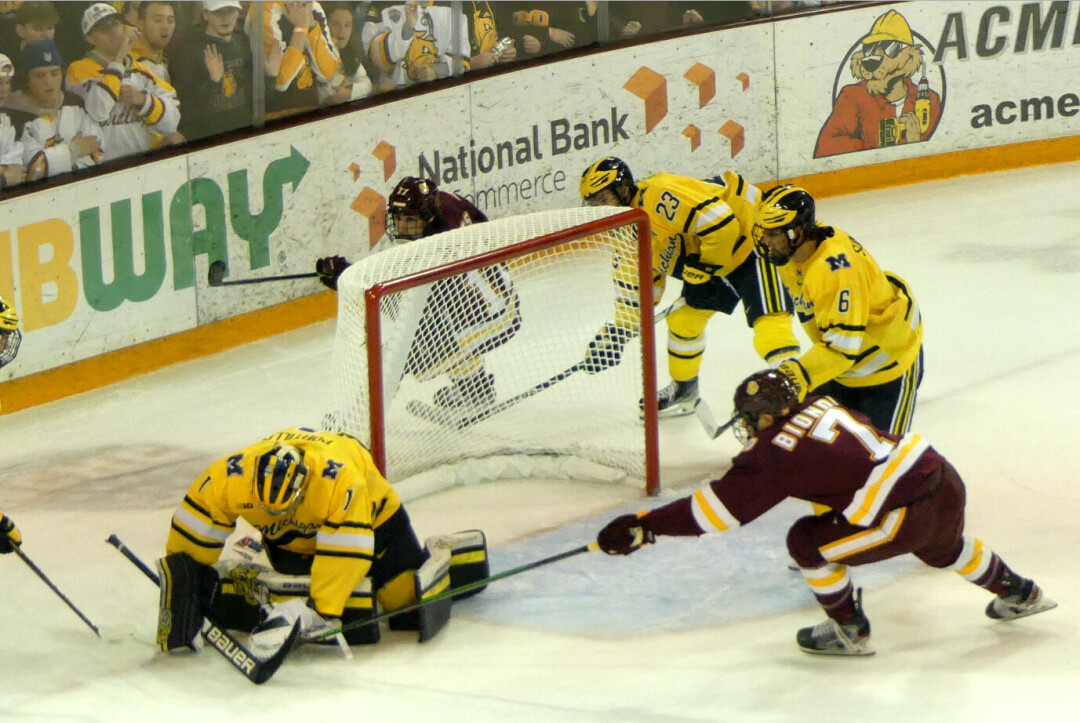 UMD’s Blake Biondi (No. 7) tries to poke a rebound away from Michigan goalie Erik Portillo. Photo by John Gilbert.

There were more great story angles than games last weekend, when UMD played host to the Ice Breaker tournament, an annual event that brings together four top teams, from all different conferences for a preview competition to give a fair appraisal of the lay of the land. Or rink.

In addition, the women’s top-ranked Wisconsin Badgers came to AMSOIL Arena to face UMD’s highly ranked Bulldogs to provide a start and finish to the six-game, three-day weekend.

As it was, with pro football and college football in full swing, and the Major League baseball teams putting on a fantastic league playoff show, it wasn’t as though there wasn’t a shortage of games to see.

UMD, for example, had its homecoming Northern Sun football game at Malosky Stadium Saturday afternoon, and defeated Concordia of St. Paul 33-13, after tiptoeing – emphasizing “toe” – to take a 3-0 halftime lead and a 12-0 lead on four field goals by Curt Cox before a touchdown outburst in the fourth quarter put the Golden Bears away.

And the UMD volleyball team took two more large strides to regain its contending spot in the Northern Sun, sweeping both Minot and Mary at Romano Gym on Friday and Saturday, respectively.

But hockey takes charge around here at this time of year. For instance, the Bulldogs have a huge home and home series against Minnesota in Minneapolis Friday night and at AMSOIL Saturday.

But last weekend, it was the Ice Breaker commanding the headlines, both because of sellout crowds and because those might have been the best three college hockey teams in the country, in Michigan, Minnesota State Mankato and UMD, while Hockey East’s Providence outfit could contend for that title.

That left the UMD women grasping for attention against the two-time defending champion Badgers.

Tough draw. UMD split with Minnesota last weekend and now got Wisconsin. The comparison is that the Bulldogs will boast to everyone within earshot that they have the most depth in coach Maura Crowell’s six years, while Wisconsin coach Mark Johnson sits back without complaining about NOT having any depth because four regulars – seniors Brittanie Curl and Natalie Buchbinder, sophomore Lacey Eden and incoming freshman Caroline Harvey – are all off with the U.S. National team, preparing for this winter’s Olympics.

“And then we lost three more to injuries in the second game against St. Cloud State last weekend,” said Johnson, whose pregame line chart showed nine forwards on three lines, with three pairs of defense. “We only have 11 forwards, total, in camp,” he said.

And they are still the best team in the country. They opened the weekend by beating the Bulldogs 3-0 as Makenzie Webster scored in the first period, watched Maddi Wheeler score in the second before putting in a power-play rebound at 19:35 of the second.

While that left the Bulldogs in the familiar position of claiming they “can play with anybody” with the high-tempo performance, Sunday’s finale featured a stunning turnaround.

Depth notwithstanding, UMD’s first line did it all, as Anna Klein scored twice in the first period, when the Bulldogs outshot the Badgers 9-1.

A fan expressed disappointment during intermission, because the Badgers came in with the big buildup. “Wait,” I suggested, “for the second period.”

Sure enough, Sarah Wazniewicz led the 19-shot second-period attack with a pair of goals to knot the game at 2-2. For good measure, she also set up Nicole Lamantia’s goal to open the third period for a 3-2 lead. UMD countered when Elizabeth Giguere connected on a pass to the slot by Gabbie Hughes for a 3-3 tie. Wheeler scored to regain the lead at 4-3 for Wisconsin at 12:47, but Giguere got her fourth of the season at 16:30 to equalize it again and the teams went to a 3-on-3 overtime. A Badger counterattack sprung Daryl Watts up the right boards on a 2-on-1. Her perfect pass was an easy one-timer for Casey O’Brien at the crease, and a 5-4 victory for the sweep.

The men’s semifinal doubleheader pitted UMD against Michigan in a rematch of their 2001 victory in sudden-death overtime, 3-2 over favored Michigan. That would be after Providence faced MSU-Mankato, the No. 1 ranked team in the country.

It was a typically tough battle, with Mankato capitalizing on “homecoming payback” for Reggie Lutz, a senior winger from Elk River, who cleared a few personal demons with a hat trick for  5-2 victory over the Friars.

“That’s my first hat trick,” said Lutz, who came to Duluth for the Section 7AA tournament as both a junior and senior. “But both times we lost in overtime to Duluth East. It seemed like every year, Mike Randolph would get East up and beat us to go to state. I can’t believe they got rid of him, because nobody else can do what he did there.”

Lutz scored Mankato’s first goal, and Ryan Sandelin, son of UMD coach Scott Sandelin, spun away from a checker and scored to make it 2-1 late in the first period. Lutz got his second goal midway through the third period, then knocked his third into an open net for the 5-2 triumph and a date in the tournament final.

Michigan, loaded with first-round NHL draft picks, bristles with speed, skill and outright talent, and is also among the youngest teams in NCAA hockey.

The Bulldogs hit the ice flying and took a 1-0 load on a first-period goal by Jesse Jacques. Impressive start, but the Wolverines turned up the tempo in the second period, tying it on a Luke Hughes power-play goal in the final minute of the session, after a nasty 5-minute major penalty on UMD captain Noah Cates.

Cates had forechecked begind the net, and the Wolverine defenseman ahead of him sensed Cates’s speed and stopped abruptly, straightening up Cates, and then knocking him down.

Flagrant interference? Undoubtedly, but no call.

When Cates got knocked down a second time, he jumped to his feet, overtook his adversary and delivered a nasty elbow that dropped him. The penalty was called for contact to the head, but without a doubt, had a penalty been called on the initial infraction, Cates would have considered the case closed.

The Wolverines kept the offense flowing, with two goals in the second and two more in the third, for a runaway 5-1 victory.

UMD got to play the late game Saturday, meeting Providence for third place, and the Bulldogs overcame a 1-0 first-period deficit when Jesse Jacques and Dominic James scored in the second.

The Friars tied it 2-2 with a power-play goal in the first minute of the third, and then Noah Cates made a spectacular rush at 3:20, putting on a burst of speed to freeze goalie Jaxson Stauber – son of Duluth’s Robb Stauber – and he whirled behind the net and stuffed his shot at the left post. That served as the winner, 3-2 in a very evenly played game.

The championship game was a classic. Michigan jumped ahead with a goal in the first minute of the second period, but Mankato came back for goals by Julian Naprownik and Sandelin to claim a 2-1 lead.

Michigan’s Jordan Bordeleau tied it on a rebound at 4:20 of the third period, and with 4:20 left, Brendan Brisson scored the winner in a 3-2 final.

“It was a good hockey game,” said Mankato coach Mike Hastings. “We made a few mistakes, and they capitalized. That’s a real quick team with a lot of skill.”

“We’re going to get a lot better,” said Michigan coach Mel Pearson, who grew up playing for Edina while his dad, Mel Sr., played for the Fighting Saints in the old World Hockey Association. “But I was happy with the outcomes. To come in here and beat Duluth and Mankato says something about our character. Those teams have some 25-year-old guys, we have 18-year-olds.”

Yes, but 18-year-olds drafted in the first round by the National Hockey League.