A spooky walk with extra legs 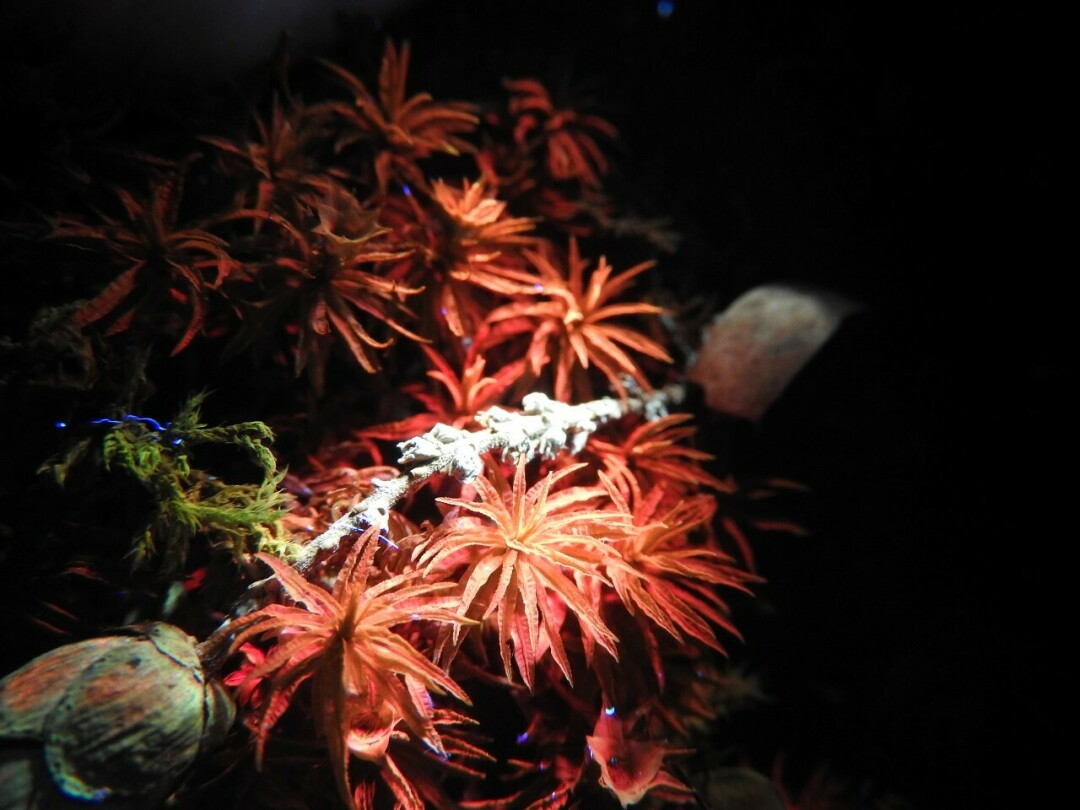 Shuffling restlessly around the house, I needed to do something else before bed. Scrub the sink? Nah. Read? I’d just fall asleep.

I looked out the windows: dark. Thick clouds obscured both stars and moon. But darkness in the woods hasn’t scared me for years, not since I had to swallow my own hesitations and put on a brave face to lead night hikes for kids at camp. We hooted for owls, played tricks with our night vision, tested our hearing, and experimented with smells. (I love night hikes so much that we offer them by request through the museum!)

Eventually I got so comfortable that I could walk across camp with no yard lights, no flashlight and no moon. I’d feel the gravel road under my feet, sense the opening in the forest at my turn, find the firm path through the woods, and let the soft duff warn me if I strayed off the edge.

To preserve my comfort in the dark, I shield myself entirely from horror movies and sinister mysteries. Nothing could entice me to watch The Blair Witch Project. I cover my eyes during the previews.

Now the main threats to my night explorations are simply adulting and going to bed early. Last night that restlessness got me out the door.

Instead of going entirely without light, I decided to bring my UV flashlight and camera along. Night is all about using different senses.

The UV flashlight interacts with our dominant sense of vision, but it also allows us to see the word in a different way.

Near a stump, the striated flesh of decaying mushrooms glowed blue. As I rested my hand to stabilize the camera, slimy, cold fungal goo oozed between my knuckles. Ew.

Nearby, the chlorophyll in moss fluoresced with a deep blood-red. The knobby twig of a hemlock tree arched across spiky moss tufts like a tiny backbone. Who needs a haunted house when you’ve got the woods? 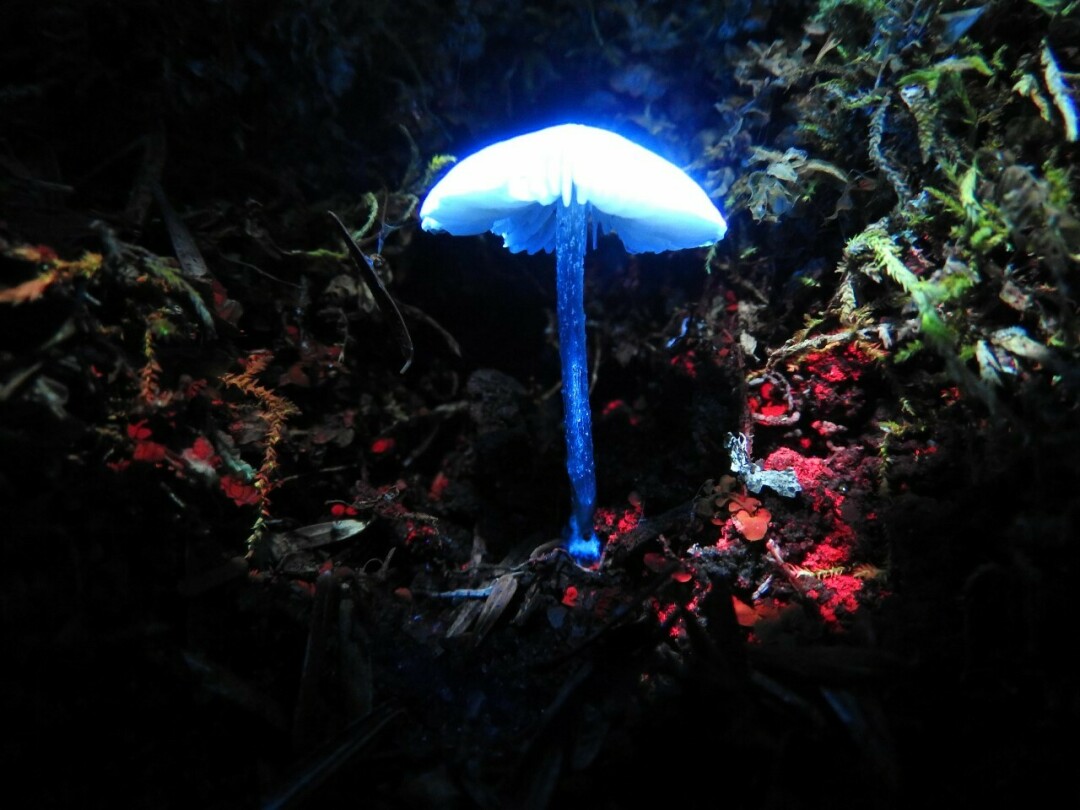 Near another stump, a decaying lump of white fungus – once a choice edible called abortive entoloma – glowed pink and blue from spots of mold. The entoloma by itself is a boring gray mushroom. But when it attacks a nearby species of honey fungus, their bodies merge to form a tasty white nugget nicknamed “shrimp of the woods.”

Most of these finds are cryptic and the colors faint. I have to hold both the UV flashlight and my face close to the ground in order to experience all of the shades and textures.

Occasionally, though, a shimmering specter reflects my beam. Such was the case with a small white mushroom – not parasitized or molding – but displayed regally in a little alcove like a ghost bride in her gown. I snapped a dozen glamour shots of this beauty, playing with the angle of light to maximize the glow.

Hundreds of creepy legs tickled the moss as the millipede burrowed away from my light. It must have hit a roadblock, though, and two segmented antennae poked out again from behind a lichen flap, followed by the rounded head. As I watched it crawl away, the graceful, sequential motion of the legs reminded me of a witch’s fingers as she casts a spell. 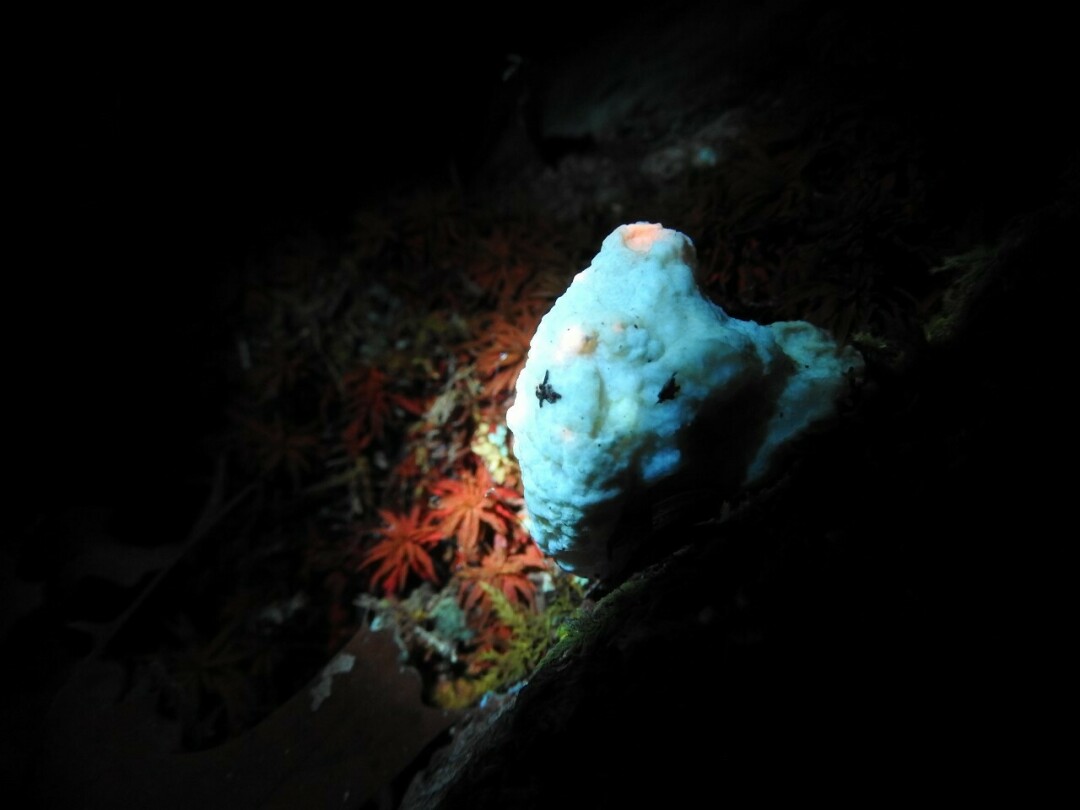 Sometimes called “shrimp of the forest,” abortive entolomas are choice edible mushrooms…except when they are covered in mold that fluoresces pink and blue. Taken using a 365nm UV flashlight.

Millipedes go back farther than witches, though. 400 million years ago, when oxygen levels were higher, their ancestors grew to be six feet long! That’s as close to a horror movie as I need to get.

They may look scary, but millipedes don’t bite. They mostly shred up rotting leaves and assist with decomposition in the soil. They won’t slime you like a slug. They don’t have 1,000 legs, but they do have two pairs of legs per abdominal segment, as compared to centipede’s single pair. And, if I’d been a little more intrusive with my light, their genitalia fluoresce in unique colors that give scientists an easier way to tell apart the purported 70,000 species worldwide.

I often say that I’m not interested in writing fiction because Nature has already come up with plenty of good stories I can tell. The same goes for fictional horror films, I guess.

Who needs fake monsters when the ones along my driveway give me that same thrill? Creepy, slimy, gross, and also fascinating, beautiful, and part of a healthy ecosystem.

Feeling restless with the early dark? Take a night hike and let Nature be your Halloween!

Emily M. Stone is Naturalist/Education Director at the Cable Natural History Museum. Her award-winning second book, Natural Connections: Dreaming of an Elfin Skimmer, is now available to purchase at cablemuseum.org/books and at your local independent bookstore, too. For more than 50 years, the Cable Natural History Museum has served to connect you to the Northwoods. The museum is now open with our exciting Mysteries of the Night exhibit. Follow us on Facebook, Instagram, YouTube, and cablemuseum.org to see what we are up to.