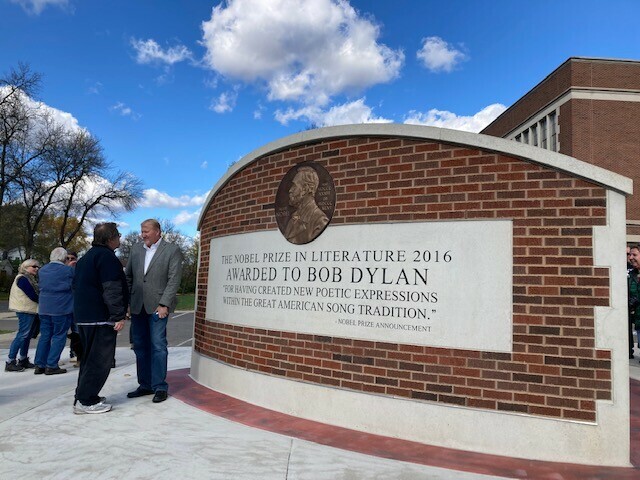 “A song will lift
as the mainsail shifts
and the boat drifts on to the shoreline.
And the sun will respect
every face on the deck
the hour that the ship comes in.
Then the sands will roll
out a carpet of gold
for your weary toes to be a-touchin’
and the ship’s wise men
will remind you once again
that the whole wide world is watchin’.”

Fifty-seven years after he wrote those song lyrics, after he blazed new lyrical and musical trails, electrified folk music and seismically shook up “rock and “roll,” after he released 35 studio albums, 15 live albums, won 10 Grammy Awards, was awarded, in 2008, a Pulitzer Prize, and, in 2016, the Nobel Prize for Literature, the ship literally came in for 1959 Hibbing High School graduate Bob Dylan when, on Saturday, Oct. 16, the first architectural tribute to his songwriting legacy was unveiled on the west side of his alma mater.

Although Dylanesque historic and musical events took place in Hibbing throughout the day and night, the dedication of the first-of-its kind, permanent public tribute to Bob Dylan’s lifelong songwriting quest began in front of a celebratory crowd at one o’clock just outside the high school’s number 16 doors that run parallel to Bob Dylan Way.

The unveiling of the Hibbing Dylan Project, the name 10 community members gave to their committee that fundraised, that navigated corporate and public waters for five years before it sailed off the drawing board and into its interactive, red brick, stainless steel and bronze life, began with music performed by Hibbing High School’s band and was followed by welcoming remarks by the project’s manager Scott Allison.

Northern Lights, the school’s choir, directed by Will Seykora, then sang a spirited interpretation of the Dylan-Darius Rucker hit “Wagon Wheel” that Hibbing High Class of ’22 singer and songwriter Toby Inforzato followed by performing, with cogent guitar and harmonica playing, of one of Dylan’s signature songs “Mr. Tambourine Man.”

The enthusiastic applause Inforzato received blew away the afternoon like a fall wind off Lake Superior and proved that the song’s freewheeling, poetic lyrics and spirted tune enamor ears today as much as they did when the song’s author first performed the song at London’s Royal Festival Hall six decades ago.

Katie Fredeen, President of the Hibbing Dylan Project, then shared how, within days after the news broke on Oct. 13, 2016, that Bob Dylan was the first songwriter to receive the Nobel Prize in Literature, “For having created new poetic expressions within the great American song tradition” the project’s committee came together, gained its nonprofit status, and worked for four-and-one-half years in order to cobble together the more than $400,000 needed to undertake and complete the outdoor architectural installation.

What was the vision of the project’s visionaries? “Our vision is to create a place of inspiration, giving new dimension to Bob Dylan’s lyrics and poetry,” stated the members of the Hibbing Dylan Project, whose hibbingdylanproject.org is their Facebook address.

“We built this tribute to Bob Dylan’s words and music for today’s and tomorrow’s students of Hibbing High School and for its current, retired, and future teachers,” noted Fredeen, who then introduced Gareth Andrews, one of two of the artists involved in the project.

In keeping with educational focus of the dedication ceremony, Andrews spoke about how important it is for artists of all kinds to learn from their successes, from what people cheer on in their creations as well as to learn from what does not seem to strike a positive cord with those who experience their work. He concluded by challenging students and adults, whether artists or not, to “keep dreaming.”

Prior to Mike Miesbauer and Bob Corradi wrapping up the dedication, by singing one of Dylan’s popular sing-a-longs, “You Ain’t Goin’ Nowhere,” the project’s board members were recognized for their mutual “labor of love” and applauded, and Fredeen and Allison formally presented the tribute project to Superintendent Richard Aldrich who, with gratitude and pride, shared how much the tribute and its prominent place on the high school’s campus would mean to Hibbing’s schools and its students.

What were the thoughts some of those who attended the dedication ceremony? Babe Glumac, who works at Hibbing High school, shared that he came to the project’s unveiling because, as a Dylan fan, he loves the songwriter’s lyrics and feels his songs have changed the world, especially the world of music from the Viet Nam era through today.

Deb and Rick O’Gara, who provided sponsorship-level funding for the project, felt the completed tribute was artistically exceeded their expectations, that the project’s committee for years worked so hard to bring the project to fruition, that the incorporation of the bronze chair into the overall design of the project was “right on,” and the creation would be lasting in its impact.

Toby Inforzato, the aforementioned high school senior who performed at the ceremony, said having the tribute at his high school meant a lot to him since he is “a huge Dylan fan,” who feels good about the songwriter receiving such community recognition, and he sees Bob Dylan as, “one of the most influential musicians of all time.”

The bronze chair for visitors, a keystone element within the work, he felt was “perfect” and described as “beautiful” the excerpts of fifty of Dylan’s songs that flow in various directions across the tribute’s wall that faces his school.

About the eye-catching wall of Dylan’s lyrics, he hoped, “Visitors and tourists will come pick out their favorite songs and think about them. I really like that part of the project.”

David Rian, for three years an elementary school classmate of Robert Zimmerman, years before, for what is thought to be performance purposes, “Zimmy” changed his name to Bob Dylan, recalls their playing sports and how Bob, during those early school days, regularly played piano.

Gene LaFond, a friend of Dylan along with their mutual friend Larry Keegan, from their teens as well as during the decades of the songwriter’s growing fame, pointed out, “The best thing that I learned was that Bob considered himself a human being not anyone’s idol. He was and still is always moving forward to create. He certainly encourages people to follow their own inspiration.”

At the conclusion of the unveiling of the tribute to Minnesota’s best-known, poet-musician the crowd began to thin out, however, lots of folks walked up and wandered around the tribute, took pictures of it, and took “selfies” within it.

Behind me someone proclaimed, “Well, it’s all over!” Concurring voices followed.