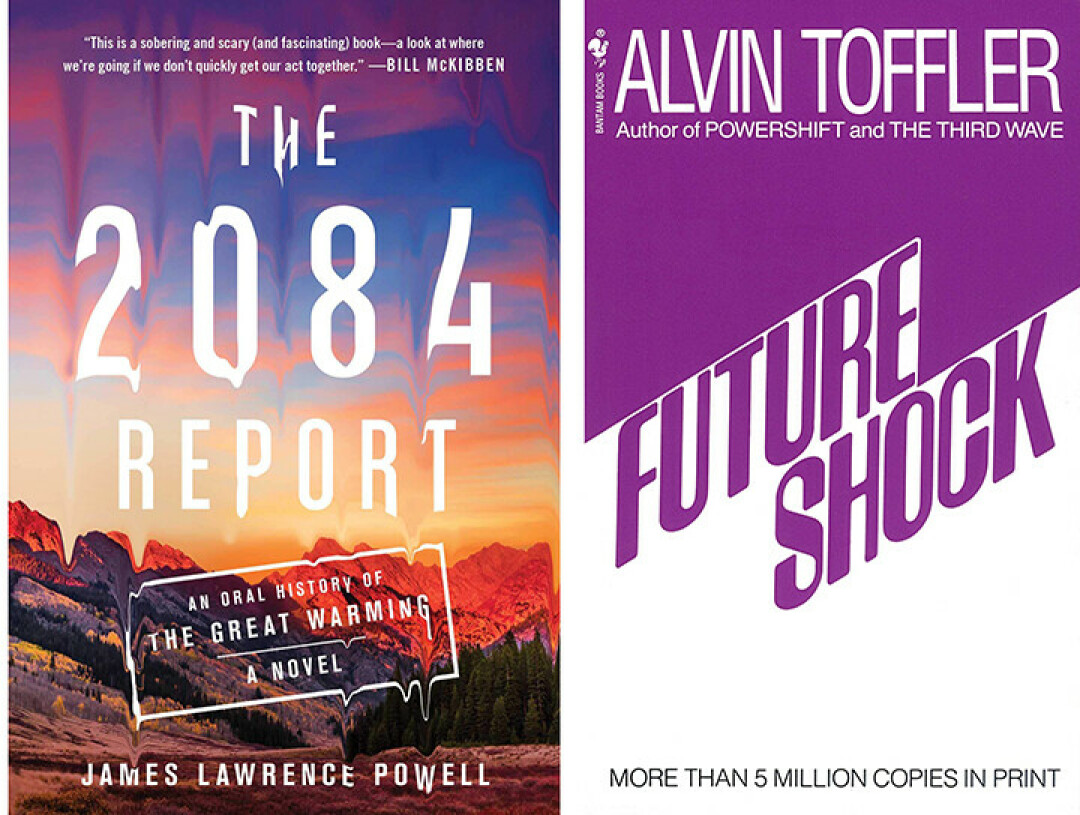 In his novel The 2084 Report: A Novel Of The Great Warming, James Lawrence Powell uses the model of oral historian Studs Terkel to present a collection of interviews with climate scientists, journalists, engineers, anthropologists, geologists and public officials in the year 2084. Throughout this science fiction narrative it becomes very clear that we’ve experienced a full spectrum of climate events that have significantly impacted the lives of billions in every country and corner of the world.

One of the early interviews in the novel is with Steve Thompson, a retired hydraulic engineer who lives in Phoenix, Arizona.  Thompson talks about a citywide program in 2027 where each house had a remote control valve that limited how much water a family could use in 24 hours. Watering lawns was outlawed and having a showerhead is illegal.

Later in the novel, we hear about two players dying from heat stroke at the last Australian Open Tennis Tournament held in 2028.

Also in 2028, New York City experienced a big nor’easter that poured rain on the city for days, shortened out the entire subway system, covered LaGuardia Airport with a foot of salt water, and killed 3,000 people.

Miami gets hit with a Category 4 storm in 2056 that slams Miami Beach with a 33-foot storm surge and waves coming inland for half-mile. And Rotterdam is evacuated in 2052 after the great flood kills a third of the city’s population.

Reading science fiction novels about the climate crisis in the future or assessments within today’s scientific community about the current climate emergency, I really wonder and question if Duluth is ready for what’s coming. Are we taking the time to seriously consider the different scenarios of what our collective future may look like given the present and projected climate events that we will experience?

Do the 2035 and 2050 plans for Duluth represent a realistic picture of what we’ll probably be facing? Have we seriously considered the climate possibilities for our city within the next 5 to 10 years? Are we incorporating future studies and the most current climate science into the planning and visioning of our city’s future?

Actually, there is no Duluth 2026 Report. But there should be.
Instead of only focusing on business and jobs, we should also identify climate and environmental challenges that Duluth needs to address in the next five years. Climate will affect and impact every facet of our city.

Have we set our priorities and established climate protocols in city government? Is the Chamber of Commerce preparing its members for the climate changes’ impact upon business development and job creation? Are our civic leaders exploring how climate change will impact different social and economic groups in our city?

When it comes to getting our city leaders and community stakeholders to take notice and move forward, wonder where the reluctance or resistance is coming from. Wonder why so many don’t want to talk about climate change and plan for the future. Wonder who or what is pulling the strings to keep our city from being more proactive and productive.

Climate events are happening faster and with more severity than we had expected.

This is not an easy topic or issue to think or talk about. Climate change is challenging all of our assumptions and expectations about our personal and public lives. Very often, it’s hard to comprehend and digest.

In his 1970 classic Future Shock, Alvin Toffler writes about people’s psychological struggles with change, especially when it begins to take place at a faster pace. Also, he talks about the mental and emotional stress of taking in new and more information in a shorter amount of time while facing new social, cultural, technological and environmental shifts in one’s everyday life.

Given the growing and accelerating challenges of climate change, it would appear that many of us are struggling and therefore, avoiding or distancing ourselves from even thinking about or contemplating what the future may have in store for us.

“Rising rates of change thus compel us not merely to cope with a faster flow, but with more and more situations to which previous personal experience does not apply. And the psychological implications of this simple fact are nothing short of explosive,” stated Toffler. He reminds us that our responses to any “future shock” can be marked by anxiety, confusion, irritability and even withdrawal into apathy.

In dealing with the future, Toffler encourages us to be insightful and imaginative.
Likewise, Neala Schleuning in her book Climate Chaos asks that we see everything around us in a “real world context.”

Also, she wrote, “Creating a new world requires an openness to change and reinforcement of the belief in the power of people to embrace change.”

How do we create that space here in Duluth for all of us to explore what the future is telling us, and at the same time, provide an opportunity for the greater community to learn about climate change and contribute to a serious conversation about how we should prepare for the climate events that are headed our way?